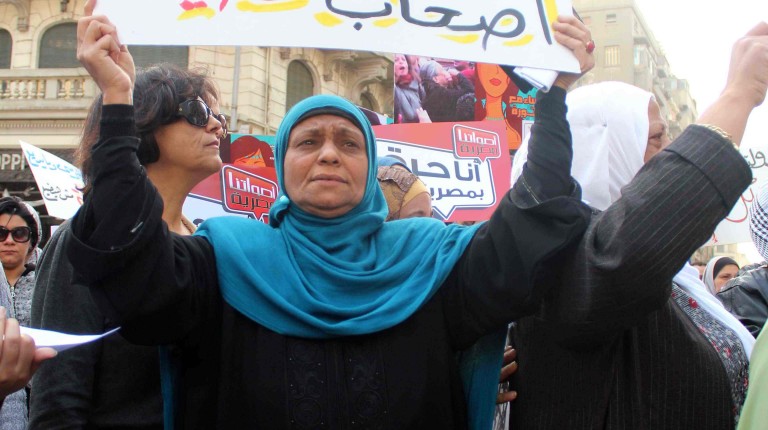 Despite progress on the political level, gender equality status remains low in terms of economic and social empowerment and violence against women, the Egyptian Centre for Women’s Rights (ECWR) said in its annual report on Wednesday.

Following the parliamentary elections in October 2015, the number of female representatives significantly increased to about 14% compared to previous parliaments in Egypt, the report noted. However, the report contended that progress was otherwise slow.

Sahar Salah, researcher at the ECWR, told Daily News Egypt that the report aims to shed light on different indicators of women’s rights issues locally and internationally. It also aims to contribute in the decision-making process in advancing the status of women’s rights in 2016.

The report tackled areas of civil and political rights, social and economic rights, and violence against women.

The 2015 cabinet reshuffle was disappointing, according to the report. “Only three women were appointed for the ministries of social solidarity, international cooperation, and immigration, out 34 ministries,” it read.

However, the number of women in leadership roles saw some development in the area of judges’ appointments. According to the report, 26 women judges were appointed in primary courts A and B, in the Administrative Prosecution.

“This follows significant efforts from civil society calling on engaging women in the judicial sector, yet the normal route is still blocked for law school graduates.”

As for economic empowerment, the percentage of female civil servants was only 25%, according to the latest census by the Central Agency for Public Mobilization and Statistics in 2015. The ECWR report highlighted more women working in the informal sector as domestic workers, at approximately 20,000 women.

“The absence of a legal umbrella for this job subjects those women to violations and the squandering of their rights,” the report read.

The past period has seen little to no improvement in terms of violence against women. One in every four married women were subject to domestic violence by their husbands, according to the report.

Domestic violence represents not only a humanitarian crisis, but also an economic one, according to the ECWR. The consequences of dealing with such violent results in lower salaries for women because of repeated absences from the workplace, and high cost of their medical treatment.

The confessions of Egypt’s married women