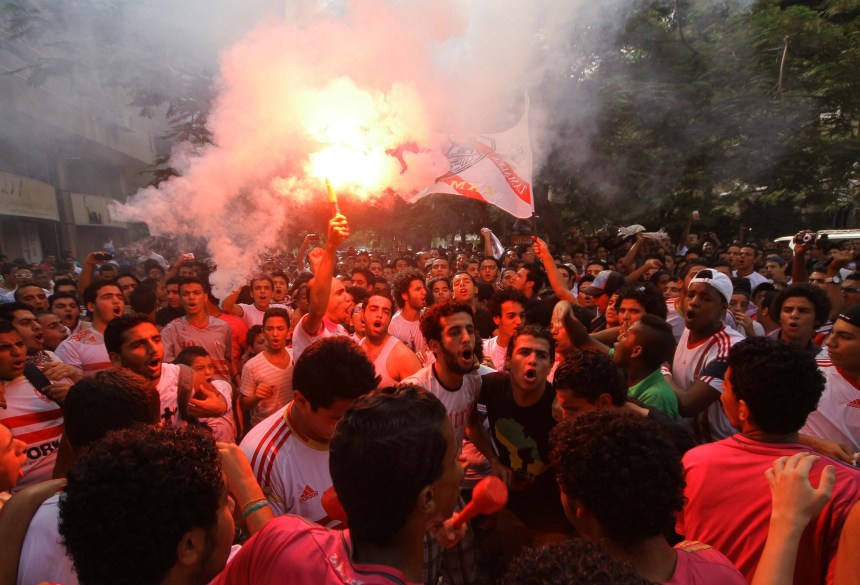 The Ultras White Knights (UWK) cancelled their plans to attend the African Cup of Nations match on Saturday evening.

In a statement issued on their Facebook page, the group cited fears of an “uneven battle” between the Ultras group and security forces. They feared a repetition of the events of the “Air Defence Massacre” in which 20 Al-Zamalek fans lost their lives.

On 8 February 2015, an Egyptian premier league football match between Al-Zamalek SC and ENPPI took a violent turn as fans were attempting to enter the Air Defence Stadium. Many were killed when security forces violently dispersed fans crowding the entrance to the stadium. Fans were trapped inside a metal walkway leading into the stadium.

Ultras Ahlawy and UKW), the militant groups supporting Al-Ahly SC and Al-Zamalek SC respectively, issued separate statements Friday morning stating their intentions to attend their respective matches. At the time of publication, the Ultras Ahlawy plan to uphold their intention of attending.

The statements came in defiance of a Ministry of Interior order banning football fans from attending matches, amid growing security concerns. The order has largely remained in place since the events of a 2012 match between Al-Ahly and El-Masry SC which led to the death of at least 72 Al-Ahly fans.

Both groups stated that in attending the matches, they are exercising their right as football fans to support their respective teams.

In addition, both groups said they are prepared to provide their own security for fans entering and exiting the stadiums. Both groups have done so in the past, on a smaller scale, whereby they attended and provided security in handball and basketball matches.

Ultras Ahlawy said, in its statement, that whoever wishes to prevent fans from supporting their teams is taking away their guaranteed rights.

The UWK, on the other hand, questioned why the state continues to have football matches without fans, and whose interest this decision benefits.

The group also used the statement to condemn Mortada Mansour, the club’s president. They raised questions about Mansour’s role as president of the club, questioning whether he has contributed to preventing fans from going to matches.

In a videotaped response, Mansour warned UWK members against attending the match, stating that the club is acting out of respect for the Interior Ministry, the state, and in fear for the safety of the ultras members themselves.

There has been contentious debate following the deaths regarding the role the security forces had in the deaths of fans in both the Air Defence Stadium incident and that of the Post Said Stadium, where it is widely believed that security forces locked the doors of the stadium from the outside and stood by as violence ensued inside the stadium.

Furthermore, Mansour has consistently issued attacks on the UWK, branding them as “thugs and thieves”.

The Interior Ministry issued a statement on its official Facebook page, maintaining the necessity that all fans follow the regulatory procedures banning fans from attending the match.

Both matches will be played Saturday evening.