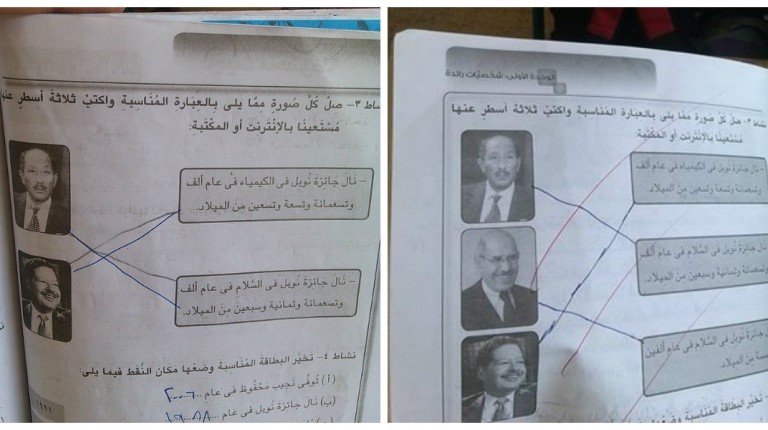 However he said this decision dates back to over a year ago, under the rule of former minister Moheb Al-Rafie. “I am surprised that this issue has resurfaced now,” he said.

According to Hassan, when the ministry asked the committee responsible for the national curriculum about the reason behind the removal they stated that it was based on complaints by students’ families.

“The families complained that this exercise was too advanced for the students’ cognitive abilities,” he said. “There were not any political motives behind the removal.”

“I am personally not convinced by the purported claim that the exercise was too hard for students,” Hassan told Daily News Egypt.

Minister of Education Al-Helaly Al-Sherbiny launched an investigative committee to discover whether this is, in fact, the real reason behind the removal of this exercise.

Hassan added: “We could disagree with ElBaradei politically, to the extent of criticising him, but we cannot rewrite history and nobody else can modify a historic fact.”

Dozens of social media users and political advocates expressed their concern about the removal ElBaradei’s name from the curriculums as he is an Egyptian Nobel prize winner.

“Removing a scholar’s name from papers is not degrading per say, but history will remember your ignorance,” tweeted TV anchor Liliane Daoud. The tweet was also reposted by ElBaradei’s official account.

ElBaradei has often been at the center of controversy for his critical political stance since 2011. He took part in the 25 January Revolution and was later accused of involvement in the United States invasion in Iraq in 2003.

He opposed the 30 June uprising in favour of democracy, and he resigned from his position as vice president of foreign affairs under interim president Adly Mansour in mid-August 2013 following the deadly dispersal of Muslim Brotherhood sit-ins.

In 2005, he won the Nobel prize during his post as director of the International Atomic Energy Agency (IAEA) for his efforts to contain the prevalence of nuclear weapons.

Who is responsible for the disbanding of the national partnership?