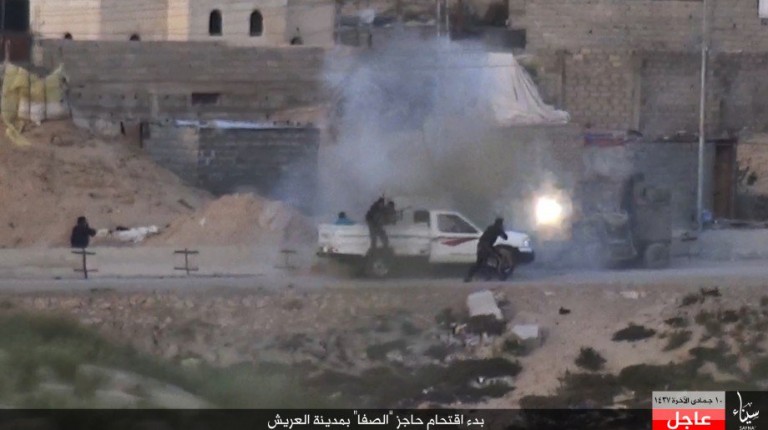 A police officer and solider are reportedly missing in action following the deadly attack against El Safa checkpoint in Al-Arish city on Saturday evening, resulting in the death of 15 police officers.

Media reports indicated on Monday evening that a police officer named Mohamed Abdul Rehim is missing in action, along with a solider, following the raid on their checkpoint. The reports argued that militant group “Sinai Province” may have kidnapped them.

“We are not normally aware of the details of his work. He did not inform us about his exact location in North Sinai, where he has been serving since 2012. I only heard about the attack though media reports,” brother of the missing police officer Ahmed Abdul Rehim told Daily News Egypt on Tuesday.

Three hours before the attack, the brothers spoke on the phone. Mohamed informed his brother that he was about to start his security shift, without clarifying exact his exact position.

He said several police officers from North Sinai, colleagues of Mohamed, called him after the attack asking for his brother’s phone number as they suspected he was among the 15 killed.  He immediately tried calling his brother, only to find that his phone was off.

“I kept trying to contact him, but his phone is still off. Then I contacted Al-Arish police station and the Investigation Bureau in the Interior Ministry. They informed me that the preliminary investigation did not find anything,” Ahmed said.

“My brother informed us several times that he is enjoying service in North Sinai and that he will renew his service’s period for one year.  Our family needs to know his whereabouts; we are living in a state of uncertainty,” he said.

Ahmed demanded that the Interior Minister and Egyptian armed forces reveal the facts about his brother’s fate, whether he is injured, kidnapped, or dead.

The Ministry of Interior media office told Daily News Egypt that an official statement will be published in state-run newspaper Al-Ahram denying kidnapping. The missing police officer is believed to be among the 15 killed.

The ministry insisted that Mohammed Abdel Rehim was killed, despite Ahmed saying that his brother’s body has not been returned to them, if this is indeed the case.

On the ground, the Egyptian Air Forces launched air raids on a house located south of Rafah, believed to belong to IS-affiliated militants. The raids killed 20 militants and injured 30others, according to media reports.

President Abdel Fattah Al-Sisi held a meeting with Minister of Defence Sedki Sobhi and Interior Minister Magdy Abdel Ghafar on Tuesday in the attendance of high-ranking officials from the armed forces and police.

Al-Sisi discussed the security status inside North Sinai after the deadly attack on Al-Safa checkpoint. He asked police and armed forces to co-ordinate efforts to eliminate terrorist members inside Sinai, according to official statement issued by the presidency.

On Monday, Abdel Ghaffar vowed to “punish” those involved in Saturday’s deadly attack, during a meeting with high-ranking ministry officials. Abdel Ghaffar asked police officials to “increase strict security measurements by intensifying campaigns targeting terrorists”, according to an official statement issued by the ministry.

IS affiliated group “Sinai Province” claimed responsibility for the attack in a statement, and published photos documenting the attack, including photos of police weapons and
IDs.