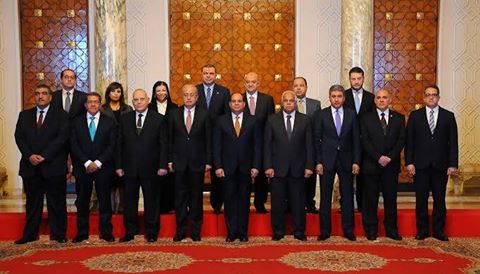 Ten new ministers were sworn in Wednesday before President Abdel Fattah Al-Sisi in an anticipated cabinet reshuffle, ahead of the parliament vote on renewing trust in the government later this month.

Further, a new ministry was added, the Ministry of Public Sector Affairs, for which Ashraf Qadry Al-Sharqawy was appointed minister.

According to a presidential statement, three new deputies for the minister of finance were appointed: Mohamed Ahmed Moeit for treasury, Amr Ibrahim Al-Moneir for taxation policies, and Ahmed Ashraf Kojak for finance policies.

Further, Nihal Magdy Al-Mogharbel was appointed as deputy minister of planning for monitoring.

The cabinet reshuffle notably excluded Minister of Health Ahmed Emad El-Din, who has come under heavy criticism in past weeks due to conflicts with the Doctors’ Syndicate.

The syndicate garnered massive support during a general assembly in February, calling for his dismissal for repeated failures to protect doctors from attacks, among other demands.

Rashwan Shaaban, deputy secretary general of the syndicate, told Daily News Egypt following the swearing-in ceremony that the exclusion of the health minister from the reshuffle came as no surprise to the syndicate, as they received indications that he would remain in the position ahead of the reshuffle.

“It is more about intransigence; they’re thinking: ‘we’re not going to change the minister then have the syndicate oppose the new minister and have to change again’.”

Shaaban said the syndicate is insistent upon its stance and demands, including the dismissal of the minister. Unvexed by the news, he said: “Have any of the doctors’ demands been met to warrant expectations that this one would be?”

Instructions for the new ministers

Ismail said, in press statements at the cabinet headquarters following the swearing-in ceremony, that the upcoming period will see major coordination between the ministries of civil aviation, tourism, and antiquities to revive the tourism sector and boost its revenues.

The prime minister revealed that he is currently looking for a replacement for the governor of Cairo, after the former governor was appointed as the minister of transportation.

Ismail moreover responded to critical comments directed at the government for not dismissing the ministers of health and education, stating that the performance of the current ministers will improve in the future and that both of them outlined a clear plan to develop services in their fields.

Minister of Education El-Helaly El-Sherbiny has also been the subject of popular criticism due to perceived underperformance in his capacity.

“It is difficult to evaluate the performance of the two ministers in such a short period. Both sectors suffer from many problems that developed through the years,” Ismail continued.

With regards to the establishment of a new ministry for Public Sector Affairs, he said this comes amid government efforts to provide due attention to the public sector and increase its revenues. This will benefit the companies in the sector by working to increase their capital through the stock market listings, he noted.

He added that the new minister is responsible for the economic management of these companies.

PM to hand list of 8 reshuffled ministers to Al-Sisi: source