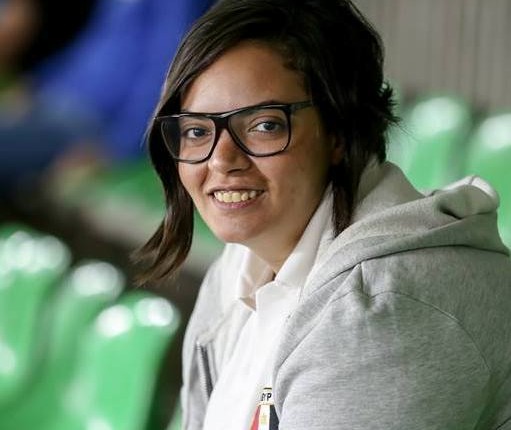 El-Askary, 26, started playing billiards at age nine, then began playing snooker when she was 20. What drew her to snooker was that, while billiards is simply a “pocket the ball and score” game, snooker is far more strategic, which is why El-Askary decided to play.

The only thing billiards and snooker have in common is a wooden cue, she says. “Snooker is more like chess; you can score points by trapping the other player.”

Her first national championship was at the Shooting Club in 2011, where she participated in a special round held during Ramadan. “I was the only woman participating. It was a surprise as it is not common for women to play this sport in Egypt. I only won one match,” she added.

In 2014, the president of the Egyptian Federation of Billiards and Snooker, Mohamed El-Kamah, nominated her to participate in the IBSF World Team & 6 Red Championships (six-red refers to playing with the six colour balls and six reds), held in Sharm El-Sheikh.

“I was proud to be the first Egyptian woman to represent Egypt in an international championship for snooker,” she said.

Following her nomination, El-Askary searched for another woman in Egyptian clubs to play with her in the team rounds for snooker at the upcoming international tournament. She says she was fortunate to meet Maha Helmy from the Heliopolis Sporting Club.

In the team rounds, the teams from Australia, Russia, Hong Kong, and India were much more advanced, and the duo of El-Askary and Helmy were defeated in the first round.

However, in the six-red competitions, where the only African teams were Egypt and Morocco, El-Askary managed to defeat Morrocan Hayat Shaker with a score of 3-1. Helmy also defeated a Syrian player, 3-1.

“Helmy and I were the first Arab women to win in an international championship, as the sport is not commonly played by women across the Middle East,” she said.

In 2015, El-Askary and Helmy wanted to expand the women’s team. They discovered Salma Mousa, 14, at the Zamalek Sports Club. And so, Egypt’s national women’s snooker team came to be represented internationally by the three of them.

However, during the same year, Egypt was unable to participate in the first African Snooker Championship, in Tunisia, due to internal problems within the federation and in the Ministry of Sports.  It was South African Jeanne Young who won this championship.

In October of that year, the World Snooker Championship singles competitions were held in Hurghada. The winner was Belgian Wendy Jans. Although El-Askary did not win this championship, she pointed out that “for me the most important victory was defeating Africa’s reigning champion, Jeanne Young, with a score of 3-1”.