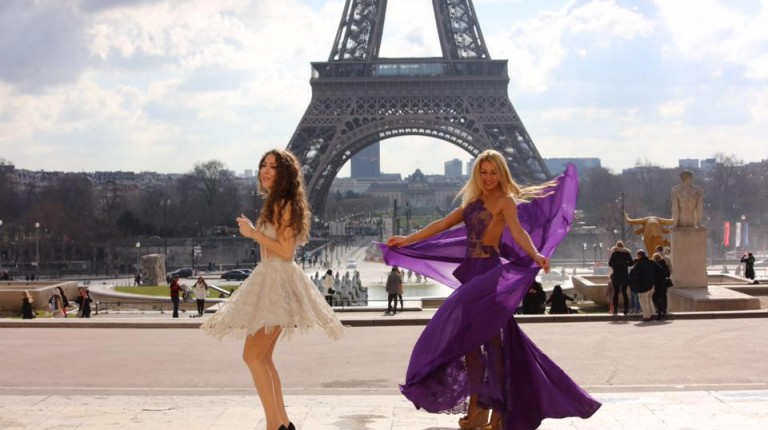 In November 2014, up-and-coming designer Alia El-Nahass presented her designs on the runway for the very first time to an enthusiastic fashion crowd. Today, El-Nahass is one of Egypt’s established talents who has managed to cross borders and win an iconic award.

A’Lia is El-Nahass’s method of linking Egypt and Paris through embroidery and lace. The couture designer is highly influenced by the French school of embroidery and dreamy gowns.

In her first show at Paris Fashion Week (PFW), El-Nahass not only managed to prove that A’Lia is surely on its way to becoming one of the region’s top brands, she also won a third prize in an award, owing to her authentic designs that gave Paris a glimpse of Egypt.

The designer met Daily News Egypt to talk about her participation in PFW, the new collection, and the obstacles she has faced over the past year.

Why did you choose to make your international debut at Paris Fashion Week?

The organisers actually contacted me. The team contacts a few designers; they study local markets thoroughly and reach out to those who meet their criteria. There was a long interview process and after the final stage, I was accepted.

Even when they contact a designer, he or she still has to fill in applications and go through the process just like everyone else.

As the only Egyptian designer participating in this season of PFW, what did you aim to add?

A new aesthetic and culture—basically new everything.

Tell us about your new collection.

“Bedazzled” is the autumn collection of 2016/2017. My main inspiration was ancient Egypt; such as the Pharaonic goddess, Nefertiti. I wanted to take a piece of our culture right into the heart of Paris.

I had eight different dresses. I maintained my signature embroidery as well as my usual choice of light-weight fabrics. All the fabrics used were imported; my team and I hand stitch all the details.  My team consists of just four members so I do many things by myself.

How would you define your clientele?

I cater to various types of clients; they have different styles and are of different ages. For instance, I create prom dresses for 17-year-olds, as well as brides and their entourage, including mothers.

However, I believe that what I give to all of these ladies is my flair for sexy and daring designs. I usually depend on unexpected cuts and silhouettes.

Where did you study fashion?

The Italian Fashion Academy, where I learned everything about patterns, cuts, and sewing. Furthermore, I have taken few courses in Dubai to master embroidery and detailing.

What are the greatest obstacles that you have met since launching your brand?

The biggest obstacle is fabrics. At the beginning, I used to source my fabrics from Egypt, which does not have a great selection. Accordingly, all other designers used the same fabrics, so all designs and collections were incredibly similar.

Tailors are also a problem in Egypt. It took me so long just to find two skilled tailors. With that said, I still had to teach those two before giving them work. They were not the best; yet, they showed great potential.

What is next for A’Lia?

Ultimately, I dream of going international; it is every designer’s dream. For now, my next step is establishing my own atelier.

Route Cairo Paris: a window for local talents at PFW

Temraza starts 2015 in Paris and ends it in LA

Farida Temraz – A lady on the path of education evolution