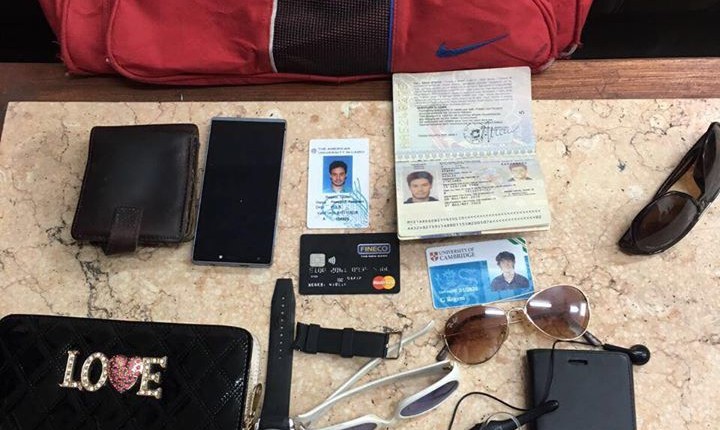 Nearly two months after the body of Italian researcher Giulio Regeni was found dumped on a desert road with signs of torture, and amid international pressure to find the murderers, Egyptian authorities suggested Thursday to have possibly uncovered, and killed, Regeni’s killers.

The Ministry of Interior announced Thursday night that it found belongings of the Cambridge University PhD student in an apartment in Qalyubia, near the capital.

“A red duffel bag was found, including a brown wallet, the passport of Regeni , his Cambridge University ID card, and a visa card,” an official ministry statement said.

The ministry also said that the bag included other things such as another wallet, a sum of EGP 5,000, three sunglasses and a female wrist watch.

“Brownish stuff was also found, it looked like hashish – a form of cannabis drug,” the statement added.

Earlier on Thursday afternoon, a statement released by the ministry said that security forces “succeeded in targeting” a criminal gang, near New Cairo area, which specialised in “impersonating policemen” for purposes of kidnapping and robbing foreigners living in Egypt.

In fact, the ministry said it killed all four members of the gang, who exchanged gunfire with the police during their arrest.

Local media reports – including state media – then quoted ‘anonymous’ security sources claiming the gang could potentially be linked to the murder of Regeni. Then, they reported that the prosecution general authorities denied such ties, until the ministry’s latest revelation late Thursday night.

In a detailed statement published by the ministry on its official Facebook page, it identified the killed suspects. The first was Tarek Abdel Fattah, 52, along with his 26-year-old son Saad Abdel Fattah.

The two others were Mostafa Bakr, 60, and Salah Ali, 40. The ministry claimed the suspects were registered as highly dangerous criminals and are wanted in different cases.

The police said the men were driving a minibus as they neared a security checkpoint, opening fire on security forces.

“A fifth body, unidentified, was found in the minibus,” the ministry stated, in addition to an automatic rifle, a gun and a taser, and forged police cards carrying the badge of the Interior Ministry.

After that, the police reportedly raided the apartment of the first suspect’s sister, where they also found his wife. The ministry said the sister confessed to her brother’s crimes, and after searching the apartment, they found the belongings of Regeni, and others, which she also admitted were stolen by her brother.

According to them, the gang was responsible for the robbery of more than $20,000 and EGP 175,100 from nine Egyptians and foreign citizens, including an Italian citizen named David K. and a Portuguese citizen named Carlos M.

At the end of the statement, the ministry thanked the Italian investigative delegation working on Regeni’s case in Egypt for “its efforts and cooperation”.

Regeni, 28, was found dead in a ditch along the Cairo-Alexandria Desert Road on 3 February, nine days after his disappearance, amid allegations of possible security involvement due to his research related to Egypt’s labour and connections to workers’ unions and members of the Egyptian opposition.

In an interview with Italian daily La Repubblica in mid-March, President Abdel Fattah Al-Sisi addressed the family of the Italian PhD candidate “as a father before a president” who will “spare no effort” to find the perpetrators.

Italy widely denounced the killing of Regeni, demanding prompt and transparent investigations and the perpetuators to be held accountable. A delegation had arrived to Cairo to follow on the case closely, but their work seemed to have been limited to being informed of the latest updates by Egyptian counterparts.

The ministry’s findings have raised sarcasm among social media users who were suspicious of the ministry’s claims. Journalist Mohamed El-Garhy raised a few questions concerning the ministry’s statement, in which he wondered why the ‘wanted criminals’ have not been caught earlier, and how they ‘were freely wandering around with a dead body inside their car.’

Furthermore, the police said the crimes the gang – including the nine robberies – were registered at the police stations of Nasr City and New Cairo, “which are far from Dokki district, where Regeni was believed to have been last before his disappearance,” El-Garhy commented.

There have been no official comment from Italy so far, but the international community, especially the EU Parliament, said it was closely watching Egypt’s work on the case.

Regeni was interrogated before he was found dead: Reuters