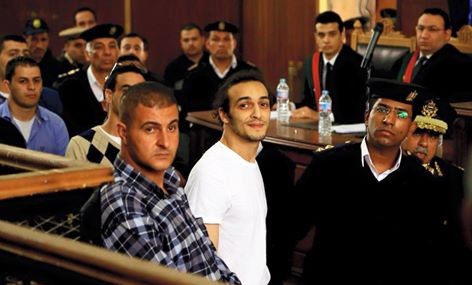 The Cairo Criminal Court held on Saturday the first trial session in the case publicly known as “Rabaa sit-in dispersal” in which photojournalist Mahmoud Abu Zaid “Shawkan” stands trial along with more than 700 other defendants.

The court adjourned the trial to 23 April to allow the defence lawyers to be able to obtain the case files and study them, and for the prosecution to submit the evidences of the charges issued against the defendants. Judge Hassan Farid, presiding over the case, rejected a request to release Shawkan from prison pending trial.

The Saturday session had been repeatedly postponed since 12 December as, according to the court, the court cage could not contain all the defendants at once.

The defendants in the case have been charged by the prosecution with murder of citizens and police forces, organising a militant demonstration and taking part in it, terrorising the Egyptian people gathering and possessing weapons and explosives among other charges.

Shawkan has been in detention since 14 August 2013, having been arrested while covering the violent dispersal of the Rabaa Al-Adaweya sit-in. He completed 900 days behind bars on 31 January.

“Shawkan has been punished for more than two years in remand. I am positive he has nothing to do with the violent incidents that took place that day. But it has already been two years, and still there is no progress,” Shawkan’s lawyer Taher Aboul Nasr told Daily News Egypt previously.

The maximum period set for pre-trial detention is two years, according to the Penal Code. However, Shawkan’s fate remained unknown for over a week following the end of the legal remand period, according to his defence lawyers.

It was not until mid-September that the court referral order was made public. It included Shawkan as the only photojournalist among 739 defendants.

Earlier this month, a letter from Shawkan, written from Tora Prison, was published by Amnesty International. In the letter, Shawkan detailed the conditions inside the prison, and the procedures governing inspections, decrying his continued detention.

Shawkan’s trial postponed to 17 May

In Video: #FreeShawkan An Indefinite Detention of a Photojournalist