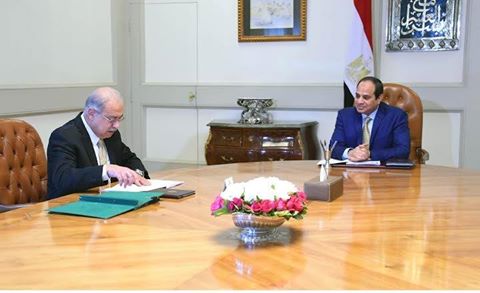 For the first time in two years, the cabinet, currently led by Prime Minister Sherif Ismail, will face a watchdog to be taken seriously. The constitution, adopted in January 2014, grants the elected House of Representatives unprecedented power over the executive authority.

Mehleb submitted his resignation following the exposure of a large-scale corruption case involving former agriculture minister Hany Salah El-Din. With the exception of a few other cabinet reshuffles—undertaken by Al-Sisi in response to public anger about the performance of some ministers and significant media campaigns—the government has not been under regular, organised monitoring.

Parliamentary tasks include forming a new government, or, in the current case where it was elected in the presence of a government, to approve or reject cabinet members.

Government under parliament’s watch, according to constitution

Such constitutional authorities will challenge the Egyptian presidency as it will have to adapt to constitutional changes, after having assumed both legislative and executive roles since the ouster of former president Mohamed Morsi in July 2013.

Established on 10 January 2016, the parliament is expected to receive the prime minister on 27 March. Ismail will present his cabinet’s programme to the parliament for its approval; the outcome of which is indicative of whether the government shall remain in place or be replaced.

Yet, the constitutionally independent parliament seems to be reducing its powers in the face of Al-Sisi’s authority. Parliamentary experts argued that Al-Sisi’s strong support of Ismail’s cabinet has already qualified the latter to obtain parliament’s approval.

Youssry Al-Azabawy, head of Al-Ahram Centre for Political and Strategic Studies’ (ACPSS) Parliamentary Forum Unit, is among those who believe the parliament seeks to be “aligned” with the president.

“The parliament is more inclined towards approving a Sisi-backed cabinet,” Al-Azabawy explained. He referred to a speech by the president, in which he explicitly advised the support of the government.

While speaking at Egypt’s Strategic Development 2030 conference on 24 February, Al-Sisi defended the government, arguing that he was the best judge of its performance. “Would you know them more than I do? I sit with them every day,” Al-Sisi said.

This comes as MPs also expressed their support for Al-Sisi, notably members of the influential pro-Sisi parliamentary coalition known as “Egypt’s Support”, which claims to have more than 200 supporters inside the parliament, in addition to its member and Parliamentary Speaker Ali Abdul Aal.

According to Al-Azabawy, there have been several critics of the coalition which is “viewed by many MPs as aiming towards a one-voice parliament”.

Al-Sisi is hoping to keep his cabinet in place by obtaining parliamentary approval of the programme it will present by the end of March.  However, the parliament has another motive for playing along, which is the risk of dissolution.

Most importantly, if the government of the current prime minister fails to win the confidence of the majority of MPs within 30 days, it shall be deemed dissolved, and the president shall call for new parliamentary elections, according to the same constitutional text.

“This is exactly where the problem is,” Al-Azabawy commented. “The elected parliament has not produced a party or coalition with a majority of seats; it seems unlikely that they would be able to fully agree on a cabinet nominee,” he stated.

Ramy Mohsen, researcher in parliamentary affairs and head of the National Centre for Research and Consulting (NCHR) also speculated that the parliament will most probably  “pass” on the government’s programme.

“It is too difficult for the parliament to provide an alternative cabinet at the moment,” Mohsen explained to Daily News Egypt.

In other words, the parliament might be compelled into accepting Ismail’s cabinet—as a whole—to avoid dissolution. However, the approval does not rule out the possibility of parliament later reshuffling some ministries.

Article 101 of the constitution defined the role of the parliament as “overseeing the actions of the executive power”. The parliament is therefore “entrusted with the authority to enact legislations and approve the general policy of the state, the general plan of economic and social development and the state budget”, according to the same article.

Both political experts confirmed to Daily News Egypt that the cabinet’s programme must be dissected by the parliament; each section should be assigned to a specialised parliamentary committee.

“There is no doubt that the details of the cabinet’s programme must be discussed among MPs with expertise,” said Al-Azabawy. “This is why the parliament must elect its specialised internal committees. It would allow a more stable environment for discussions and decisions.”

However, a new parliamentary regulatory chart, yet to be passed, included an article stating the parliament would be released from obligations of electing its committees prior to reviewing the government’s programme.

The proposed article allows the formation of a special temporary committee headed by one of the parliament’s deputies to look into the government’s programme. Temporary committees entail the distribution of MPs over different committees until a specific task is completed, to be reshuffled later.

“Once that committee dissects the programme, the parliament can then assign temporary committees to review it, like it did during the pressing revision of more than 300 decrees with the force of law within 15 days, as per the constitution,” Mohsen asserted.

Al-Azabawy pointed out the mechanisms to be adopted by the parliament in assessing the government. “I believe that political disparities or parliamentary disagreements will not obstruct the discussion of the programme,” he said.

To Al-Azabawy, the question to ask is how the parliament would find balance between Al-Sisi’s views, unsatisfactory government performance and media scrutiny, and the implementation of constitutional requirements to be translated into laws and legislations.

“For instance, MPs should examine the government’s proposal for Egypt’s current economic crisis. They should also see how social justice is to be achieved, since it was much stressed upon in the constitution, as well as the education, health and scientific research it carefully tackled” Al-Azabawy said.

In conclusion, he said he hoped for a parliamentary assessment of the government to be based on a detailed programme and expertise, to become the grounds for future government accountability.

Al-Sisi forces judge into retirement for engaging in political work