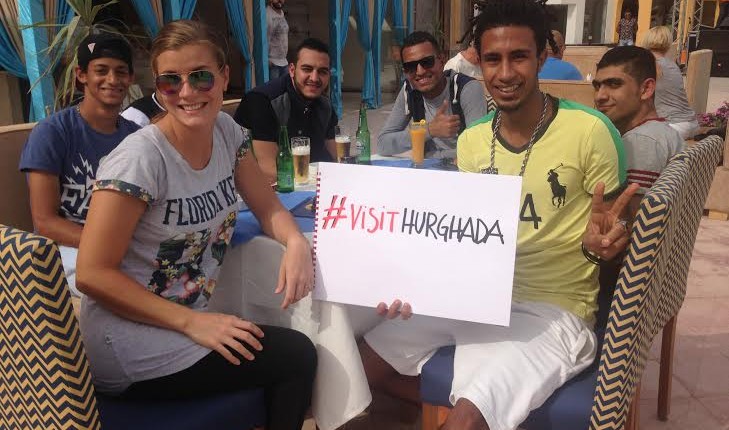 At a time when international media is pushing the image of Egypt as an unsafe country with danger lurking around every corner, especially following the death of Italian PhD student Giulio Regeni, a group of Egyptians and foreign residents are trying to show another side of Egypt that they believe is not presented in the news.

In an attempt to revive tourism and spread the beauty of Egypt that is rarely seen in global media, #SupportEgypt launched its first offline event on Saturday.

‎“Support Egypt” is a locally-based initiative created by a group of six residents who live in Hurghada ‎and Sharm El-Sheikh. Last November, the group took their campaign online by asking people to change their Facebook profile photos to one with a backdrop of the Egyptian flag to represent their stance against terrorism.

‎Following the Russian plane crash last October, the tourism sector is in severe decline with many places going out of business. The team decided to stand on their own to revive tourism, which is their main source of income, by organising a fun day in Hurghada. By inviting foreigners from all around the world for a day of fun, music, sports activities, and celebrations, people would be able to see that Egypt is not all doom and gloom.

“The event has two main goals,” said one of the founders, Barbara Castioni. “Firstly, it’s a day of celebration to unify the residents of Hurghada, who have been suffering for the past few months with having almost no tourists visiting us at all. So this is a way to unite us all together in order not to feel so alone.”

Secondly, Support Egypt will prove that tourists who come to Hurghada still have fun and are safe.  Castioni explained: “during the festival, tourists from all around the world can post their photos on social media. Their friends will see how much they’re having fun and we hope to change their perspectives.”

“Our mission is to change people’s perception and understanding of ‎Egypt and the Middle East and to show our peaceful nature,” she added.

The event began with a performance by the Hurghada Bikers on their colourful bikes. Hurghada runners postponed their weekly run from Friday into Saturday to go around the city to gather as many people as possible for the event. For entertainment, live singers and DJs performed as well as break dancers.

For several months, the team worked ahead of the festival’s date, 26 March, as “this is the beginning of the tourism season, tomorrow is Easter [on the Gregorian calendar], the day we consider the season officially begun”.

“Just one day before the festival, we welcomed 5,000 international tourists. We hope this is a good sign for rest of the season,” she added.

Even though many international hotels, famous restaurants and nightclubs participated in the event, the organisers were able to run the event without cost as “everyone who participated and attended did so on a voluntarily basis. They are all doing it for the sake of improving Egypt’s image”.

Approximately 500 people attended and donations went to Hurghada Gives ONG, an NGO which supports unprivileged people in Upper Egypt by providing them with clothes, food, and water.

“We aim to help all those who are in need. Just like we need support, others need our support to survive,” she concluded.   ‎