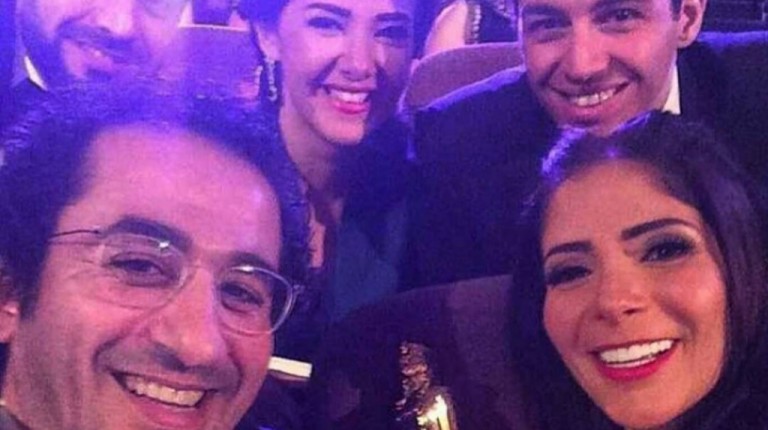 Less than a month after the Academy Awards ceremony, Dear Guest magazine in cooperation with C.A.T Company and 9090 Radio station held the first Arabian Cinema Awards (ACA) known as “The Arabic Oscars Festival”.

The ceremony began with a short speech by TV presenter Ahmed Amin who hosted the event. With his outstanding sense of humour and interaction with the attendees, he managed to grab the attention of the audience by poking fun at himself and some prominent actors, such as Baiomy Foad, Mohammed Farag, Tamer Hagrass, and others who starred in movies and TV series during the last year. He also tackled the issue of the actors’ salaries and how they resort to starting private businesses as future insurance.

The awards categories included best picture, director, actor and actress in leading and supporting roles, screenplay, costume design, visual effects, and others. In addition, some new categories were introduced to the award such as the award of the best hairstyling, makeup, and set design.

The prizes are awarded to outstanding filmmakers through a voting system by ACA members only and a membership which is limited to filmmakers in the Arab world, according to the official website of the award. Among the prominent winners were Asala for her song “Tasaheel” with the band Basata, Mona Zaki for her leading role in “Aswar Al-Qamar”, Amina Khalel for her supporting role in “Sokkar Mor”, Tarek Al-Arian as best director for his movie “Awlad Rezk”, Ahmed El-Fishawy for his supporting role in “Awlad Rezk” and Hisham Nazeh for best music in “Aswar Al Qamar”. All the prizes were hosted by well-known actors, producers, and directors.

The ceremony also awarded the prize of best actor in a leading role to the late Noor El-Sherif for his exquisite role in “Btawqeet Al Qahera” in which he played the role of an old man who suffers from Alzheimer’s disease. The achievement award was given to superstar Yousra as praise for her successful career.

Although the ceremony was attended by relatively few Egyptian filmmakers, it is still considered a promising step towards supporting the cinema industry in Egypt and the Arab region. The following rounds will honour Arab and international filmmakers as well as some awards for the best documentaries.