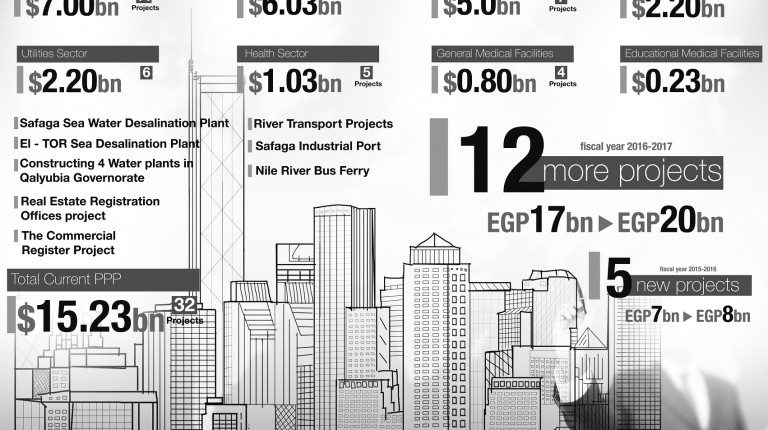 Appropriating US President Barack Obama’s 2008 presidential campaign slogan, the Egyptian government with its new cabinet launched a new programme to bring about economic change. The cabinet, which recently witnessed a 10-minister reshuffle, revised its previous economic goals to more realistic ones.

Addressing the House of Representatives on Sunday, Prime Minister Sherif Ismail announced the 2030 economic and social strategic plan for the country. Highlighting the short term goals, Ismail focused on fiscal years (FY) 2017/2018. The prime minister said the government is aiming for a growth in the gross domestic product (GDP) of 5%-6%.

Ismail also discussed unemployment, a socio-economic problem that has been addressed by different cabinets at different ages with ranging goals, and which currently stands at 12.7% of the population.

This is the second cabinet reshuffle under Ismail.

Following the new ministers’ swearing in, the cabinet announced that President Abdel Fattah Al-Sisi instructed the new ministers to work on lowering the budget deficit and enhancing taxes and customs revenues to bolster treasury revenues.

“Public debt, as of now, stands at roughly 98.3% [of GDP] if we factor in the latest increase in USD exchange rates when calculating external debt, and driving it down should be a priority, but from what we see in terms of the government failing to widen and deepen its revenue pool while continuously increasing expenditure especially on non-remunerative projects, I do not think the government will be able to attain that goal,” the ECESR official said.

Ismail addressed the FY 2019/2020 goals, stating that GDP growth is expected to exceed 6% while unemployment will be lowered to less than 9%. The budget deficit is predicted to register 8%-9% of GDP by the end of FY 2019/2020 while the public debt would reach 85%-90% of GDP by the same year, an official statement issued by the cabinet read.

Once more: A new economic team

The new plan came after a speedy reshuffle in the cabinet’s economic team. Former minister of investment Ashraf Salman and former minister of finance Hany Kadry Dimian were axed and replaced with Dalia Khorshid and Amr El-Garhy, respectively.

The former ministers leave behind the fate of the implemented projects and investments of the Egypt Economic Conference for Development (EEDC), which was held in March 2015, and the unannounced rate and implementation date of the value-added tax.

Ghannam said that Dimian was “perceived as instrumental in the World Bank loan negotiations and was attested by many as knowing the nooks and crannies of the ministry because of his history serving there”.

“However [Dimian] utterly failed to manage the deficit and raise revenue, and as of now, I have no reason to believe that the new minister will be able to do any better,” he added, stressing that the public still needs to wait and see what will happen.

Former minister of tourism Hisham Zazzou was not spared after heavy criticism following the International Tourismus-Börse (ITB) Berlin, one of the world’s largest tourism conventions, held between 8 and 12 March.

Zazzou’s efforts to promote tourism were described as “insulting to the country” and “outdated” by social media users and some tourist companies’ representatives who attended the conference. Zazzou was replaced with Mohamed Yehia Rashed.

Rashed’s responsibility lies in attracting tourists who abandoned Egypt after several of militant attacks as well as a recent Russian plane crash. In 2015, the country ranked 10th among Middle East countries and came in 83rd place globally in the ranking for the top tourism-ready economies.

Despite also receiving wide criticism, Minister of Health Ahmed Emad El-Din was excluded from the reshuffle as well as Minister of Education El-Helaly El-Sherbiny.

Some Egyptians criticised the choice of new ministers, arguing that their backgrounds come mainly from the private sector.

“Egyptians used to have an issue with how many ministers were appointed from the private sector during the time’s of Nazif [Egypt’s prime minister from 2004 until 2011],” said Alia El-Mahdy, a professor of economics at the Faculty of Political Science and Economics at Cairo University. “Now, there are more ministers coming from the private sectors than there were during Nazif’s era.”

Ghannam said that the reliance on ministers from a private business background has been a “problem” facing the country for a long time.

“It proved to be very problematic to say the least, and outright catastrophic sometimes,” the ECESR researcher said. “The country is not a company and the populace are not employees, and I believe we already exhausted all the tired metaphors about the marriage of capital and political power.”

“Having a minister with a private business background is not a bad thing,” El-Mahdy highlighting that the problem is not in having ministers with that background but in appointing ministers who will be operating in fields that are not their “specialty”.

El-Mahdy added that “this is not the best selection [for ministers]”, but stressed that the new economic team should be given a chance to prove itself.

Ministry does away with previous FY 2015/2016 budget goals

Another significant goal was for international foreign reserves to reach $19.6bn by the end of May 2015.

Al-Sisi and his team: past promises

On 20 May 2014, then presidential candidate Al-Sisi released his much anticipated economic platform.

Al-Sisi promised that when elected, GDP growth will be around 7% by FY 2017/2018 while the budget deficit would plummet to 8.5% by the same fiscal year.

Al-Sisi’s platform also aimed to decrease unemployment to 8% by FY 2017/2018. The platform promised unprecedented development in the tourism sector, targeting 30 million tourists annually through the development of 26 cities and integrated tourist centres across 21 governorates.

Al-Sisi’s platform also included the reclamation of 4m acres of lands, adding that the “availability of good soil and the access to water both allow this”.

The government’s goals for economic achievements, much like its ministers, have continued to change throughout the past two fiscal years. Ghannam said that government is committed to its plans but he doubts how effective those plans are.

The economist highlighted that the way the government has dealt with the economic crisis it faces is “much like a procrastinating student to an impending exam; what remedial actions it takes usually come extremely late and mostly incomplete, and both of them will probably get a C- at best”.

GlaxoSmithKline pumps EGP 400m into Egypt until 2017: Minister of Investment