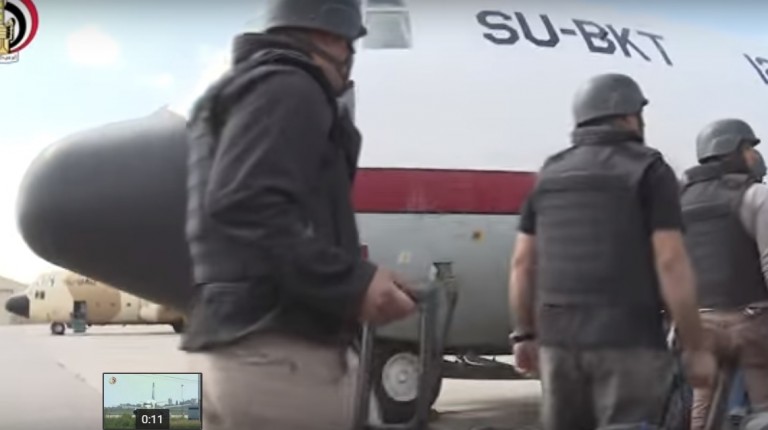 The Egyptian Defence Ministry announced in a video Tuesday that squads from the Egyptian Special Forces returned to Egypt hours after the release of the passengers of the EgyptAir flight that was hijacked and rerouted to Cyprus.

The video showed a military airbus landing in Cyprus and members from the Special Forces gearing up. It added that that the military delegation also included negotiators who were set to work with Cypriot officials to free the hostages in the hijacked plane.

The hijacked plane was originally scheduled to fly from Borg Al-Arab airport near Alexandria to Cairo, before being forced to reroute to Larnaca, Cyprus after a passenger hijacked the plane, claiming he was wearing an explosive belt.

The video showed individuals belonging to the anti-terror squad in the Egyptian Special Forces, with their faces blurred out. “The troops were sent by orders from President and Supreme Commander of the Armed Forces Abdel Fattah Al-Sisi,” the video said, adding that the forces were ready to act if the situation required it.

Cypriot foreign minister Kasoulides highlighted that there was continuous communication with the Egyptian authorities who made efforts to contribute to resolve the situation. Kasoulides, however, said these efforts were not necessary.

He added that two teams arrived in Cyprus from Egypt, including a team of expert negotiators who speak the hijacker’s language. Fortunately, they did not have to intervene, Kasoulides said.

The hijacker was identified as Seif Eddin Mostafa, 59. Hours into the standoff, two photos depicting Mostafa on the plane were circulated online. One photo shows him standing in the aisle, while the other showed him wearing what looked like an explosive belt around his waist.

At the time, it was believed that a government official was on board hoping to assist with negotiations. The Egyptian forces disembarked and approached the aircraft containing the hostage crisis and surrounded it with armed men, aggravating the Cypriots who were in the midst of negotiating with the two gunmen on board.

As the antiterrorism unit continued to defy Cypriot orders and encircle the plane, firing shots at the cockpit, clashes erupted between Egyptian and Cypriot forces on the ground, resulting in casualties on the Egyptian side.

UPDATE: Passengers freed from hijacked EgyptAir plane except for four foreigners and crew