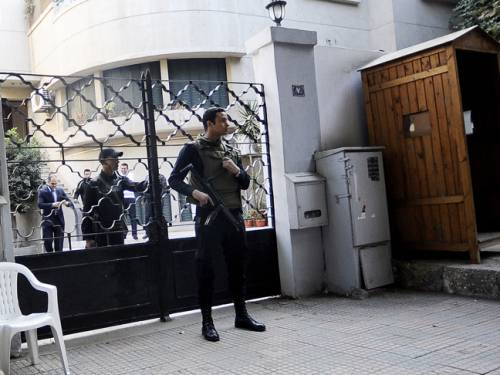 Maat also announced on Wednesday that the Ministry of Social Solidarity has prohibited it from receiving funds from the Anna Lindh Foundation.

Okail said the foundation’s lawyer had received confirmation that the NGO was involved in the foreign funding case levelled against a number of local NGOs, which was recently reopened after years of closure.

He noted, however, that no one from the organisation was summoned for investigations as of yet, saying that he is not concerned, as the foundation is registered under the Ministry of Social Solidarity and has not been involved in any illegal activity, whether receiving funds or otherwise.

Okeil further commented on the ministry prohibiting funds from reaching Maat, saying: “I submitted in January a request to the Social Solidarity Ministry administration in Dar Al-Salam for approval for a fund from the international NGO, the Anna Lindh Foundation, which operates from an office in Alexandria.”

The request was sent on 14 January, and was not answered, despite the legal duration of keeping requests in directorate being set at 60 days. Okeil has sent several complaints to the ministry, but has received no response.

He added that Maat regularly faces such intransigence on the ministry’s part, noting that the foundation has been denied funds on numerous occasions. The ministry moreover previously delayed a project for Maat by 12 months without clear justification, he noted.

Further, on Tuesday, the National Council for Human Rights (NCHR) said it is following up on investigations into the foreign funding case, and decided to delegate three of its members to attend the investigation session, which was postponed to 5 April.

Several calls were made by rights groups and activists to the NCHR to interfere and stand against the reopening of the case, which dates back to 2011, and to follow up and attend the case investigations.

The NHCR delegated three lawyers, including Ragia Omran, Ahmed Naser, and Gamal Barakat, to follow-up on the case.

Barakat told Daily News Egypt: “We have yet to receive or review any of the case’s legal documents so far, even the report including the organisations’ names. We will be able to review the documents in the first investigation session, which we will attend next Tuesday.”

The council said it will proceed in light of its mandate to pursue the case and its developments and will attend the next hearings. The NCHR will work on the case in accordance with the role assigned to it in support of civil society organisations, according to its statement.

Solidarity and condemnations continued in support of the accused NGOs in the case, pressuring the state to end the crackdown on civil society organisation and their members.

Fifty-two public figures, including people from various professions, released Tuesday an open letter directed to President Abdel Fattah Al-Sisi regarding the reopened 2011 case,  demanding the enforcement of constitution and calling on him to stop the crackdown on NGOs.

A number of NGOs have most recently been targeted in the case, including Nazra for Feminist Studies and staff members from the Andalus Institute for Tolerance and Anti-violence Studies, for allegedly receiving funds from the European Union and the United States.

NGOs in Egypt have faced numerous restriction and obstacles hindering their work. In addition to the recently reopened case, NGOs workers often face harassment, and their members have faced arrest on other charges.

Mahmoud Farouk the head of Egyptian Centre for Public Policy Studies (ECPPS) previously told Daily News Egypt: “Since 2011, numerous NGOs have been closed, including 60 local and a number of international ones. A small percentage is present currently, and these suffer from ongoing violations and restrictions.”

He also contended that while the Ministry of Social Solidarity is officially responsible for NGOs’ issues, it is in fact the National Security Apparatus that is monitoring and controlling the registration of NGOs and their activities in the country.