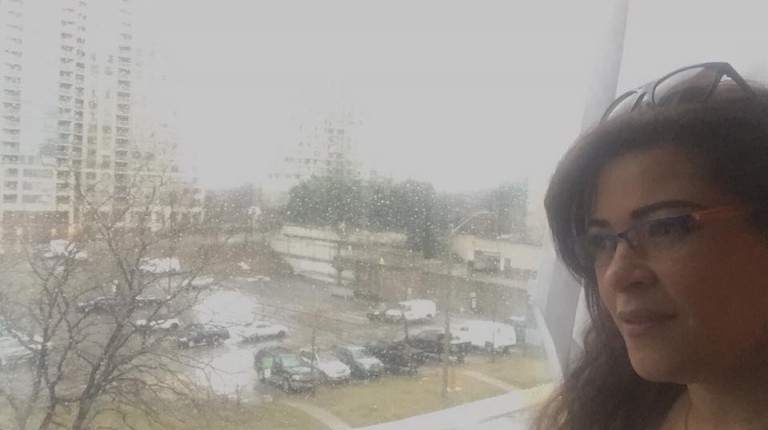 The court on Thursday dropped an appeal filed by the defense of writer Fatima Naoot, which aimed to revoke a prison verdict issued against her.

Naoot published a statement on her official Facebook account Thursday explaining that she was scheduled to participate in an international conference, during which she shall be honoured, at the time of the court session. “My trip coincided with the court session, and I had to leave for Toronto,” wrote Naoot.

According to her defence lawyer Sherif Adeeb, neither Naoot nor himself showed up at court, resulting in the cancellation of the appeal they had filed. “We will file another appeal and wait for the court to schedule a new session,” Adeeb explained to Daily News Egypt on Thursday.

He further confirmed that the writer was not facing the risk of being arrested at the airport upon her return to Egypt. “We have bailed her out by paying a certain amount of money, and thus she is free to travel whenever she pleases,” Adeeb stated.

Naoot appealed a court verdict sentencing her to three years in prison over charges of religious contempt. Adeeb clarified that she paid EGP 20,000 to be released on bail.

Naoot faced trial after expressing personal views regarding the slaughter rituals during the Muslim holiday of Eid El-Adha. In an October 2014 post on her social media page, Naoot criticised “animal slaughter” in reference to the religious tradition of sacrificing sheep, and wrote “Happy massacre, everybody”.

In January 2016 she was sentenced to three years in prison after being convicted according to Article 98 of the Penal Code on religious contempt, which states: “Whomever exploits religion in order to promote extremist ideologies by word of mouth, in writing or in any other manner, with a view to stirring up sedition, disparaging, or contempt of any divine religion or its adherents, or prejudicing national unity, shall be punished with imprisonment between six months and five years, or the payment of a fine of at least EGP 500.”

Naoot tried to remain positive throughout the trial process, repeatedly stating on her personal Facebook account that she was not “demoralised”. Meanwhile, the law of religious contempt has also been widely criticised by writers, journalists and defenders of freedom of expression, and is among the topics featured in Naoot’s discussion panels during her conference in Canada.