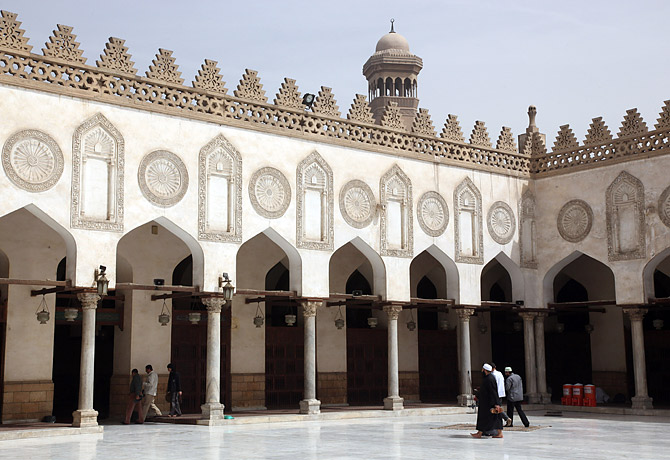 As a part of his two-day visit to Egypt, German interior minister Thomas de Maizière delivered a speech to students from Al-Azhar University that focused on religious tolerance, according to an official statement from Al-Azhar.

Grand Imam of Al-Azhar Ahmed Al-Tayeb noted that the Sunni institution is ready to contribute to establishing and supervising a foundation to teach Arabic to German citizens. He added that Al-Azhar is ready to provide training to German Imams.

Al-Tayeb’s suggestions were met with welcome from the German interior minister, according to the statement.

De Maizière said the German state made recommendations to the German Islamic Council in 2010 to establish sections to teach Islamic doctrine, noting that 2,000 students are now enrolled in that section.

Regarding Muslims’ living conditions in Germany, De Maizière clarified that Muslims are an inseparable part of the German people, highlighting that the Muslim population in Germany is 4 million.

He further affirmed the importance of freedom of religions and belief in Germany, explaining that the state does not monitor people’s religions.

He moreover noted that while some countries are facing threats from extremist tendencies, violent crimes cannot be justified through the freedom of belief.

“I asked to meet with [the grand imam of] Al-Azhar to begin cooperation between Germany and Egypt to reach an interpretation affirming that Islam calls for peace and not violence,” he added, asserting that they reached a cooperation agreement on several projects related to the matter.