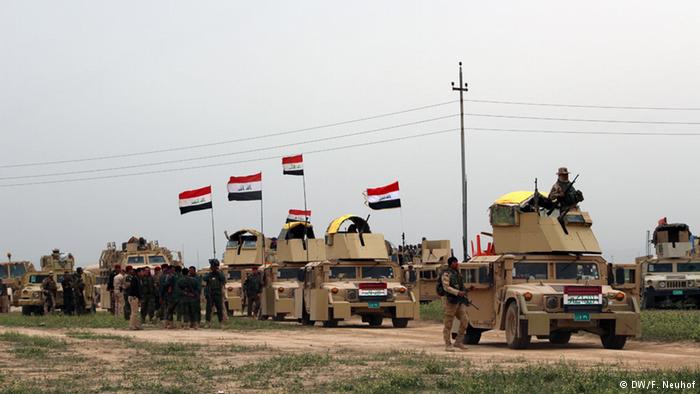 A glance through the binoculars reveals more than a dozen heavily armored Humvees idling in front of the village of Nasr near the northern Iraqi town of Makmour.

The US-supplied vehicles are only two kilometers from the earthen fortifications from which they advanced over a week ago. They belong to the Iraqi army’s 15th Division, which was tasked with taking a string of villages up to the town of Qayara, which is to become a staging post for the assault on IS-held Mosul.

But the advance was quickly struck down by paralysis. In spite of numerous coalition air strikes and US artillery support, only three villages have been taken so far, two of them after the “Islamic State” fighters decided to retreat without a fight.

Loudly heralded as the first phase in the liberation of Mosul, which has been under IS control since the army collapsed under the terrorist onslaught in June 2014, the offensive at Makmour is fast becoming another embarrassment for Iraq’s armed forces. It also raises the question whether the rebuilt army is capable of retaking Mosul.

“We hope that the Iraqi army succeeds, because this operation is very important for everyone. This is the first step in the offensive to liberate Mosul. If they fail here, the liberation of Mosul will be very difficult,” Najat Ali, the sector commander for the Kurdish peshmerga forces at Makmour, told DW.

The strategic importance of taking Qayara is not confined to its proximity to Mosul. It would also sever the link between Iraq’s second largest city and the town of Hawija in the east, surrounding the IS fighters who menace the Kurdish frontlines near the city of Kirkuk.

Uneasy alliance between peshmerga and army

After some setbacks, the peshmerga managed to repel the IS assault on the autonomous Kurdish region two years ago, and have since held a 1,000-kilometer-long front that straddles Makmour, a town about 75 kilometers (47 miles) from Mosul. The Kurds allowed the Iraqi army to mass here, but view their allies in the fight against IS with mistrust and scorn.

“If the peshmerga had half the equipment that the Iraqi army was given, we would have liberated most of the villages on the way to Qayara by now,” said peshmerga Colonel Waya Aziz, who commands a unit facing Nasr.

Iraqi Security Forces have fared slightly better in other theaters of operation. They finally retook the city of Ramadi in December of last year after an eight month-long siege and are making progress at the town of Hit in Anbar province.

But the Iraqis have relied heavily on their elite counter-terrorism units, which are limited in number and always on the brink of exhaustion as they are rushed from one fight to another.

Powerful Shiite militia groups known as the Hashd al Shabi took over as the main fighting force after the army’s collapse in 2014, but they are not trusted to enter the Sunni city of Mosul after being accused of a string of sectarian human-rights abuses. The peshmerga have little appetite for advancing into Arab-populated areas.

If IS is to be defeated at Mosul, the army has to pull its weight, and at Makmour it has shown few signs of mastering even basic military skills. The units sent out to capture Nasr attempted to take the village for three days after the offensive was launched on March 24 before breaking off the attack.

During that time, the assault was largely restricted to convoys of armored cars shuttling between the Kurdish lines and the outskirts of Nasr, from where they unleashed wild bursts of machine-gun fire. Badly aimed mortar shells burst randomly among the buildings, sometimes hitting the ground near the Humvees. On March 25, IS briefly abandoned Nasr, but the Iraqis failed to take the village and stop them from returning half an hour later, according to soldiers involved in the fighting.

Many of the inhabitants of the three villages that were taken fled towards the Kurdish lines, and by March 30 around 1,900 villagers had made the dangerous journey to Makmour, where they are sheltered in an overcrowded community center on the edge of the town.

Before reaching safety, their villages were bombed from the air and mortared by the advancing army. Several villagers say that the soldiers began firing at them indiscriminately.

“In the first days they were great, but on the third day they started shelling everyone. They made no difference between civilians and Daesh,” said Mohammed Ali Mohammed, a 38-year old who escaped the village of Kharbadan with 30 other family members, using the Arabic acronym for IS.

Most of people living in Kharbadan, the only village taken in combat so far, were prevented from crossing the lines by IS, which herded them to the rear, according to Ibrahim, a 23-year-old student from the nearby village of Kudila, which was also taken by the army. Situated right on the front line, Kudila was abandoned some time ago by its inhabitants, many of whom resettled in Kharbadan.

“My house is totally destroyed. But IS fighters died in it, and that’s how it should be,” said Ibrahim, who did not want to give his full name out of fear of IS. The terrorists beat him after his brother escaped across the front line two months earlier, he says.

Life under IS control had become increasingly tough, the villagers say. Food, electricity and fuel had become scarce after air strikes struck at oil installations and a key supply route to IS-held Syria was cut. The terrorists enforced their hard-line interpretation of Islam, forcing women to cover up and men to grow beards, and brutally punishing any transgressions.

The men, women and children who have made it to Makmour have come with little more than the clothes on their bodies, and hardship is etched on their faces. During meal times, the women sit stoically in long rows on the rubbery surface of a fenced in football pitch, patiently waiting for food to arrive, ladled out to them and their children from plastic buckets by aid workers. The men eat separately on the other pitch behind the Makmour community center building, which is now littered with mattresses, hastily packed possessions and empty water bottles.

The villagers are relieved that their ordeal is over, but they have now become part of the ever-growing displaced population in Iraq. Already, 3.3 million people have been displaced by the war. The UN estimates that more than a million more people could be forced to flee their homes during the battle for Mosul.

Iraqi army tightens its control over Fallujah except for ‘some pockets’: Iraqi PM