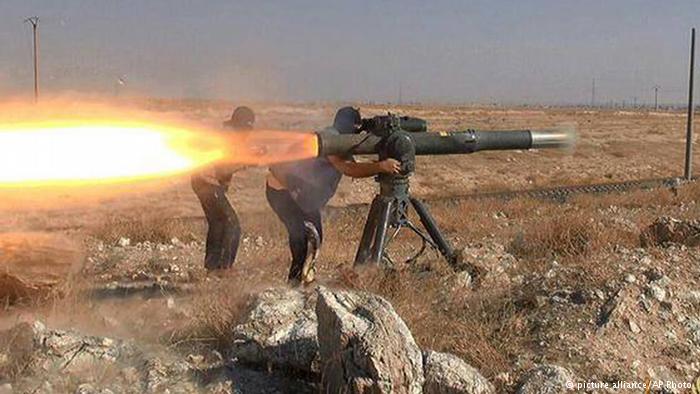 Russia has accused Turkey of using three humanitarian organizations to funnel weapons and supplies to IS and other jihadist groups in Syria. Moscow also called for Turkey close the porous border to extremists.
Russia’s UN Ambassador Vitaly Churkin on Friday sent a letter to the UN Security Council saying three Turkish humanitarian organizations were fronts for the country’s intelligence service to send weapons and supplies to extremists in Syria.

“The main supplier of weapons and military equipment to ISIL fighters is Turkey, which is doing so through non-governmental organizations,” Churkin said in a letter dated March 18, referring to the self-declared “Islamic State” (IS) group by another acronym, ISIL.

Churkin accused the Besar Foundation, the Iyilikder Foundation and the Foundation for Human Rights and Freedoms (IHH) of shipping “various supplies” on behalf of Turkey’s MIT intelligence agency.

It is not the first time Russia has accused Turkey of backing extremist groups in Syria, where Moscow is backing the regime against rebels and the IS group. Russia and the Syrian government consider all rebels fighting against the regime to be terrorists.

Turkey, Qatar and Saudi Arabia have been the main backers of rebels, several of them hard-line Islamist groups, seeking to overthrow Syrian President Bashar al-Assad.

Turkey denies supplying extremist groups but has often been accused of having turned a blind-eye, if not actively supporting fighters crossing the border, as well as providing supplies and weapons to various groups.

Some Turkish-backed groups such as the jihadist Ahrar al-Sham have ties to al-Qaeda’s Syrian affiliate, the al-Nusra Front.

As the conflict in Syria has progressed, fighters from some rebels groups have broken off to join with more radical jihadists, including al-Nusra and IS. Adding to the complexity, the Syrian Kurds have accused Turkey of backing extremist groups to thwart their efforts in self-governance and military advances.

Separately on Friday, US Secretary of State John Kerry and Russian Foreign Minister Sergei Lavrov spoke on the phone about strengthening a ceasefire in Syria and expanding humanitarian operations.

The ceasefire, which does not include al-Nusra and IS, has largely held for several weeks as UN-backed peace negotiations between regime representatives and the opposition continue in Geneva. But the UN said this week that humanitarian supplies were only able to reach 30 percent of those in desperate need.

In the talks, Lavrov called on Turkey to seal the Turkish-Syrian border which he said was “actively used” to send Islamist fighters to Syria via Turkey.

Russia and Syria have voiced concerns that the lull in fighting could be used by rebel backers to bolster various rebel factions with weapons, supplies and fighters.

Russia’s renewed accusations come as two prominent Turkish journalists are on trial for treason over a 2015 story they published with pictures of trucks alleged to have belonged to Turkey’s MIT intelligence agency carrying weapons to Syria.

At the time, in January 2014, the trucks were stopped by gendarmerie. The government first said the shipments were a national secret, then said they were carrying food and medicine.