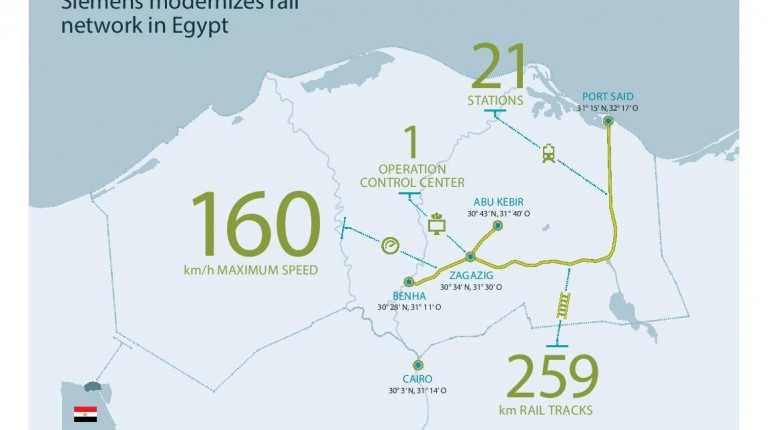 Siemens has been awarded a contract by the Egyptian National Railways (ENR) to upgrade 260km of railway networks in Egypt with advanced technology for signalling, level-crossings, and communications.

In a press statement on Monday, Siemens said the modernisation process is part of a national plan to upgrade Egypt’s rail system, which aims to increase safety levels; raise the railway’s maximum speed to 160km/h stead of 140km/h; and boost the throughput of train and freight services.

According to the contract, the routes between Benha and Port Said to the northeast and Zagazig and Abu Kebir in northern Cairo will have their mechanical interlocking systems replaced with modern ones from Siemens. The new system can be controlled electronically from a central point.

A communications infrastructure will also be implemented along the routes, which includes approximately 20 stations, the statement read.

The contract will also include equipping the operations control centre located in Zagazig. These routes are expected to be operational by 2020.

A strong transport network is essential for accommodating rapid population and industrial growth, he said.

The project is funded by the Arab Fund for Economic and Social Development with KWD 44m, in addition to funding from the Kuwait Fund for Arab Economic Development at KWD 30m.

Over the course of the 48-month contract period, 21 signalling towers will be established and developed with a central electronic system instead of mechanical interlocking systems. Additionally, 98 level-crossings will be developed.

Siemens to invest €1bn in new startup unit over 5 years