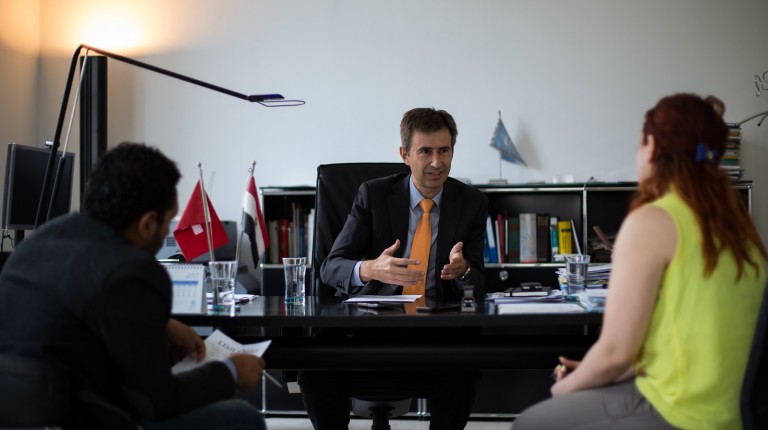 Swiss ambassador to Egypt Markus Leitner spoke with Daily News Egypt about the development of economic cooperation between both countries. Leitner also revealed his recommendations on how the Egyptian economy could grow and discussed the protracted issue of the Mubarak family’s assets remaining in Swiss bank accounts.

What is your opinion of the current investment climate in the Egyptian market?

The Egyptian market is an essential market due to its strategic location. It is a hub to serve Africa as well as the Arab zone, while also offering a large domestic market. In the past five years, many Swiss companies have continued investment in the Egyptian market.

In the wake of the unstable legal and security situation, many foreign investors are reluctant to invest in Egypt, especially those who target long-term investments. What is your opinion?

International investors focus primarily on their business cases. From that point of view, uncertainty around the rule of law definitely affects long-term investment. As for the security situation, Swiss investors seem to have a fair understanding of the challenges. Many of them are doing business in far more complex security environments. Therefore, I see other factors as being more decisive than security when it comes to investment.

What are these other facts?

When I speak to Swiss companies, they usually raise issues such as access to foreign exchange, compliance with bureaucracy, and availability of well-qualified workers.

Can you tell us more about the bureaucracy facing foreign investors in Egypt?

When I say bureaucracy, I am not only talking about lengthy authorisation procedures, for example, but also about the rule of law and the corruption risk. Certain new laws and regulations are introduced without prior consultations with concerned investors or importers. Due to their long-term commitment in the country, investors are sensitive to surprising changes in the framework of conditions.

As you mentioned, one of the problems facing the Egyptian market is the lack of foreign currency. What is your view of the dollar crisis?

After the currency devaluation, I see that there is more importance given to market forces to determine the exchange rate. The Central Bank of Egypt (CBE) has taken a bold step, even though Egypt has witnessed bigger devaluations in the past. From an investor’s point of view, the step is welcome because it eliminates a great deal of uncertainty. I hope this step helps to increase the availability of foreign exchange in the market and limits the need for administrative measures to curtail imports.

This devaluation has impacted inflation. What is your opinion?

I understand that many people are very concerned about the devaluation’s impact on price increases. At the same time, I feel that many importers have priced in a possible devaluation for some time. There is a good chance that inflation will not increase as much as many currently fear.

Are you satisfied with the efforts made by the Egyptian government to attract more investments?

I can see that the Egyptian government is keen to attract more investment. The projects launched by the government in this regard, particularly the Suez Canal Development Project, have presented a very attractive area for Swiss companies.

But still, certain measures must be taken to attract foreign investors.

Can you tell us more about these measures that could attract foreign investors?

In general, domestic companies are leading investments and foreign ones are following them. So, by paying attention to local companies, as well as to existing foreign investors in the country and small- and medium-sized enterprises (SME), the Egyptian government is already stimulating foreign investment.

In Switzerland, more than 95% of companies are small- and medium-sized. These sized companies are creative, can adapt to new market conditions easily, and create new work opportunities. They are the leading factors behind economic growth.

The Egyptian government has made many efficient reforms in the economic sector, but these reforms cannot stay simply written on paper. In order for these reforms to be activated in reality, the government should fight bureaucracy.

What about the new restrictions on imports?

Import regulations are an important indicator for foreign investors about framework conditions in a country. Before you start to invest, you will want to know the market. Business relations usually develop step-by-step: you start by exporting to a market, then you set up an office and you start to produce locally for the domestic and regional market.

If a foreign investor is not investing in Egypt, he needs to know the market’s atmosphere’s first.

So, the recent import regulations are sending conflicting signals to potential foreign investors about the openness of the Egyptian market.

Switzerland enjoys a very competitive economy because domestic companies had to compete with foreign producers early on. As an export-oriented country, we depend on highly innovative companies and their access to international markets. I feel that making Egyptian companies more competitive provides more medium-term benefits than protecting companies that are suffering from efficiency deficits. Where Egypt protects its markets, regulations in this regard should be predictable.

Do Swiss companies intend to invest in the Suez Canal Development Project?

This year we will inaugurate the longest railway tunnel in the world through the Alps. I could say that this is the Swiss Suez Canal.

How do you qualify the mechanism for economic growth applied by the Egyptian government?

There is much talk about tax incentives. However, for most companies, these are just the cherry on top of the cake. General framework conditions, such as labour market, energy supply, or efficient government, are much more important.

Egypt has developed from a “cheap labour, cheap energy” investment destination. Today, quality and availability of labour as well as reliability of energy are important elements for investors.

Anyway, you can see a real will from the Egyptian government to attract foreign investments and the message delivered by it is clear: “We are very welcoming to foreign investors.” The only thing left, is how.

Which sectors are attractive to Swiss companies?

As a growing market for 90 million consumers, consumer products, in the food sector especially, are definitely attractive. I also see potential in the mining and textile sectors. In the services sector, logistics services will become more attractive.

What is the role of the Swiss embassy in encouraging the presence of more Swiss companies in the Egyptian market?

The embassy is a door opener for interested Swiss companies. We provide them with the necessary contacts and information, advise them on risks and opportunities in the Egyptian market, and support them in their interactions with the government. We also cooperate closely with the Swiss-Egyptian Business Association (SEBA), in which almost all Swiss companies are members. For example, the Swiss embassy is facilitating a SEBA-organised Egyptian trade mission in the textile sector to Switzerland next May.

Finally, the embassy is arranging visits of Swiss delegations on certain subjects. For example we visited the Suez Canal with a delegation, to introduce ideas about the Suez Canal Development Project to Swiss investors.

What about the size of exports and imports between both countries?

How could we increase Egyptian exports to Switzerland?

We noticed that Egypt’s exports to Switzerland are comprised of a number of agricultural goods with very limited added value, for example potatoes. Therefore, we are actively supporting the idea to add more value to Egyptian products that arrive in the Swiss market. I am confident that Egyptian producers can profit more from the free trade agreement that exists between our two countries.

Are there any intentions from the Swiss side to finance Egypt’s infrastructure in the upcoming period?

We have a series of infrastructure projects ongoing here in Egypt in the area of water, such as providing fresh drinking water, sanitation, and more efficient water usage, particularly in the Aswan region. Other examples are our projects in the waste sector to treat solid and medical waste. We have a pipeline of new infrastructure projects that we are currently looking at and that we are discussing with the Egyptian government.

What was the size of Swiss investments in Egypt during 2015?

Egypt is the second biggest investment destination for Switzerland in Africa. Only in South Africa, have Swiss companies invested more in comparison to Egypt. By the end of 2014 it reached around CHF 1.4bn.

We have seen that the Swiss companies have continued to invest in Egypt over the past five years. We have also seen the important investment plans that Swiss food companies such as Nestlé and Hero have announced for the upcoming period. For that reason, I am expecting a solid investment performance during 2016.

Switzerland has signed deals with the Ministry of Communications to recycle electronic waste. Are there any plans from your side to lead the economic sector in Egypt?

Regarding electronic productions, we are not Japan or Korea. However, if we look at electronic waste, Switzerland has always been a leader and we see good opportunities here in Egypt.

In Switzerland we recycle more than 90% of our electronic waste. Recycling electronic waste nowadays is an attractive business where precious materials are extracted and re-used in the industry. At the same time, with the right framework conditions in place and implemented, this business protects the environment and creates many job opportunities.

We have had excellent experiences with Swiss projects in countries such as India, South Africa, and Ghana.

We can see that the Egyptian Ministry of Communications has included e-waste in their green ICT strategy, which is a very positive step for small- and medium-sized companies. The idea is to develop a suitable framework and to develop a safe industry in this regard.

Egypt is not particularly experienced in extracting precious substances from electronic waste. How could Swiss companies help?

We are not focusing on high-end technology in the context of electronic waste. Instead, we are focusing on safe practices and a proven methodology. Again, we supported countries in similar situations such as India and South Africa. Finally, the project is about finding solutions to the needs that we come across in Egypt.

After the 2011 revolution, a huge amount of money belonging to Mubarak and his family was detected in Swiss banks. How much was found?

The group, which consisted of about 20 people, had $600m between them. It was blocked minutes after Mubarak stepped down and is still blocked, five years on.

How could this money be recovered?

These assets must be linked to a crime in Egypt. Switzerland is keen to move on from this issue. The Swiss prosecutor-general was here in January, for the second time which proves that we are keen to resolve this issue.