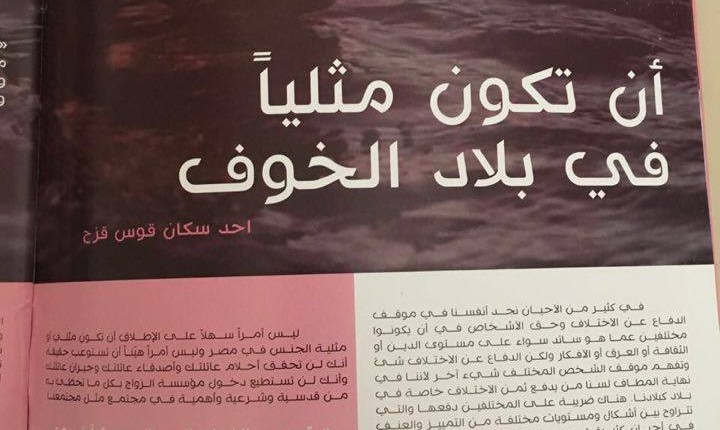 The AUC Times magazine, a publication of the American University in Cairo, denounced the reactions of a member of parliament towards its latest issue in March.

MP Hussein Gheita, representative of Al-Wafd party, proposed an urgent statement Wednesday to the parliament speaker against the ministers of foreign affairs and higher education on an article published by the student-run magazine.

The article, which followed the daily life of a homosexual in Egypt, was slammed by Gheita as inciting “debauchery” and “destroying societal morals”.

Omnia Farrag, Arabic section editor at the AUC Times, told Daily News Egypt Thursday that it is “ridiculous” that Gheita would criticise an article that merely reflects the fears of homosexuals. “The article did not encourage homosexuality; it simply shed light on the experience of homosexuals,” she said.

According to Farrag, discrimination has been an area of focus in the AUC Times’ monthly issues, and the latest issue focused mainly on the sexual discrimination. “We never seek bias. Our aim is to present various viewpoints and the reader gets to decide what to support at the end of the day.”

Moreover, she denounced the singling out of the AUC Times in particular, when many newspapers have tackled the issue before. She further noted that the magazine’s editorial policy will remain the same despite the attack.

Gheita’s statement comes amid increasing attacks on alleged homosexuals in Egypt since 2013, in particular by the Ministry of Interior and domestic media.

The MP said, in a televised interview on Wednesday, that the article conveys a sympathetic message towards homosexuals by highlighting their struggles. “This definitely conflicts with our morals, as homosexuality cannot be tackled as a normal issue.”

According to a 2013 survey by the Pew Research Centre, 95% of Egyptians believe that homosexuality cannot and should not be accepted in society.

Some people actually believe that there are only few or no homosexuals in Egypt, while others believe they should be imprisoned.
Egypt ranked among the lowest countries in terms of acceptance of homosexuality, according to the Pew survey.

“It is bizarre how the people who are responsible for legislative reforms are unaware of the fact that homosexuality is not illegal,” she said.

In January 2015, a Cairo court acquitted 26 defendants accused of “debauchery”, after having been suspected of being involved in homosexual activities in a bathhouse. The case drew international criticism for the televised police sting on the men, led by controversial TV host Mona Iraqi.

In December 2014, eight men were given one-year prison sentences for allegedly taking part in a gay marriage ceremony on a Nile boat.