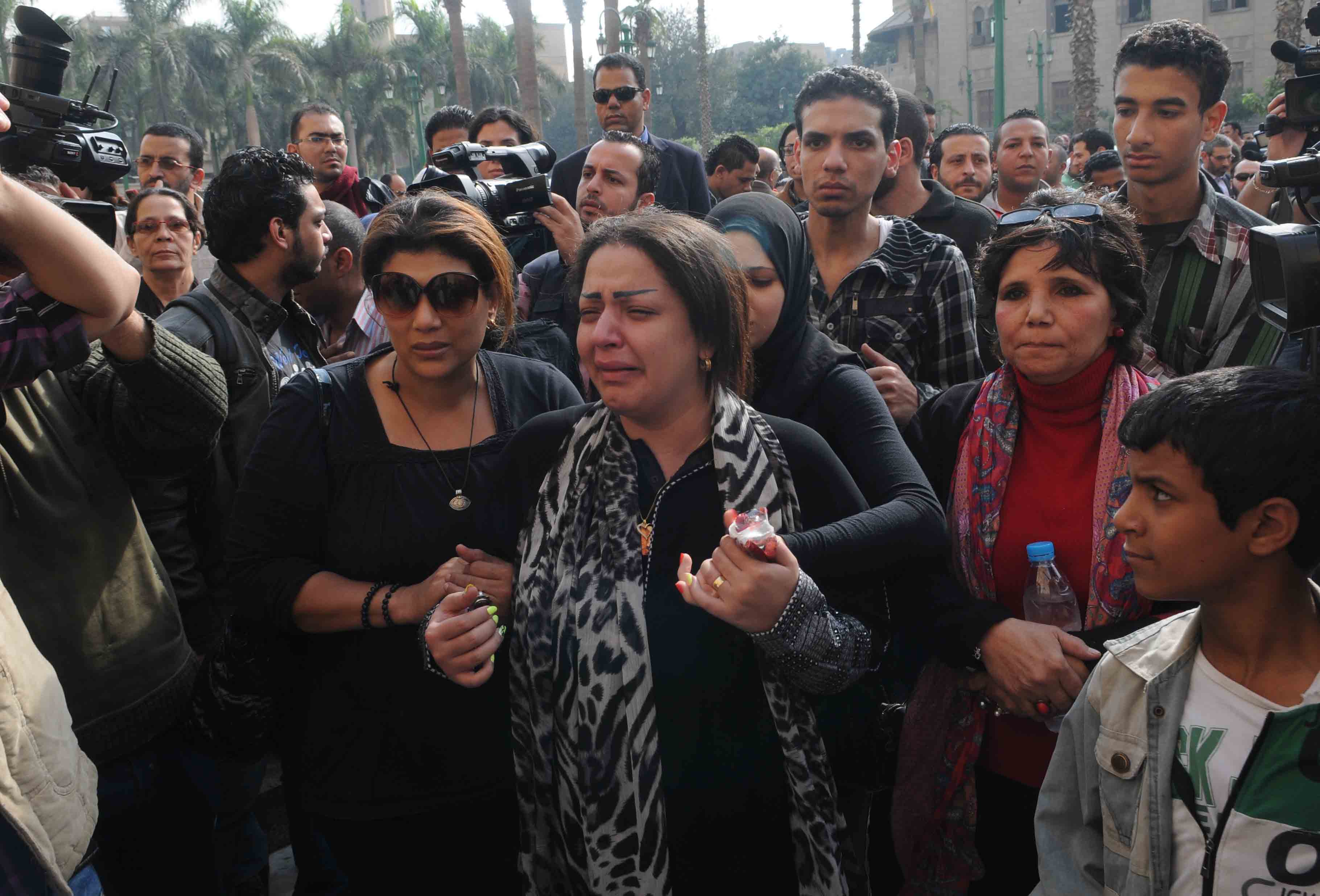 In the five years following the 25 January Revolution, the real estate market proved to be among the few economic sectors that were capable of remaining buoyant amid the political and economic turmoil.

Amid the continued depreciation of the value of the Egyptian pound against the US dollar, real estate proved to be an infallible investment to hedge against market fluctuations..

The devaluation of the pound has led to the recovery of the real estate market in Egypt, where Egyptians resorted to buying real estate as a safe haven in the face of the weak local currency.

Hussien Sabbour, CEO of Al-Ahly for Real Estate Development, said the real estate sector is a means for high-income people to “hide” their money, whether legally obtained or not, to make profit.

“Egypt is considered one of the countries with the highest interest rates on housing units,” Sabbour said. “The government is a bad manufacturer and a bad trader, and it has to allow private companies to work on facilitating the lands and building them.”

Sabbour added that low-income housing is therefore witnessing decreased demand due to the low incomes of the Egyptian youth demographic, as well as high interest rates.

Sabbour noted that there is an annual demand for 500,000 new housing units from newlywed couples.

He said investment in real estate has increased as the prices of residential units are increasing at rates faster than the interest rates generated from deposit holdings at banks. As such, people prefer to invest in the real estate market rather than through savings in banks.

He explained that the devaluation of the Egyptian pound will encourage foreigners to buy real estate or residential units in tourist areas in Egypt, such as Sharm el-Sheikh and Hurghada because the pound is very cheap rather than his currency.

In what follows, we will focus on new real estate areas, which have been the site of high turnout from buyers, especially in new cities with their proliferation of residential, hospitality, office, and rental units.

Approximately 45% of individual investors in Egypt prefer to invest in real estate sector rather than the rest of the other investment products such as investment certificates, shares and gold, Ahmed Al-Masoudi, the CEO of AqarMap, told Daily News Egypt.

A recent profile of the Egyptian real estate market conducted by Daily News Egypt revealed that the sector is projected to grow by 70%, from $7.2bn in 2012 to $12bn by 2020.

Over 50% of investors and 69% of real estate professionals surveyed in a recent study by YouGov, an internet-based market research firm, expressed confidence in the Egyptian real estate market’s expected growth over the next 12 months.

The report, which surveyed almost 500 investors and real estate professionals, revealed that 54% of investors expect Cairo’s real estate market to grow over the next year, while 28% expect the market to stabilise.

According to YouGov’s analysis, Egypt’s residential sector topped the list as the most attractive asset class, with 60% of investors having $10m to invest in Egypt’s property market selecting residential assets, followed by retail (9%) and hospitality (9%).

In an interview with Daily News Egypt, Ian Albert, regional director at Colliers International Middle East and North Africa, said residential demand is growing by 2% in Cairo. The national demand is around 90,000 residential units each year, prompting the market to develop in light of this high demand.

“As for the rental market, the sector has transformed in the last three or four years which led people to access different goods. There is change in demographics which applies to residential and rental units, as 70% of the population are now in the middle-income bracket of $25,000 income, so that in the past two years we have seen a growth in shopping, which increased the rental demand,” Albert said in the interview.

The latest report issued on 5 April by Colliers international, entitled “Cairo Real Estate Market Remains Resilient”, stated that 52% of Cairo residents can afford residential units priced between $26,000 and $35,000. However, next to no new residential developments are offered at these prices by the private sector.

Colliers said Cairo’s population is increasing at 2% annually, while housing supply is growing at 1%.

The report said that the gap between supply and demand in 2015 is a shortfall of approximately 125,000 units with demand in the city across low to high-income groups reaching 225,000 units.

CBRE noted that the demand is constituted largely of low-income buyers who represent 51% of the total demand; the high-income demographic accounts for 9% of demand.

The rental rates for two-bedroom apartment in New Cairo appreciated to $1,225 per month at the end of 2015, an increase of 4.75% in a year over year comparison.

The average cost of a three-bedroom property in New Cairo is $2,560 per square metre, a rate that more expensive than that of apartments, often by a factor of two.

In terms of capital value, there is only marginal variation in apartment prices between New Cairo City and 6 October City with cost ranging between $1,225 and $1,190 per square metre respectively.

The demand for second homes rises

Although the socio-economic situation has worsened, real estate developers are laying the foundations for a new wave of second homeowners. Previously ownership of a second home in coastal areas was high-income earners and the wealthy; however, due to the availability of supply, more people have purchased second homes.

Maged Helmy, the chairperson at Wadi Degla Developments, said that second homes are not so much a luxury as a way of life for many Egyptians, especially in the places of high-demand.

Sokhna and the North Coast are the most prominent areas for the construction of second homes because of their scenic locations, temperate weather and, most importantly, proximity.

CBRE mentioned that the total stock of regional and super regional shopping mall retail space in Cairo surpassed 1m sqm during 2015, with a growth rate of 20% year over year.

The average rent prices are currently around $1,400 per sqm and are expected to remain stable through 2016.

CBRE noted that the retail sector is widely viewed as key growth sector, with significant future expansion driven by the fact that 60% of the total population are under 30 years old.

The report expected that an additional 1m sqm allocated to the retail sector to double the current stock of the retail market.

The supply of office is experiencing grow, especially supply of grade A commercial offices in East and West Cairo. Office residencies occupied 960,000 sqm in late 2015.

The report pointed out that approximately 40% of the total supply is currently occupied.  New office supply is just 60,000 sqm in the coming 18 to 24 months . However, there is a large amount of space expected to enter the market during 2018 depending on executing the planned and announced timeline.

CBRE expected that vacancy rates would be reduced at a marginal rate in 2016.

In its recent report for Q1 of 2016 entitled “Top Trends for the Cairo Real Estate”, JLL said that  said that the recent devaluation of the Egyptian pound is challenging for the office and retail sectors because most of renters face problems with accessing dollar sources in order to pay rent.

Head of JLL in Egypt, Ayman Sami said that Cairo market could absorb 800,000 sqm of retail space by 2020, adding that 60% of this number is scheduled to be completed before the end of 2018.

350,000 sqm of new commercial space is expected to be constructed in next 5 years

“In the current environment, being flexible and tenant-centric is important as a number of international tenants are increasingly looking to rent or sell existing offices in order to be able to shrink or expand their operations quickly,” according to the latest report of Colliers.

Colliers reported that 350,000 sqm of new commercial space is expected in the next 5 years. The rental premium was registered at 25% to 30% due to commercial developments, which combines international standard build quality.

“Regarding office space, the evolution of Cairo is moving forward where there used to be a small percentage of office buildings, with the rest being residential buildings.  However, in the last two years, the demand is moving towards office buildings, as we see in the Smart Village and other places.  Now there is a great demand from local and international companies for office buildings” Albert said in an interview with Daily News Egypt.

Albert said that the developers now have a hot spot in Cairo. Their eyes are on the middle-class bracket whose members earn $10,000 to $20,000.

Colliers sees that the most promising areas in real estate sector are 6 October City, Tagamoa, and Nasser City.

Agarmap said that with regard to the demand for offices, there would be a gap of about 2.4m sqm by 2020.

Other than the demand for residential units, the real estate market witnessed a growth in demand for commercial offices. Growth in this sector represented 73% , followed by administrative offices at 18%, and clinics at 9%.

The most promising places in the real estate market

AqarMap CEO Amad Al-Masoudi in an interview with Daily News Egypt said that the most promising places in the real estate market are in New Cairo. Almsaodi stated that some other projects have been launched, like Al-Ahly for Real Estate Development, Zizinia Real Estate, and Wadi Degla.

The Central Plateau, Maadi and Katameya have important projects by Emaar and Morshedy Group. 6 October City and Shorouk have other projects like Grand City.

Sheikh Zayed city saw the largest growth in terms of prices, according to AqarMap’s survey. Prices in the district increased by 24.4% over the current year compared to the past year where the price per metre ranged between EGP 1,900 and EGP 6,100 for apartments, while standing at an average of EGP 3,600 per metre for villas.

He pointed out that the biggest tranche in demand are low-income citizens, but unfortunately, there are no residential units commensurate with their capabilities, except for two axes.  The first are the low-income housing projects developed by the government in cooperation with private companies like Degla Palms project developed by Morshedy Group.

The project is one of the successful projects in meeting the demands of this tranche. The second axis is direction to the informal housing in informal areas. This tranche represents 50%-60% of the demand in the property market, with about 30% being the middle-income tranche, and 5%-10% of the tranche demanding luxury housing.

Enclosed complexes such as Palm Hills and Beverly Hills witnessed an increase in demand, according to the analysis of Colliers International.