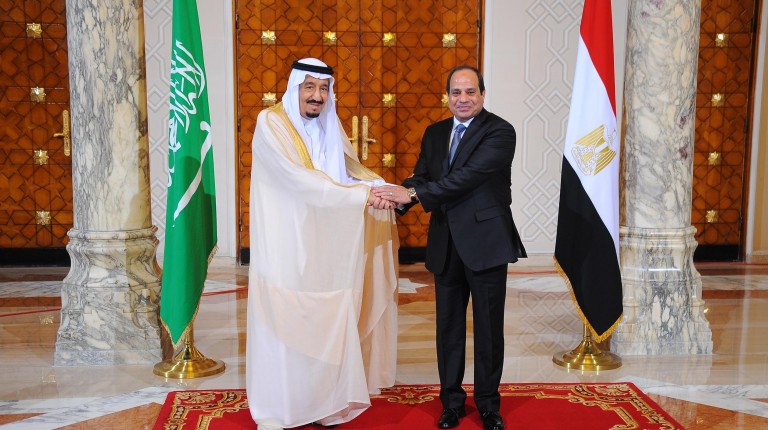 CEO of Saudi Egyptian Construction Company (SECON) Darwish Hassanin said that the visit of Saudi Arabian King Salman bin Abdulaziz Al-Saud to Egypt will be followed by Saudi investments from the private sector as well as the government.
Hassanin noted that the Saudi King’s timely visit bears several implications for the economy, as well as different political and strategic reasons. Saudi investors account for the largest number of Arab investors in Egypt, according to Hassanin. He pointed out that fluctuations in the market, in terms of oil prices and currency exchange rates, have caused Egyptians, especially those concerned with economic affairs, to look for the visit to prompt economic cooperation protocols that would strengthen ties built on economic integration between both countries.

The number of Saudi companies established in Egypt amounts to about 3,600 companies, which includes investments worth $23.5bn since the end of June 2015. According to Hassanin, investments have been in the Egyptian market for years. They also cover several sectors, including banking, insurance, financial services, and advisory, training, real estate, tourism, manufacturing, communications, medical services, agriculture and land reclamation, as well as contributions from Saudi companies in Egypt’s national projects. These projects include the 1.5m acres project, which will drive comprehensive development in the proposed desert areas outside the Nile River Valley and the Nile Delta, as well as the establishment of agricultural communities and integrated industrial areas. Saudi companies take part in other major projects, such as the New Administrative Capital and the New Suez Canal. These projects contribute to Egypt’s national output and reduce high unemployment rates, according to Hassanin.

Hassanin said that Saudi King Salman’s visit to Egypt also carries an important message that both Egypt and Saudi Arabia are the balancing force for the stability and strength of the Arab world. “I expect more investments in Egypt, whether from the private sector or the government, to be injected in Egypt,” Hassanin added.

He noted that Egypt is very welcoming to Saudi investments and has many factors that attract investors, where businessmen can inject money in various sectors including real estate, tourism, and agriculture, supported by the high population that can implement these projects.

“I call investors, particularly from Saudi Arabia to come to Egypt, where they can find the appropriate investment climate,” Hassanin added. “Let’s build these investments for the benefit of both countries.”

SECON was founded in 1975, with capital of $50m. This capital was split equally between the governments of Saudi Arabia and Egypt. The company operates mainly in Egypt’s real estate and tourism markets.

The company’s capital increased twice, most recently in 2015. The capital was increased to $318m. This latest increase of $243m was provided in equal measure between Egypt and Saudi Arabia. The Saudi government provided $121.5m, while Egypt paid its share in-kind with three land plots of about 100 acres in New Cairo, New Damietta, and New Assiut.

Hassanin said that his company aims to achieve more this year than in 2015. The company increased its profit in 2015 by 65% on the overall profits and 85% on the net profit, compared to 2014. The company exceeded its budget forecast by 10%.

Hassanin said the company will implement three projects on 97 acres that the company received as part of the in-kind share from the Egyptian government to increase the company’s capital. He added that all the designs for the projects are ready and awaiting the ministerial decisions to begin operations during the second half of 2016.

He explained that the first project is the Riyadh SECON in New Cairo, which will be built on 68 acres with investments of around EGP 2.8bn-EGP 3bn. The project consists of an integrated compound and residential units for a high-income demographic. According to Hassanin, the project includes 1,928 residential units of five models and areas ranging between 145sqm and 195sqm. The first phase of the project includes 48 apartment buildings, as well as a variety of commercial services, including a shopping mall and shops, in addition to a social club, a mosque, and green areas. The implementation of the projects begins in the second quarter of this year.

He explained that the project is to be implemented in three phases that will take place in sync.

The foundation stone for this project, Riyadh SECON, was laid at the end of last month in the presence of Mohammed bin Hamoud, the assistant minister of finance of the Kingdom of Saudi Arabia and chairperson of SECON, and Major General Essam El-Din Ramadan, vice chairperson, in addition to members of the Board of Directors and Chief Executive Officer of the company, as well as Hussein Sabour, the advisory designer of the project, alongside a number of real estate investors.

Hassanin said that the company planned the project so that buildings will save as much space as possible for greenery and landscaping.

He pointed out that the company intends to begin constructing 44 buildings, which is about 40% of the project’s total capacity. He added, that the company has the attributed the implementation of those buildings to Egyptian Contracting companies that are members of the Egyptian Federation for Construction and Building Contractors, based on limited tenders. These companies include Alshams, Al Rabat, Al Karnak, and Port Said. The implementation will take 18 months, while the entire project will end within three years.

Hassanin said the units in the project will be completed and aim for the highest quality, as the project is channelled to the middle-income wage earners. They will be marketed at moderate prices, despite the high-quality of designs.

Hassanin explained that the company will start offering the first phase of the project during the Cityscape exhibition taking place this week.

The second project is a resort in New Damietta. The project lies on an area of 17 acres. It will include a four-star Doubletree by Hilton hotel, which will feature 120 rooms. The hotel will be implemented on 25% of the land area. Hassanin said the company is undergoing discussions with the Hilton to include them in the design process.

The rest of the area will be tourist residential units. The company will have two hotels; the first is a five-star hotel overlooking the Nile, in Maadi, with a capacity of 256 rooms. The second hotel is the four-star hotel in New Damietta on the Mediterranean near the port of Damietta and the new logistics zone.

The third project will be in new Assiut, targeting media-income wage earners on an area of 12 acres.

Hassanin said that SECON is currently conducting studies to rely on solar energy at a rate of 20% to 30% of the total energy required, being a clean and environmental-friendly energy that can limit pollution because it does not rely on generators. Solar energy also reduces the size of electric bills for users.

Hassanein said the company will receive ministerial decisions for the projects within days. The company has applied for the decisions and paid all fees for the two projects. Riyadh SECON in New Cairo will be constructed an area of 68 acres with investments ranging between EGP 2.8bn and 3bn, and the Dora New Assiut on 13 acres. The company has yet to seek a ministerial decision for SECON Resort in New Damietta.

“We are closely following major projects put forward in the current period, especially the New Administrative Capital and the development of the northwest coast in an effort to increase our investment,” Hassanin said, noting that the company is awaiting the right opportunity that suits its field.

He pointed out that President Abdel Fattah Al-Sisi was able to achieve many accomplishments that carried the clear hallmarks of his great effort in order to improve the situation of Egypt in various fields, led by the Suez Canal Area Development Project.