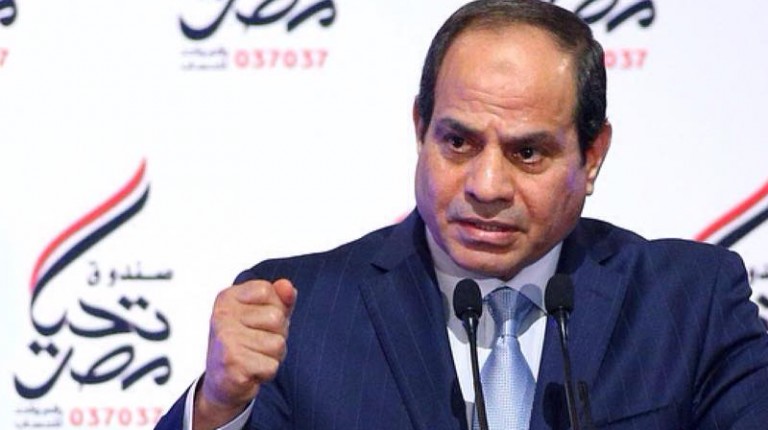 A scheduled meeting between the Egyptian president and a group of public figures representing the political and social factions on Wednesday was monopolised by President Abdel Fattah Al-Sisi, who spoke for nearly an hour and a half.

The meeting comes amid public controversy sparked by the signing of an agreement between Egypt and Saudi Arabia last week, which would transfer the sovereignty of the Red Sea islands of Tiran and Sanafir to Saudi Arabia, despite years of Egyptian sovereignty over the lands.

Al-Sisi’s speech was broadcast live on local TV channels. Broadcasting was interrupted when Al-Sisi objected on one of the attendees’ attempt to comment on the president’s statement.

The meeting was attended by over 100 figures, according to Diaa Rashwan, former head of the Press Syndicate, who was present at the meeting. Rashwan told Daily News Egypt, after the meeting, that he had not expected the meeting with the president to involve exchanges of opinions or discussions. Nonetheless, he said that the floor was opened to a few questions and comments, off air.

“Based on previous encounters with Al-Sisi, it has been my experience that discussions only take place among a group of no more than 30 people,” Raswan said. More importantly, he found the encounter to be “right on time, very useful”.

Rashwan said he supported the protocol followed by Al-Sisi when signing the demarcation agreement for the maritime borders with Saudi King Salman bin Abdul Aziz. “Nowhere in the world would public debate have occurred before the official signing,” he said.

Moataz Abdel-Fattah, a political science professor who attended the meeting, told Daily News Egypt that, before Al-Sisi’s speech, Prime Minister Sherif Ismail and Foreign Minister Sameh Shoukry reviewed a number of documents related to the two Red Sea islands, and that they did not find any evidence proving Egypt’s sovereignty over the islands in the documentation.

“They found that these islands are originally Saudi, and that Saudi authorities asked for Egyptian administration of these islands then,” Abdel Fattah clarified. He highlighted that Al-Sisi’s speech reveals the state’s intention to face “attempts at destroying the state”, and that Al-Sisi revealed that his great duty is to defend Egypt against vandals.

Regarding the “evil powers” that Al-Sisi referred to in his speech, Abdel Fattah noted that several indicators reveal that current crises in Egypt could be due to “conspiracies”.

With regards to Al-Sisi’s criticism of the performance of the media in his speech, Rashwan viewed his criticism as being well placed. “When tackling the issue of the islands of Sanafir and Tiran, the media showed a great deal of ignorance, especially in interviewing irrelevant sources and giving the issue a political angle, at the expense of historic and legal background,” he said.

On the other hand, MP Anwar Sadat who also attended the meeting, contested Rashwan’s claims that the door was open for discussion after Al-Sisi’s speech. “It was simply a photo-op,” Sadat told Daily News Egypt.

Sadat said he believes Al-Sisi aimed to address different cases beyond the two islands to highlight the state’s efforts in the face of what he perceives as “attempts to undermine him”.

“According to the state, the two islands belong to Saudi Arabia and Egypt was managing them, but at the end gave back the land to its owners,” Sadat stated.

“The parliament will have its own assessment [of the matter] and listen to the experts before making its final decision,” he added, despite the parliament currently being preoccupied with the evaluation of the cabinet programme.

This comes as other experts were critical of the handling of the issue. Political professor at the American University in Cairo (AUC) Said Sadek explained to Daily News Egypt that he believed the speech was “angry, defensive and came late”.

“Uproar over this issue has been ongoing for a week. Why did the president wait for escalation to reach a peak—with calls for protests?” Sadek said.

Sadek disagrees that the maritime borders agreement is a matter that should be solely decided on by the state’s higher leadership. “When it comes to public policies, you must properly guide public opinion, and present the issue in the media,” Sadek said, denouncing what he referred to as a “lack of professionalism” on the part of the leadership.

Sadek further pointed to the possibility that Al-Sisi has acted out of anxiety, after his political rivals, Hamdeen Sabbahy and Ahmed Shafiq, received media attention in the past period. “These days, the president feels his that popularity is at stake, especially among strong supporters,” Sadek stated.

“The president chose to place all the blame on the media, which he thinks is turning a blind eye to his achievements, disregarding the fallouts of his bad management and lack of experience, which resulted in the downgrading of his popularity,” he added.

Moreover, Hassan also supported the idea that Al-Sisi was sending a message to his rivals. “I am afraid that next time there will be more explicit addresses, or perhaps, further measures taken against his opponents,” he stated.

On a further note, Sadat commented on Al-Sisi’s tackling of human rights issues, stating that the president admitted that human rights violations were committed, but expressed his support for improving the balance between security concerns and the respect of human rights.

Finally, Mohamed Abdul Aziz, director of Al-Haqanya Law Centre criticised Al-Sisi’s constant referral to “conspiracies” in his speech. “Al-Sisi made it look like failure was coming from other people, former regimes, and not at all the responsibility of the government,” Abdul Aziz commented.

“We are indeed suffering from the policies of the past regimes, but we cannot keep blaming others,” said Abdul Aziz.

He further criticised the president’s failure to admit issues and negligence in the human rights’ file, and an attempt by Al-Sisi to portray a positive image, despite no indications of any positive progress on the ground.

“On the contrary, the situation is worsening. Real measures are being taken are against human rights, the work of civil society, etc,” he concluded.