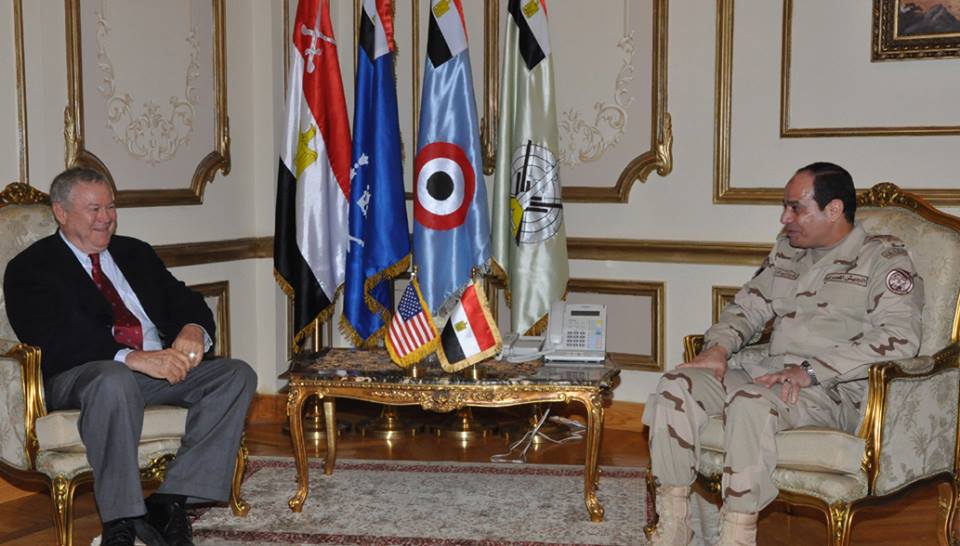 President Abdel Fattah Al-Sisi delivered a speech on Wednesday morning during a meeting with number of “representatives of society” in Itihadiya Palace, in which he focused on the Red Sea islands crisis and the Regeni case.

The speech came in the wake of major uproar, sparked among the public following the maritime demarcation agreement that transferred Egyptian sovereignty of Sanafir and Tiran islands to Saudi Arabia.

“Egyptians should stand as one hand against the evil powers. We did not sell our land. What happened is that we gave the Saudi people their land. Egyptians are currently suffering from a state of collective suicide due to fourth generation warfare, which targets the loss of Egyptians’ confidence in their state institutions,” Al-Sisi said during the speech.

He further asserted that the Egyptian government did not relinquish “a grain of sand” from Egypt’s land, and that the two islands are originally Saudi, noting that the case began in 1990 after Saudi Arabia demanded the demarcation of maritime borders. He stated that Egypt issued a presidential decree at the time to begin the demarcation process.

He further explained that “no details” of the bilateral negotiations were made public to both the Saudi and the Egyptian people, “lest the rise of disputes fabricated through the media create a divide between the two countries” and increase conflict inside the Arab world.

“The demarcation process was launched after accurate reports from sovereignty institutions in Egypt, such as the Egyptian Intelligence apparatus, the Foreign Ministry and the Ministry of Defence, which provided studies proving the Red Sea islands’ affiliation to Saudi Arabia. Nearly 11 sessions of bilateral negotiations were held, in addition to statements issued from technical committees which agreed on the Saudi sovereignty over the two islands,” Al-Sisi said.

He condemned Egyptian media outlets’ tackling of the case, noting that the transfer of sovereignty will enable Egypt to prospect for oil in the Red Sea, an activity that was suspended until the end of the demarcation process.

He further pointed to the example of a similar process with Cyprus during a previous demarcation process of maritime borders, noting that when it reached its conclusion, Egypt started the prospecting process that led to the discovery of the giant Zohr gas field in the Mediterranean.

He moreover called on Egyptians, including media outlets, to not to discuss the case again, arguing that the whole matter is now in the hands of the parliament, which will in turn discuss the agreement and has the freedom to approve or refuse it.

The president further referred to the murder of Italian student Guilio Regeni in Egypt, whereby he once again expressed his condolences to Regeni’s family, affirming Egypt’s commitment to provide transparent and comprehensive investigations into the murder.

He also inquired as to the fate of the missing Egyptian citizen in Italy, Adel Mowad, who has reportedly been missing since November 2015.

“The Egyptian prosecutor-general is currently responsible for undertaking investigations regarding Regeni. It is unfortunate to say that a number of Egyptians and media outlets have played a negative role in the case by implying that Egypt’s Ministry of Interior is involved in Regeni’s murder,” Al-Sisi went on.

He described media outlets’ approach to the case as “disturbing”, stating that journalists and editorial boards should not depend on social media as a source of news.

Al-Sisi also discussed human rights conditions in Egypt, stating that providing rights such as decent shelter, education and “awareness” to every citizen is more important than freedom of opinion.

“Societies are built through work, not only through freedom of opinion,” Al-Sisi extrapolated.

Al-Sisi said the number of jailed young people is currently under revision, noting that recently a release has been granted to four segments of young people who were proven to innocent.

He confirmed that efforts are exerted to achieve a balance between guaranteeing safety and human rights by adjusting the strategy of the security apparatus with citizens.  He moreover praised security efforts exerted in Sinai and the progress achieved in rebuilding stability there, despite the increasing number of martyrs.

The president further claimed that Egypt is now subject to a conspiracy through the “economic embargo” imposed on it and the offensive attacks launched to “isolate” Egypt, claiming that nonetheless all such attempts have failed.

The president added that reactions from Egyptians regarding the Regeni and Red Sea cases “weakened” Egypt’s position in front of the world.

One of the attendees began to speak after Al-Sisi thanked them for listening, but Al-Sisi quickly interrupted him, saying he did not “grant permission” for anyone to speak. Broadcasting was then abruptly suspended.

Regeni’s murder will not affect relations with Italy: Al-Sisi