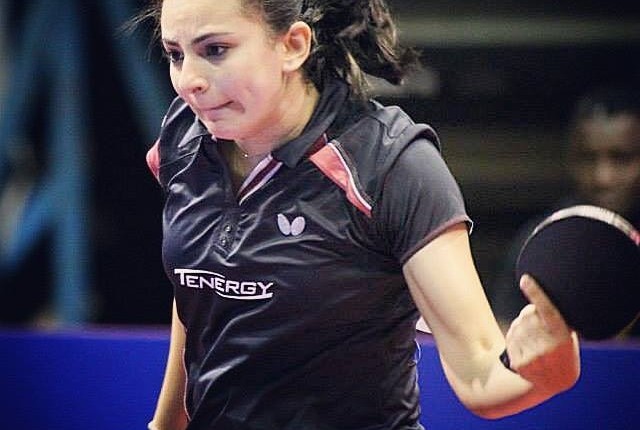 Egyptian table tennis champion Dina Meshref, 22, met with Daily News Egypt for an interview after qualifying for the 2016 Rio Summer Olympics following a triumphant performance at the 2015 African Games.

How did your career in table tennis begin?

However, I used to visit the table tennis hall occasionally since my father was the head of sports at Al-Ahly Club at the time. Some coaches stepped in to help me learn the rules of the game, and taught me how to use a table tennis racket. After a couple of attempts at playing the game, I decided to switch to table tennis and quit playing in the tennis court.

One day my parents asked me: “would you like to go to your tennis lesson or play ping pong?” I remember thinking about it for a second and then answered: “ping pong”. Since that day, I never went to another tennis lesson, and made the full switch to table tennis.

Who is your idol in table tennis?

Who are your strongest rivals?

There are many strong rivals in the game. I believe that most of the international matches are very strong ones that require lots of concentration and precise pre-planning. Most European and Asian players are really good, even if ranked below me. In Africa, my strongest rivals are my teammates from Egypt, Nigeria, and Chinese players playing for Congo.

Your father is the president of the Tennis Table Federation in Egypt. How did this affect your sports career?

Having my father as president of the Table Tennis Federation has positively affected me in terms of his professional management skills. He was a table tennis champion and has a lot of experience in the field.

Hiring a Chinese coach instead of a local coach was a decision my father made and it has definitely benefitted me and increased my ability to win matches. Arranging training camps in China and sometimes bringing Chinese players to practice with us in Egypt has also benefitted me as I’m able to learn how to play against players from different backgrounds. Regarding an extra personal advantage, neither my parents nor myself have ever accepted this kind of stance. Morals and fairness are really important to everyone in my family.

Can you mention some of your father’s victories that you are proud of?

Can you talk about your most significant victories?

My most significant victories include winning first place and the gold medal in the All African Games held last September in Congo, and also being the first Egyptian ever to do so.

I also qualified to be among the top 16 players in the last World Cup held in Japan in 2015 after beating the 19 world ranked player from Hong Kong.

How did you qualify for the Olympics?

I qualified for the Olympic Games through the All African Games held in Congo last September. The first four players qualified, and I won first place.

How are you preparing for the Olympics?

I am currently practicing in Egypt to prepare for the Olympic Games, and I am working on both table tennis and my physical fitness. I will also visit China to play matches in the Chinese league in May, and then participate in a training camp in China in June. As for July, I will participate in a training camp in Austria.
Which place are you expecting to reach in the Olympics?

I am hoping to reach round 16; however, anything is possible and I would be very happy to reach even higher stages than that of course.

Did you participate in any of the Previous Olympic Games?

Yes I did. I participated in London 2012 and in the Youth Olympics held in Singapore 2010.

What were your results?

In Singapore, I won in my group in the singles event to qualify to be among the top 16 players. I ranked 13th at the end. In the teams event, my teammate Omar Bedair and I won ninth place. In London, I won the qualifications round against Nigeria’s number one player. Then I won against a Russian player ranked higher than me in the first round. In the second round, I lost against a Romanian player. In the end, I was among the top 48 players.

How often have you played doubles with Nadeen El-Dawlatly? What were your results? How was the experience?

How often have you played mixed doubles with Omar Assar. What were your results? What did you learn from him?

What are your latest victories?

My latest victory was winning the African Cup (Africa’s Top 16) in Sudan last February, and thus qualifying for the World Cup that will be held in October.

When and where is your next championship?

My next championship will be at the International Tournament in Poland, being held 20-24 April.

How important for you was the 2015 African Games held last September in Brazzaville?

It was such an important tournament for me. Qualifying for the Olympic Games was one of my dreams and goals. I really enjoyed the London Olympics in 2012, so I was very eager to qualify for the games in Rio as well. I prepared very hard before the All African Games, and I attended two training camps in China in order to be on top of my game ahead of the qualifiers.

After booking a place in the Rio Olympics and being among the top four players in Congo, I was really eager to win the title as well in order to break the record and be the first Egyptian to win a gold medal in the All African Games’ singles’ event. I knew that I was capable of winning since I prepared very well before the tournament and exerted a lot of effort, so I wanted to give out my best in the tournament and be rewarded for my hard work.

How did you qualify for the World Cup held in Colombia?

By winning first place in the African Cup (Africa’s Top 16) that was held in Sudan in February.

How are you preparing for the World Cup?

Through my preparations for the Olympics (training camps in China and Austria), I believe that I am preparing for the World Cup as well.

What do you expect your results in the World Cup will be?

I hope I can achieve a better result than I did last year in Japan. I really want to reach the quarterfinals or even try to win a medal.

What is Egypt’s position in the sport on an international level?

In the previous Teams World Championships held in Malaysia last February, we took 29th place (in both women and men). Both teams’ rankings for the month of April were also 29th. In general, Egypt’s level is improving on the international level. Many high-level countries consider us as fierce competitors nowadays.

How could the sport be improved in Egypt?

The sport could be improved in Egypt by players attending more training camps in China. Also, fully integrated centres, combining both sports, and education facilities are very important to improving the practice of table tennis in Egypt. Europe and Asia have a lot of these and are leaders in the game.

Why do we not have Egyptian tennis table champions as we do in squash?

I am not really sure, because I am not fully aware of what’s happening in squash. Of course, I know about the Egyptian legends Nour El- Sherbini, who is a friend of mine, as well as Raneem El-Waleely, Mohamed El-Shorbagy, and Ramy Ashour, and I am really proud of their victories. However, I am not fully aware of the athletes they are competing with or their nationalities. Maybe this is because squash is not an Olympic sport.

New mobility for people living with disability in DRC