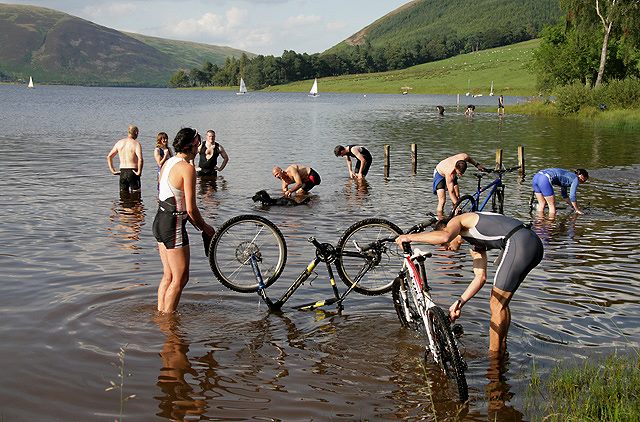 Khadiga Amin, the first Egyptian woman to compete in an Ironman triathlon, spoke to Daily News Egypt about her sporting career and her recent participation in the 2016 Sharm El-Sheikh ATU Sprint Triathlon African Cup and Pan Arab Sprint Triathlon Championships, which concluded its events on 2 April.

What is the Ironman triathlon?

A triathlon is a multiple-stage race with three continuous and sequential endurance disciplines: swimming, then cycling, and then running. An Ironman Triathlon is a 3.8km-swim, then cycling for 180km, and finally running 42km.

When did you start your sporting career?

I started out with practicing karate when I was young, then I switched to horse riding, and later I began cycling. I was introduced to a group called Cairo Cycles Club, established in 1985. The majority of this group were foreigners and some of them competed in triathlons. One of the group members, James Engle, an American who was living in Egypt, taught me almost everything about triathlon races. I started training for triathlons in 2012.

You were the first Egyptian woman to compete in an Ironman Triathlon. Can you describe the experience?

The 2014 Ironman was held in Mallorca, Spain in September of that year. I competed in the 25-29 age category, and out of the 20 of us who competed, I was ranked in the first ten. I do not remember who won gold l, but she was probably European.

Who organises these types of races?

A private company, the World Triathlon Corporation. They organise full and half-distance Ironman triathlons as well as other events. The first Ironman triathlons the company organised in the Middle East were in Bahrain in 2015 and Dubai in January 2016

Which other races have you competed in and how did you rank in these races?

I competed in races organised by a different company, Challenge. One race was in Bahrain in December 2014 and another in Dubai in February 2015.

Both races were half-distance triathlons, so 1.9km swimming, 90km cycling, and 21km running.

Did you participate in any other races during 2015?

Yes, in March 2015, I participated in South Arica’s Ironman.

Do you have a coach?

No, I don’t have a coach, but I always ask for advice from coaches abroad and get information from books about triathlons.

Any plans to participate in the Olympics?

I am competing in the half- and full-distance Ironman Triathlons as an amateur. My goal is to compete in a professional capacity.

Are you satisfied with media exposure?

I believe the media is not giving enough attention to triathlons, after all it’s still a new sport in the Arab region. But I hope that one day triathlons and triathletes receive the same publicity as football, squash, and tennis players. It’s a fantastic sport and with the right media exposure it can grow very quickly.