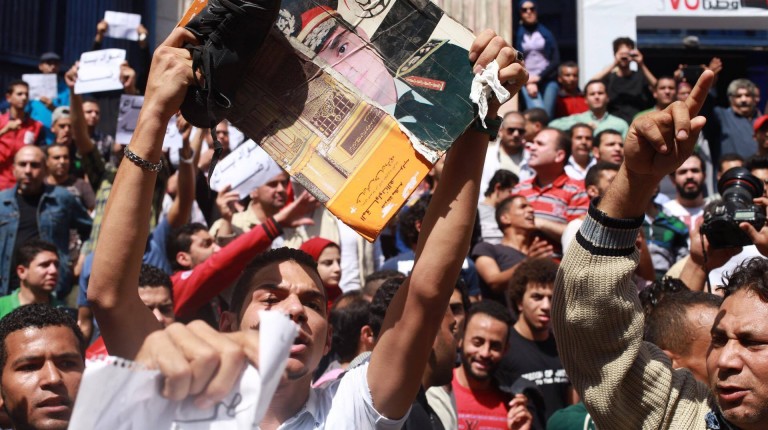 Hundreds of anti government protesters have gathered in front of the Press Syndicate in downtown Cairo as Friday protests against the recent Egyptian-Saudi maritime demarcation escalate.

Protesters decried the Red Sea islands Tiran and Sanafir’s sovereign transfer and called for the fall of the government.

The Syndicate opened its headquarters to journalists assigned to cover the protests, said Gamal Abdel Rahim, the secretary of the Press Syndicate.

Protest organisers and the April 6 Youth Movement asked protesters en route to the Press Syndicate to walk in groups.

In Ain Shams, security forces and civilians working with the police arrested nine protesters. The arrested men were escorted to microbuses belonging to the police, eyewitnesses told Daily News Egypt.

The Ministry of Interior confirmed the nine arrests but did not provide information about arrests in other parts of the country.

According to the Socialist Popular Alliance Party, around 12 protesters were arrested in the Ibrahimia district of Alexandria.  However, several media reports state several protestors are being released from the police station.

In Cairo, Central Security Forces dispersed protesters demonstrating in front of the Moustafa Mahmoud mosque in Giza, firing teargas into the crowd.

Reports suggest that no single political affiliation has dominated the protests. However, Islamist and secular entities are reported to have participated.

Activists called Friday the “Day of land and honor” in an expression of anger at the sovereign transfer.

Three political parties—the Bread and Freedom Party, the Socialist Popular Alliance, and the Egyptian Democratic Social Party—announced their support of the protesters, vowing to provide media and legal assistance.