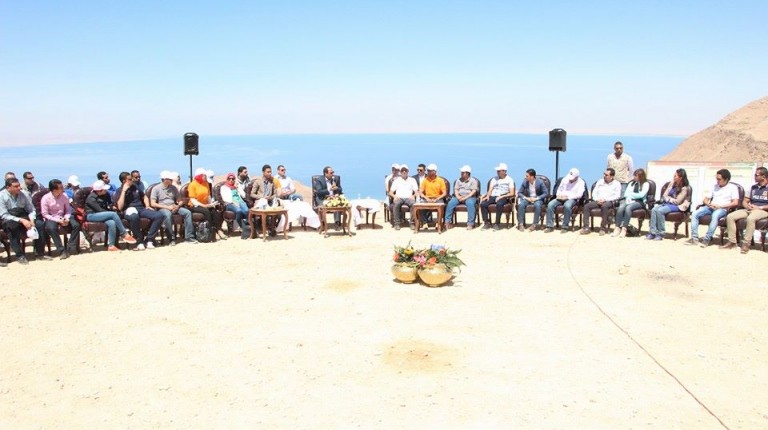 Amid Friday protests that raged in the capital and various other cities, President Abdel Fattah Al-Sisi was inspecting the Al Galalah city project, which is being built in the Red Sea governorate.

Friday was dubbed the “Day of land and honour” by activists and citizens, who protested and expressed their anger at the sovereignty transfer of the Red Sea islands of Sanafir and Tiran.

Three political parties—the Bread and Freedom Party, the Socialist Popular Alliance Party, and the Egyptian Social Democratic Party—announced their support for the protests, vowing to provide media and legal assistance.

During the inspection tour, Al-Sisi said the two Red Sea islands are the “property” of Saudi Arabia, and the case was referred to the parliament, which in turn will settle it.

He was accompanied by representatives from the Ministry of Youth and Sports, members of the presidential programme for youth, several youth groups, and journalists, according to official statement issued by presidency spokesperson Alaa Yousef.

The statement added that Al-Sisi opened discussions with those accompanying him on a number of issues related to the internal arena and current vital issues in Egypt. The president spoke about the necessity of improving education and health sectors, noting that state authorities are continuing the process of building of several schools to meet the requirements of an increasing population.

“President Al-Sisi opened up a free discussion for nearly three hours with participants about different cases. He listened carefully to our inquires and demands. He warned us about those who wish to destroy confidnece between citizens and state apparatuses,” Mohamed Al-Sisi, a member of a youth media delegation at the tour, told Daily News Egypt.

Mohamed told Al-Sisi that social media communication is a reliable source of information nowadays, due to delays from official information sources or censorship by state media institutions.

“President Al-Sisi agreed with my point of view and confirmed the necessity for a radical change in state media institutions, however noting that this process needs time,” Mohamed said.

Regarding the possibility that the parliament will reject the islands’ transfer of sovereignty to Saudi Arabia, Al-Sisi clarified that a special committee has been established to collect all the necessary documentation about the islands and provide it to the parliament, according to Mohamed.

Another member of the youth media delegation, Emad Khalil, told Daily News Egypt: “I discussed the case of the minors from El-Minya who were sentenced to five years in jail on charges of religious contempt [for a video mocking “Islamic State”]. The president promised to investigate the issue.”

Khalil added that several questions were addressed regarding the governmental development plans in Upper Egypt.

Mahmoud Bassiouny, also a member of the youth media delegation, told Daily News Egypt: “President Al-Sisi said that journalists should pay attention to everything published on social media outlets. He clarified that he is not interfering in their work, but simply asking for accuracy, as some outlets’ coverage of certain cases, such as Regeni and the Red Sea islands, may destroy bilateral relations with these countries.”

One of participants highlighted the obstacles he faces when photographing on the streets, saying that he risks being placed in detention by police forces. According to Bassiouny, Al-Sisi promised to reconsider police measures regarding these matters.

Bassiouny added that Al-Sisi declined to comment on the status of young people in detention and in prison.

Presidency officials made a note of all demands and observations by those participating in the discussion with Al-Sisi, Bassiouny said.

Al-Sisi refuted suggestions that he head and establish a political party, arguing that establishing such a political party will be an unfortunate repetition of the experience with the National Democratic Party, that was met with a huge backlash during the 25 January Revolution, Bassiouny said.