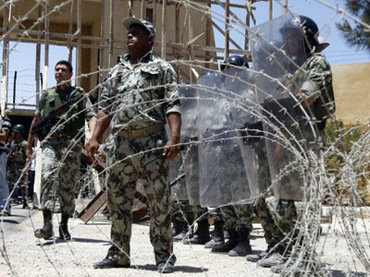 Two soldiers were reportedly injured and three militants killed on Saturday night in an attack that targeted the Armed Forces’ El Masora checkpoint near the entrance to Rafah city in North Sinai.

Sinai-based journalist Ahmed Abou Derea told Daily News Egypt that he was immediately informed of the attack by security sources.

Abou Derea said the attack was carried out by nine militants who drove to El Masora checkpoint in a truck. According to the journalist, this incident was planned to mirror a similar one in March that targeted the Al-Safa checkpoint and led to the death of 15 people.

Abu Derea added that an armoured tank exploded due to the detonation of an improvised explosive device (IED). The tank was stationed at the entrance of Al-Arish city and resulted in a number of soldier casualties. However, no one was reported dead.

Sinai has become the scene of frequent clashes between militants and state security forces. The insurgency in the peninsula peaked after the ouster of former president Mohamed Morsi.

Between death and kidnapping: fate of missing officer still unknown