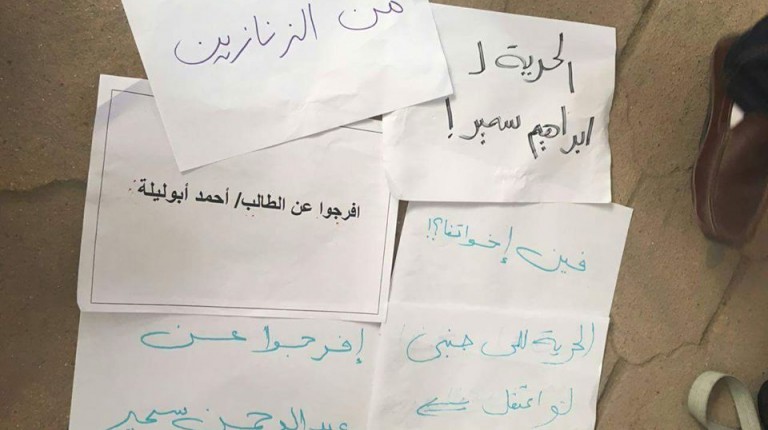 Three students were arrested from their homes on Monday at dawn after they participated in Saturday protests on Tanta University’s campus.

A student-led campaign dubbed “Students will not sell” was launched in the wake of the nationwide movement condemning the recent Egyptian-Saudi maritime demarcation deal.

Students at several campuses, including Cairo University, Helwan University, and others, organised protests against the decision amid restrictive administrative measures.

Saturday’s protests are considered the first on-campus demonstration in over two years. Following a ban on the Muslim Brotherhood in 2013, universities witnessed weekly, and sometimes daily, protests led by pro-Brotherhood students.

Protests often ended with violent dispersals and injuries among both students and security forces, in addition to random arrests and suspensions.

The campaign organiser said severe restrictions were implemented in Cairo University, even before the protest began.

“The students and protest organisers at Cairo University arrived on campus a little bit earlier than the scheduled time. They found security officers at the Faculty of Science, the protest location, already evacuating students and asking them to leave,” the organiser told Daily News Egypt. “They claimed that maintenance work is taking place and everyone should leave.”

According to the organiser, security officers continued to chase them even after they left. “They took our IDs, claiming they were invalid,” the organiser said.

When the students went to the administration to retain their IDs, one of the employees informally told them that they have been monitored and that protesting is not allowed.

Meanwhile, at Helwan University a group of students were briefly detained at the dean’s office after organising on-campus protests, Wessam Atta, researcher at the Association of Freedom of Thought and Expression (AFTE), told Daily News Egypt. Those students have now been released.

According to Atta, protests took place in many universities amid light security restrictions. “We are yet to be notified of any arrests of those students,” he said.

The controversial Protest Law was issued under former interim president Adly Mansour in November 2013, as a deterrent measure to pro- Brotherhood demonstrations. However, it has been used to build cases against several figures accused of dissent.