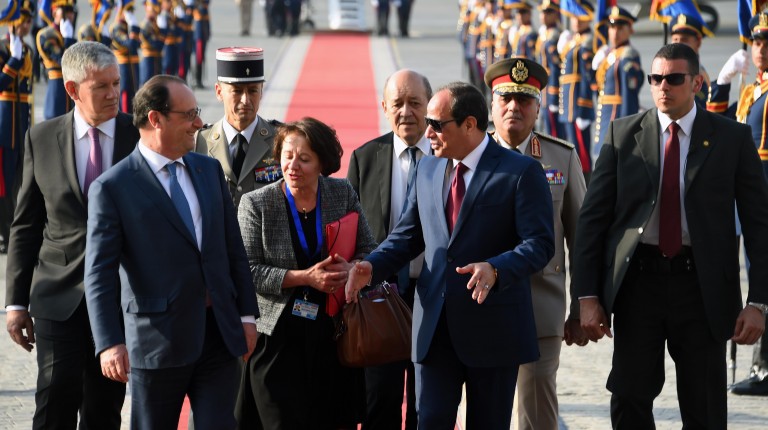 However, the challenges of state security and overpopulation could hinder development, he added.

During his speech at the Egyptian-French Business Forum on Monday, Hollande said France is supporting Egypt in its endeavours to achieve economic development and restore security.

Hollande’s three-day visit to Egypt began on Sunday. He is accompanied by a high-profile delegation, including major French companies. The two sides have signed about 14 agreements in infrastructure and sanitation projects.

According to Hollande, Egypt faces three serious challenges in its endeavours to achieve real development, including the security situation, which still needs further improvement and reform to reassure those interested in investing in Egypt, as well as tourists, especially as the Middle East continues to suffer from disasters, tragedies and terrorism.

“The current Egyptian administration has great ambition to overcome those challenges,” he said, adding that France has decided to support Egypt in restoring security and achieving development through long-term projects.

Hollande ruled out any economic development in the medium or long term without resolving these security problems.

He pointed out that Egypt faces a demographic challenge represented in the overpopulation problem, which is estimated at 1 million births annually. “Overpopulation is a burden on the state in light of the lack of adequate infrastructure and public services,” Hollande said.

The third challenge is the need to create new communities. Egyptians inhabit only 4% of the total area of ​​Egypt. Therefore, Hollande demanded that political leadership quickly develop new areas so as to accommodate for overpopulation and more industries.

Hollande affirmed that French investment in Egypt will increase in the upcoming period, as France is the sixth largest foreign investor in Egypt.

Hollande praised the recent reforms undertaken by the government in terms of legislation related to foreign investments and tax, as well as the recent devaluation of the Egyptian pound against the US dollar by the Central Bank of Egypt (CBE).

“The presence of French companies in Egypt, despite the recent unrest, reflects our confidence in the Egyptian business environment, as French companies did not suspend their work in Egypt since 2011,” Hollande said.

He said French companies in Egypt suffer from lack of financing, requesting that the Egyptian administration help the companies overcome their problems in the local market. He said Egypt and France must both overcome the repercussions of terrorism, which hit both countries recently.

Minister of Investment Dalia Khorshid said Hollande’s visit to Egypt reflects the confidence of the French business community in the Egyptian market and its interest in establishing serious partnerships with Egypt.

The minister predicted that Egypt will attract about $10bn as foreign direct investment during FY 2016/2017, compared to about $9bn investments during the current FY.

According to Khorshid, Egypt seeks to boost bilateral cooperation with France in the fields of electricity transmission and distribution, new and renewable energy, technical training, infrastructure projects, housing, and wastewater treatment plants.

“We are consulting with French companies to benefit from their expertise in the food industries and retail sector, tourism, communications and information technology, as well as the banking and automotive sectors,” the minister added.

The minister revealed that she has prepared a list of ongoing projects in Egypt to present to the French investors and companies, notably the1.5m-acre reclamation project, the New Administrative Capital, and the Golden Triangle in Qena, Safaga and Quseir areas. In addition, the government seeks to build more than 4,800km of roads in two stages during the current FY 2015/2016, representing 20.4% of the total roads in Egypt.

Following the recent economic reforms imposed by the government to safeguard the rights of both the investor and the state, Khorshid hopes to double French investments in the Egyptian market during the upcoming period, as well as allowing private companies to work in the energy sector to meet the growing demand.

Minister of International Cooperation Sahar Nasr said, during her meeting with a number of French and Egyptian investors and businessmen, that Egypt has a wise political leadership that believes in the necessity of attracting foreign investment.

She said that Egypt is full of investment opportunities in all sectors and the government values the role of investment to achieve economic and social development.

The minister noted that the government has succeeded in recent months in restoring the confidence of international financial institutions, noting that this is corroborated by Moody’s Investors Service raising Egypt’s credit ratings outlook to ‘stable’ from its previous rating of ‘negative’.

Nasr called on French companies to intensify their presence in Egypt to benefit from the competitive advantages of the Egyptian market.

Nasr signed two agreements and 10 declarations of intent on Sunday evening, with a total value of €308m, with the French Development Agency and the French government, in the presence of the Egyptian and French presidents.

The agreements include pumping gas to homes, the establishment of wind farms, wastewater treatment plants, and repairing the Heliopolis tram.

Minister of Trade and Industry Tarek Qabil said, during the meeting, that the Egyptian government is committed to continuous reforms in the procedural system to ensure a positive investment climate.

“The Ministry of Trade and Industry aims to develop the local industries by 8% annually, so as to constitute 22% of GDP and provide 3m job opportunities,” he added.