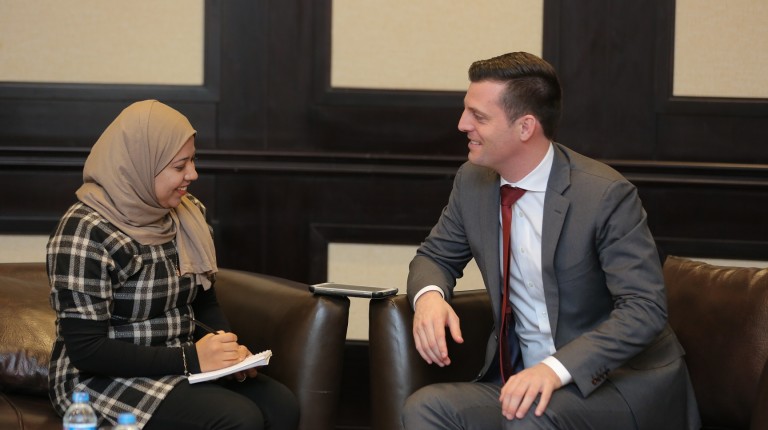 In an interview with the Daily News Egypt, the director of Cityscape Group, Wouter Molman, announced that Cityscape group will launch a new cityscape trade exhibition on the North Coast after Ramadan.

How many new exhibitors presented at the recent Cityscape trade exhibition?

Between twenty and thirty new exhibitors came to Cityscape Egypt 2016, including big names from countries such as Dubai and Cyprus, in addition to Egyptian companies like Madaar Development, Pact, and Capital Group Properties, which is based in Abu Dhabi.

New projects, new stories and new products are offered in the Cityscape trade fair from large exhibitors such as Emaar, Talat Mostafa, and Palm Hills.

What is the average number of exhibitors?

In 2011, we started with probably 50 companies. This number has roughly doubled since that date.

What is your marketing plan to attract exhibitors?

Our biggest challenge is the value of individual brands and marketing more than the number of exhibitors and quantity of sales.

We are considering launching a new Cityscape trade exhibition to take place on the North Coast in the summer. We are finalising the details at the moment, and we are speaking to all our clients to reserve their locations. It would take place directly after Ramadan in July or August. Over a period of six weeks, we plan to hold not just a trade exhibition for real estate companies but we will also invite companies offering residential units, entertainment, catering, and automotives as well.

Why did you select the North Coast?

Cityscape Group aims to showcase premium real estate in Greater Cairo, the Red Sea, and the North Coast.  Sidi Abdel Rahman and Marassi are the most attractive areas on the North Coast.

Investors are focusing on Greater Cairo, Cairo Capital and coastal areas. I haven’t heard of any exhibitors who are interested in investing in Upper Egypt.

Do you think that the current economic circumstances in Egypt may affect investment in real estate sector?

The government is working incredibly hard to try to attract investment and to create a productive investment climate.

On the other hand, there are significant economic challenges including a large budget deficit, inflation, and currency depreciation. Investors consider all of these factors before deciding whether to invest in Egypt.

Government officials and Cabinet members have told me the government is taking steps to reduce bureaucratic oversight that slows down the investment process. Further, the Suez Canal Area Development Project and the New Administrative Capital are great opportunities to create a completely new regulatory scheme that will attract more investment.

Do you think that devaluation of the Egyptian pound will affect real estate investment in Egypt?

After the devaluation of Egyptian pound, people have become worried that bank deposits do not provide security for their assets. Increasingly, people are turning to the real estate market as a place for safe investment which is resistant to the pound’s fluctuations.

What is the average price of real estate units after the devaluation of the Egyptian pound?

Prices vary by location. Most recently, prices increased between 20% and 25% in 2015. However, it is a natural jump in prices due to the increase in the price of imported raw materials due to the pound’s devaluation. Currency depreciation is coupled with a scarcity of supply. Nonetheless, people are still looking for investment opportunities. Increasingly, people are looking to move out of city centres, driving up demand. Those two facts explain the increase in prices.

One might also look at the dramatic increase in the price of land over the last two years.

How do you explain the increased demand to own a second home despite the economic downturn?

We know that people generally view real estate units as safe assets. In addition, Cairo has become an increasingly busy city. The Red Sea and the North Coast provide a very pleasant alternative. In addition, the possibility to rent their properties in these areas to people who want to spend a week away in the summer is an attractive feature. Owners of second home can earn a fantastic profit by renting these units in June, July, August, and September.

Do you think that oil prices would affect Gulf investment in Egyptian real estate market?

It may decrease in the long run, but for now, I don’t see an impact. On the contrary, at Cityscape Istanbul in early April this year, approximately 700 investors from Gulf countries—including Saudi Arabia, the UAE, Kuwait, and Qatar—invested in property in Istanbul.

I can’t see that the investments will decline right now but I do think the long-term economic picture must be taken into account.

Companies compete with prizes, offers to attract clients at Cityscape