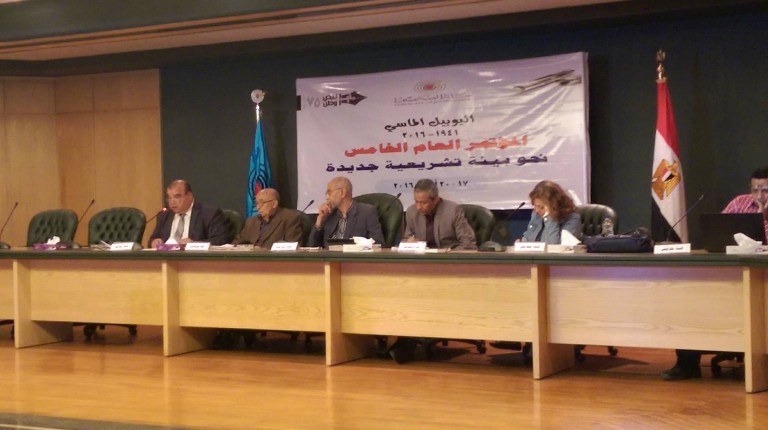 The Press Syndicate held a seminar Monday to address what freedoms journalists have and the laws binding reporters in covering terrorism amid the state’s ongoing war against terrorism.

Monday’s seminar topic tackles a universal conversation over the debate between the free flow of information and restrictions imposed on access to information, specifically when covering terrorism amid the state’s concerns of journalism promoting terrorist ideology.

In 2015, Egypt adopted an anti-terrorism law that defines terrorism, but also lays out strict guidelines on how the media can report on terrorism and militant attacks. The law stipulates that journalists who stray from the state’s narrative or publish “false” news will be fined, and prescribes prison terms for those who seek to “incite” terrorism.

Renowned journalist and former presidential advisor, Ayman Al-Sayyad, opened the discussion forum by defining terrorism as any act which results in bloodshed and includes killing outside of the judicial framework, regardless of the identity of the perpetrators or the victims.

“Now, the question which poses itself is whether a free press contributes to a stronger society and thus empowers the state in its counter-terrorism efforts or not,” Al-Sayyad stated.

On one hand, Refaat Fayyad, editor-in-chief of the state-owned Akhbar Al-Youm, argued that the press and media should be more aware of their role in order to avoid unintentionally serving the narrative of terrorist groups.

“Terrorist groups are conscious of the media’s potential role in promoting and endorsing their ideas,” Fayyad said. “Through a wide media presence, terrorists want the state’s recognition of their influence.”

For Fayyad, the more journalists become aware of the complexity of covering terrorism, the less they would contribute to serving terrorist ideologies. “For example, when covering a statement issued by a terrorist group, our role is to build on their claims and provide more context,” he explained. “For instance, by clarifying and analysing verses of the Quran used by those groups to justify their atrocities.”

By all means, Fayyad opposes blocking information from the public under the pretext of protecting national security. Moreover, he said countering terrorist ideas in the media cannot be based on individual initiatives only, but needs to be part of a common strategy.

“We cannot deprive the people from their right to the truth, but as journalists we need to refrain from dealing with terrorist incidents as scoops and exclusive news stories, but rather put forward accuracy and within a proper context to such aggressions, without exaggerated reports on their ‘victories’,” Fayyad stated.

Al-Sayyad raised several questions to Fayyad’s statements, questioning whether the media can be held accountable in contributing to the expansion of terrorism given the proliferation of other forms of media.

“Terrorism is expanding even without the media, especially considering many groups and individuals do not follow the media in the first place,” said Al-Sarrad. “In that case, what influence do we have by repeating how bad terrorism is in the media?”

Speaking about Egypt’s modern history with terrorism-related activities, he pointed to the state’s actions in oppressing and eliminating Islamists and members of other political groups inside prisons to address the human rights violations which continue amid the war on terrorism.

Abdel Razek continued by saying that the legislative definition of terrorism is broad. To clarify its meaning, he suggested the following definition: “Terrorism is the unjustifiable use of force or threat of violence against individuals, groups, institutions and state entities for the purpose of fostering changes of political, ideological, or social nature or based on standards of discrimination.”

Abdel Razek insisted on the annulment of articles included in the anti-terrorism law that restrict press freedom.

Al-Sayyad concluded by pointing out that the flaws of the anti-terrorism law are those that target civil freedoms rather than actual terrorists.

“How can such laws deter men who have given up their ideologies and lives? How can death penalties prevent suicide bombers? The absence of direct correlation between the law and daily terrorist attacks taking place in Sinai pushes us to reconsider the target group the lawmakers had in mind when drafting the law.”

In July 2015, the Press Syndicate condemned articles in the anti-terrorism law related to journalism, saying that press freedom is the strongest weapon in the face of terrorism.

The law was viewed by the syndicate as a setback to press freedom, which is guaranteed in the constitution of 2014.

222 violations against reporters, media personnel in first 3 months of 2016: JATO