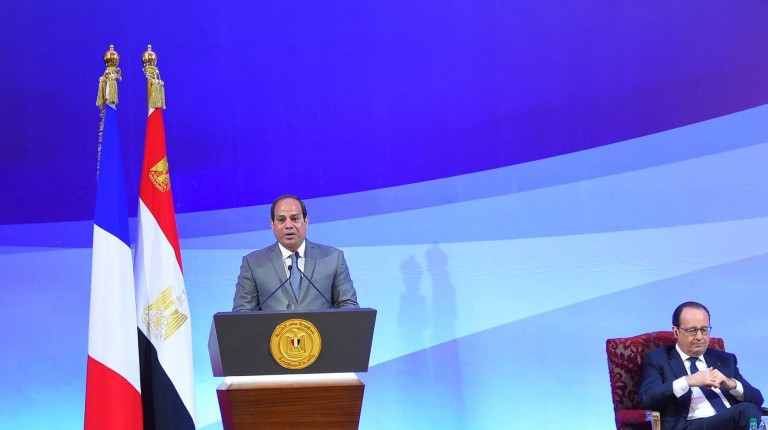 In the second day of his two-day visit to Egypt, French president François Hollande met with several Egyptian politicians to steward French economic interests in transportation and export markets for French goods.

President Abdel Fattah Al-Sisi and Hollande attended the inaugural session of the Egyptian-French Business Forum, during which both presidents affirmed the strength of their countries’ relationship.

“France is considered one of the most important trade partners with Egypt and it represents a large market and vast opportunities for Egyptian exports. In return, Egypt provides French companies with access to Arab and African markets,” he said.

French and Egyptian parties have signed 18 agreements and memoranda of understanding (MOU) since Hollande’s arrival.

Hollande along with members of the French delegation also met with Prime Minister Sherif Ismail on Monday to discuss bilateral realtions. Ministers of Communications, Culture, Petroleum and Antiquities also attended the meeting.

Hollande also visited the Heliopolis Metro Station on Monday where he met Minister of Transportation Galal Said. Said and Holland discussed the latest developments of the third phase of the Cairo metro’s third line, which is funded by the French government and French company VINCI.

On Sunday, following Hollande’s arrival, the two heads of state held a joint press conference to address Egypt’s efforts to encourage tourism. Al-Sisi stated that Egypt is ready to receive security delegations from France, the United Kingdom, and Russia to ensure the safety of their citizens.

Hollande appealed to the strong history of French-Egyptian relations, dismissing current problems as “individual cases” which will be discussed.

Hollande’s visit comes amid heightened tension between Egypt and Italy, and by extension Europe, over the death of Italian PhD candidate Giulio Regeni, whose body was found in February baring signs of torture.

Al-Sisi has repeatedly stated Egypt is ready to transparently cooperate with Italian investigators.

Al-Sisi has claimed Egypt is the target of defamation that aims to destroy state institutions and isolate the country from its European neighbours.

“Our relations with France and Italy are unique and we will never forget the Italian and French support for Egypt in its time of need,” Al-Sisi stated during the press conference.