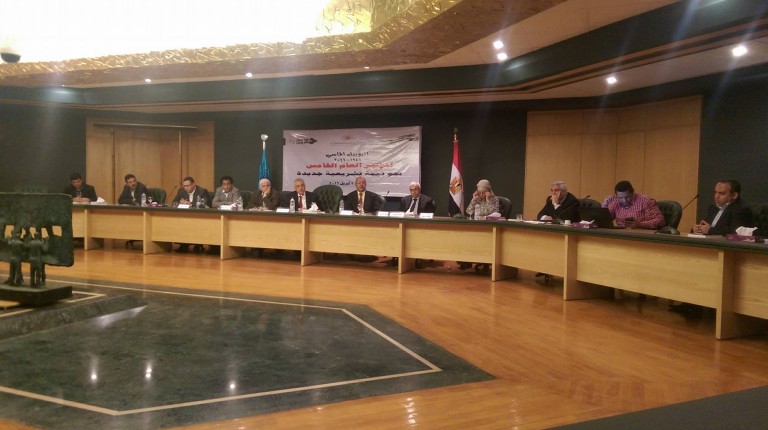 The Press Syndicate discussed the future of national newspapers on Tuesday as part of a series of seminars held this week for its fifth general conference.

The seminar was administrated by Alaa El-Attar, editor-in-chief of Al-Ahram Al-Araby, along with two senior journalists from Al-Ahram and Al-Akhabar. The three journalists noted that the circulation and performance of national newspapers has severely declined.

Abdel Kader Shoheib, former CEO of Dar Al-Helal publishing house, one of the oldest institutions after Al-Ahram, began by exhibiting challenges facing national news institutions. According to Shoheib, national newspapers are in crisis, which is visible on three levels: professionalism, administration, and financial capacity.

Shoheib explained: “First, the national newspapers’ role is limited to being a tool in the hands of the executive power. Second, there is lack of proper internal management. Third, the financial systems of those institutions are deeply flawed and soaked in debt, perhaps with the exception of the Middle East News Agency (MENA), which is allocated a budget by the state.”

Shoheib added that he tried to obtain financial figures on the expenses and debts of national news institutions but the Supreme Press Council did not provide them. “Yet, we know there are huge debts to the banks and state bodies, fuelled by weak profits and a decrease in resources without adjustments in expenses, that are actually increasing,” he added.

Another problem mentioned by Shoheib is the capital of those institutions, especially the human capital, as he argued that news institutions are overstaffed, in addition to lacking professional training.

“According to the latest numbers I obtained from the Supreme Press Council, there are nearly 24,000 employees in national news institutions of which only 4,000 are journalists. Three-quarters of this number works at Al-Ahram, Al-Akhbar, and Al-Gomhoureya newspapers,” he stated, adding that with the absence of training, experience is no longer being transferred from the old to the new generations.

Despite this, Shoheib admitted that there is an abundance of national newspapers. He stated, however, that there is a decrease in audience and circulation, amid a general decline in newspaper readership in comparison to TV and internet media.

While Shoheib suggested finding fast solutions to debt problems, perhaps by selling national newspapers to private owners, he recognised the difficulties of such practices in safeguarding the jobs of existing journalists.

“We need a vision and a timeline to correct the path of national news institutions, which I believe have great potential due to their history in the press and their rich archive, but we still suffer from a lack of  culture aimed at developing human capacities,” Hegazy argued.

He concluded that in order to achieve reform, there must be an improvement in journalists’ situations, especially in the application of wage equality and training programs, and most importantly the concept of accountability towards administrative, financial, and professional performance.

MENA Deputy Editor-in-Chief Ali Hassan said: “the well-being of national newspapers is jeopardised by personal interests, and we have seen administrative boards that opposed laws defining their term to two years.”

As so, Hassan concluded the progress or setback of national newspapers is conditioned by the reinforcement of laws and a mechanism to evaluate performances.