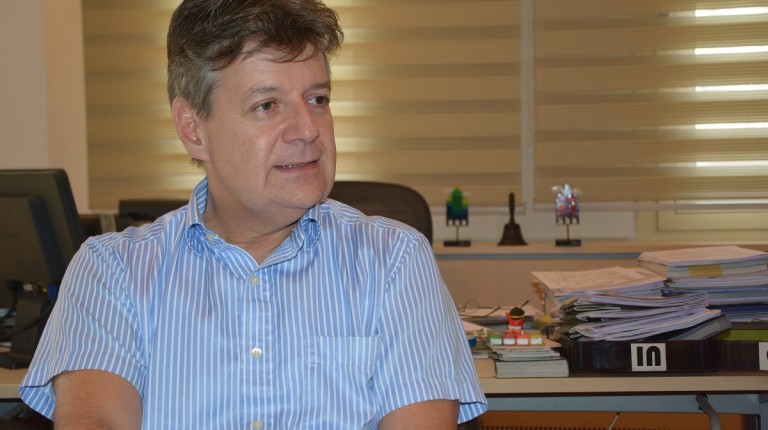 The German delegation currently visiting Egypt consists of 150 people and companies, including representatives of 85 companies from all sectors of economy, with 35 companies coming from the energy sector alone. The delegation is headed by German Vice Chancellor Sigmar Gabriel.

How many companies accompanied Vice Chancellor Sigmar Gabriel? Do you forecast a resulting boost in investments?

We had 150 people from 85 companies with the Vice Chancellor from all sectors, with 35 from the energy sector.

We are very keen on finding partners in Egypt for photovoltaics, wind energy as well producing renewable energy from biomass through the incineration of garbage. We believe that there are still a lot of opportunities in the market and there is a lot of knowhow on the Egyptian side, therefore a partnership is important to us.  In addition, we have companies that are interested in infrastructure, so we invited Ahmed Darwish Chairman of the General Authority for Suez Canal Economic Zone to give a presentation on the Suez Canal project.

Are there German companies visiting Egypt that are interested in the Suez Canal Area Development Project?

I am absolutely convinced that it is going to happen; we already have active German companies in Egypt, such as DHL and Siemens. The Suez Canal project, for example, needs energy, which the Siemens [power plants] projects are working toward. So, all of these projects are coming together.

Can you tell us the outcome of Vice Chancellor Sigmar Gabriel’s meeting with president Al-Sisi?

During the meeting, they tackled problems faced by investors, and if this is done, we will see results quickly. One of the problems is transferring profits in US dollars abroad, and the bureaucracy surrounding this.

However, this visit is obviously an opportunity to find quick solutions for German investors.

What agreements were signed during the visit?

We signed the contracts of the Linde Group, Tahya Misr and Tahrir Petrochemicals Corporation that will form a large chemical complex, and I think it will be the biggest in the world.

In addition, REC, a German company that produces millions of high-quality solar panels for global customers, signed an agreement with O Capital for Services and Contracting, a fully-owned subsidiary of Orascom Telecom Media and Technology Holding (OTMT).

What is your forecast for the volume of trade between Egypt and Germany by the end of current year?

The Egyptian Minister of Industry announced that the trade exchange is expected to reach €6bn, instead of €5bn in 2015, and I think it is a very realistic estimation because of the new contracts that were signed during the visit and the Siemens projects. Therefore, an additional €1bn would be added to the trade volume and investment in the Egyptian market.

Do you expect import and export between the two countries to be strengthened?

We have already facilitated business for agriculture companies at Fruit Logistica, as Egypt is a country with a warm climate, which means the whole trade fair was focused solely on Egypt and that companies successfully conducted business there.

I would like to see more industrial goods from Egypt in the electronics and LTC sectors because Egypt can make more money from these products. This is because agriculture products such as potatoes are cheap but electronic products are more expensive.

Minister of Industry and Foreign Trade Tarek Qabil issued a decree at the General Organisation for Export and Import Control (GOEIC) to register foreign factories that export to the Egyptian market. Have you received any complaints from German companies regarding this decree?

Yes, there were complaints, but our chamber agreed with the ministry to handle the applications, which helps the German side because they can communicate with us in German, so we are collecting applications and sending them directly to GOEIC. We do agree on registration with the GOEIC because it protects the market from counterfeit products.

We do not have German companies from this sector in this current delegation visiting Egypt, but last week there were some automotive companies from Bavaria that wanted to buy components from Egypt.

Yes, German companies are interested in Egyptian automotive components, like brakes and tubing, as Egypt is a competitive market.  We have contacted the Engineering Export Council and we are still in talks so we do not have any agreements that have been signed yet.

How much money do you estimate is required to import Egyptian automotive components?

It depends on how much Egyptian producers can deliver.

What are the current requests from Egypt to invest in Germany?

We receive requests from Egyptian businessmen from all sectors all the time. The most famous is Sherif Ezzat who has a company that manufactures medical appliances.