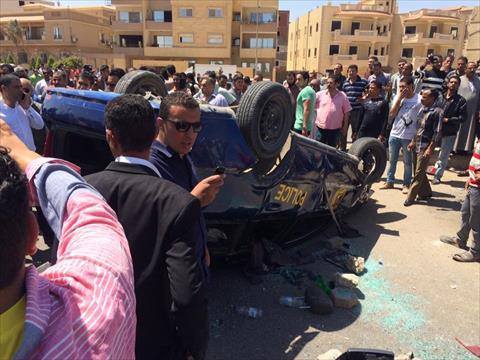 Following widespread social media reports, the Interior Ministry confirmed that a low-ranking police officer killed a man and injured two other on Tuesday morning in New Cairo, after a quarrel erupted over the price of a drink.

“The shooting took place on Tuesday morning. During the presence of police officer El-Sayed Zeinhom in front of Gate 6 of Rehab City in New Cairo, a dispute erupted between him and a tea vendor over the price of a drink,” a ministry statement read.

The dispute spiralled, and the low-ranking police officer opened fire, which resulted in him killing the vendor and injuring two bystanders,” the statement continued.

The statement confirms narratives that were widely circulated on Tuesday morning through several social media outlets.

Several social media users published photos and videos that they claimed to have captured to document the incident. They claimed, through posts on Facebook, that a low-ranking police officer shot a citizen and injured two others using a gun, and that the officer was beaten by citizens who witnessed the shooting.

“When I was on my way to attend a course, a low-ranking police officer got out from a police patrol vehicle. He suddenly pulled out a gun and started shooting, targeting a citizen who was killed and two other persons who were injured, after they got out of a minibus during the shooting,” an eyewitness told Daily News Egypt Tuesday.