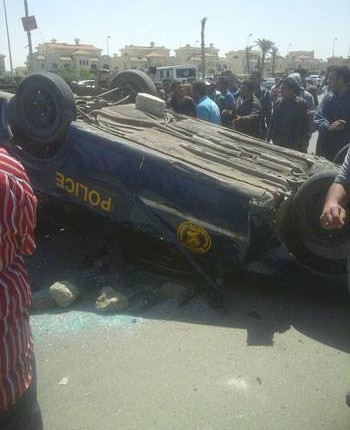 President Abdel Fattah Al-Sisi called Minister of Interior Magdy Abdel Ghaffar in for a meeting on Wednesday, following the killing of a street vendor on Tuesday by a low-ranking police officer in the Rehab compound in New Cairo.

Al-Sisi urged the minister to ensure complete accountability, stating that any responsible police officer or person must be tried and punished promptly, according to the law, a presidential statement said Wednesday.

Al-Sisi also discussed with Abdel Ghaffar the legislative modifications suggested for the Police Law, which he ordered to be completed rapidly.

These suggested legislative modifications are scheduled to be discussed in parliament when they are completed, aiming to enhance police officers’ awareness of the correct procedures for dealing with citizens.

Meanwhile, the East Cairo Prosecution ordered on Wednesday the detention of the law-ranking police officer accused of killing the drinks vendor. He is to be detained for four days pending questioning, according to state-run newspaper Al-Ahram.

Investigations with the officer began on Wednesday and continued for 12 hours. The officer reportedly denied all charges of killing a citizen with police weapon, and claimed that he was targeting armed masked persons on a motorcycle.

Prosecution investigations revealed that a dispute had erupted between the low-ranking police officer and a tea vendor over the price of a cup of tea, prompting the low ranking police officer to use his gun and open fire against the vendor, who was killed. The officer also reportedly injured two citizens on a minibus who were passing by the scene of the crime.

Following the incident, eyewitness Ahmed El-Zoha told Daily News Egypt on Tuesday that, while he was on way to attend a course, he saw a low-ranking police officer exit from a police patrol vehicle inside in front of Gate 6 of Rehab City. He suddenly pulled out a gun and started shooting, targeting a citizen who was killed and two other persons who were injured, after they got out of a minibus during the shooting, according to El-Zoha’s account.

The Interior Ministry later issued official statement in which it confirmed the narrative circulated on social media. Abdel Ghaffar said on Tuesday evening that any violating officer or official in the ministry will be immediately referred to trial.