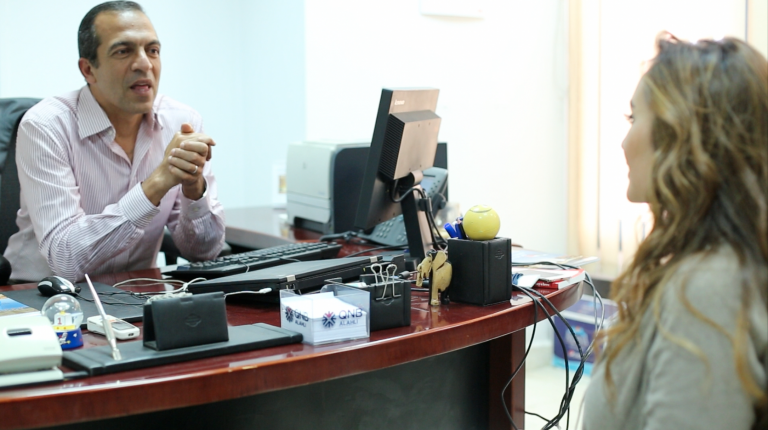 New waves of applicants are vying to join the Presidential Leadership Programme, founded By Khaled Habib, who is seen by some as the guru of optimism and ambition.

Habib graduated from the Faculty of Engineering at Cairo University, and chose a different career path than expected. First in business, then in media, and later he worked as a business consultant to multinationals, an HR manager at also another multinational organisation, a radio presenter, and a lecturer. Habib said that each time he joined something new it added to his experience and way of thinking, which contributed to his PhD in Business from Edinburgh University.

Habib’s passion is working with people directly and helping them to develop their skills. He finds this to be the common ground between all the different activities in which he partakes, whether it be teaching students, contacting people through media, or working on their development in the corporate world.

The restructuring and transformation practitioner said he was contacted by the presidency and asked to design a programme targeting young people between 20- and 30-years-old. Habib said the programme’s goal is to: “develop professionals who are capable of succeeding and excelling at any field they work in.”

The programme is straight forward with no hidden agendas. He said it is only designed to give the outcome of: “a professional, positive, creative, competent young man or woman who can work in any field.”

“This is an intensive programme,” Habib said. At the end of the eight-month programme, students will present their graduation project upon which they receive assessment.

Teaching political courses is a point of controversy. Some say it will be used to influence the political ideology of the youth demographic, while others claim it will push young people to join a pro-state political party.

Habib justifies the programme’s teaching by saying that the only motive behind it is to raise young people’s political awareness, so that if they want to “play politics, they know how to play politics because they understand how the model works”.

He assures that they are not taught political biases but rather they are oriented to how the Egyptian political system operates and are given the tools to make up their own minds about a certain situation or issue.

Habib designed the programme, but is not part of the delivery process. He said the programme is based on “experiential learning” which depends on learning through projects and ideas the students come up with for different governmental bodies. He also adds that each student should do 30 hours of creativity, activity, and service (CAS), similar to the International Baccalaureate Diploma.

The programme is mainly designed to prepare these students to become influential in governmental bodies, yet it does not limit them from working elsewhere in the private sector, or even from establishing their own private businesses.

The programme assesses students’ skills and abilities throughout the courses and their final project. This assessment keeps track of each student’s strengths and weaknesses and will make up their reference for future employment.

Habib mentioned, as an example, the ceiling for salaries which deprives them from hiring high-cost experts to manage the whole programme. Guest speakers and lecturers, who are considered role models in entrepreneurship or leaders in their field, are highly sought after to assist the programme.

Another obstacle is the mandatory involvement of several parties and entities, which makes decision making tedious and difficult, especially when it comes to financial decisions.

As an HR specialist, Habib said the main thing Egyptian employees lack is self-awareness, especially with regards to the need for further development, which leads them to blame their flaws on someone or something else. In many areas, the productivity level is low alongside morale and a lack of work ethics, Habib said. Many employees lack the ability to set clear objectives and achieve them. Team work is not always a successful work model, he added, since often employees do not know how to disagree respectfully and constructively, especially in the absence of clear operational mechanisms.

He attributes this to several factors: poor education, bad management, lack of vision, and lack of good leadership. These causes are long-standing and insidious in Egyptian society, he said.

The media is chaotic and unethical, says Habib. “Go anywhere in the world, and you’ll see that they would never do what we do over here,” he said. He further illustrated his point by saying that Egyptian media lacks an ethical model. As an example, he said it is inappropriate for a TV presenter to be on screen for almost five hours “shouting and screaming” like political leaders.

Some private sector channels do not have a viable economic model either; they are severely in debt yet continue operations in order to serve the owners’ personal interests, Habib said.

Habib said he stopped appearing on screen as a TV show host because he is too unpredictable. People mistake his criticism of an act or incident as criticism of the person. People take things too personally, which is why many of Habib’s signed contracts were cancelled. “I made it a point to never say anything that I don’t believe in,” he said.

In response to what he would do, hypothetically, if he had a position in the cabinet, Habib said the laws must be looked into. Annulling or changing several laws is the top of his priorities in solving many issues that hinder achievement and development. Not one official has appeared in the media to the public with a clear vision that is narrowed down into clear objectives with a specific timeline. Habib said that by reforming several laws and regulations many problems will be solved automatically.

Al-Sisi becomes less popular, nobody can bet on how Egyptians can change in future: Khaled Ali

In a league of his own: Sisi’s loving embrace