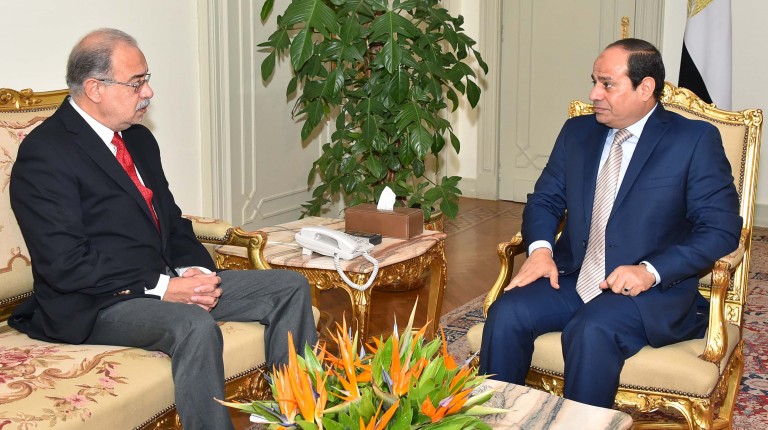 The Egyptian presidency impugned a media report detailing meetings between President Abdel Fattah Al-Sisi and his aides, in a statement issued Thursday.

“The presidency expresses extreme resentment of the content that has been published on Al-Shorouk newspaper’s website, which included misleading information attributed to anonymous sources, about meetings between the president and his aides, in particular security officials,” the statement read.

On Wednesday evening, the privately owned Al-Shorouk newspaper published an online story entitled “President orders not to allow the repetition of ‘Friday of the land’ demonstrations on 25 April.” The article quoted unnamed sources who calimed that Al-Sisi commanded his aides to tighten security ahead of the protests, while blaming their “lacklustre” performance during last Friday’s demonstrations.

“The newspaper should have verified the news before publication, according to journalism rules and ethics,” the president’s office stated. Al-Sisi met with Interior Minister Magdy Abdel Ghaffar on Wednesday and a number of security officials. However, according to a presidential statement, the encounter focused on the low-ranking police officer who shot and killed a tea vendor in New Cairo’s Rehab city.

Hundreds took to the streets in governorates across Egypt on 15 April, chanting against Al-Sisi and demanding the annulment of the Egypt-Saudi maritime borders’ agreement, which allocated the Red Sea islands of Tiran and Sanafir as Saudi territories. Police arrested over 100 protesters on 15 April. While, most protesters were released, between 30 and 50 protesters remain detained and face potential legal cases on charges of breaching the Protest Law, illegal assembly, and obstructing roads.

The prosecution has charged several protesters with affiliation to the Muslim Brotherhood, which the government banned as a terrorist organization in 2013.On Tuesday, a Cairo court denied 25 protesters a release and renewed their detention for two weeks. In Alexandria, police continue to hold two juveniles in custody. Moreover, security forces arrested students in the Assiut and Tanta governorates nearly a week after the Friday protests, according to reports by local NGOs and political parties engaged in the protests.

In a recent development Tuesday, rights’ lawyers reported that the Assiut detainees were granted a release.

The arrests come against a backdrop of several political forces renewing their calls for protests on 25 April. The demonstrations will continue to contest the transfer of the two Red Sea islands which was announced during the visit of Saudi King Salman bin Abdul Aziz in April.

In a meeting on Wednesday, the Socialist Popular Alliance Party (SPAP) decided to open its offices to allow members of the public to sign a petition entitled Egypt is not for Sale. The party also called for protests in Cairo and Alexandria.

“The agreement violates the constitution by ceding the islands of Tiran and Sanafir to Saudi Arabia, despite the fact that they are indisputably Egyptian land, and that Egyptians sacrificed their blood in defense of the islands,” the SPAP stated Wednesday.

Along with several parties of the Democratic Current bloc, SPAP announced the formation of the Popular Committee to Defend the Land, with the participation of political parties like Misr Al-Horreya, the Egyptian Social Democratic Party (ESDP), Al-Karama, the Popular Current, Al-Dostour, the Bread and Freedom Party, and the Egyptian Communist Party.

In Pictures: Pro-army protesters chant in praise of Al-Sisi outside Mostafa Mahmoud mosque