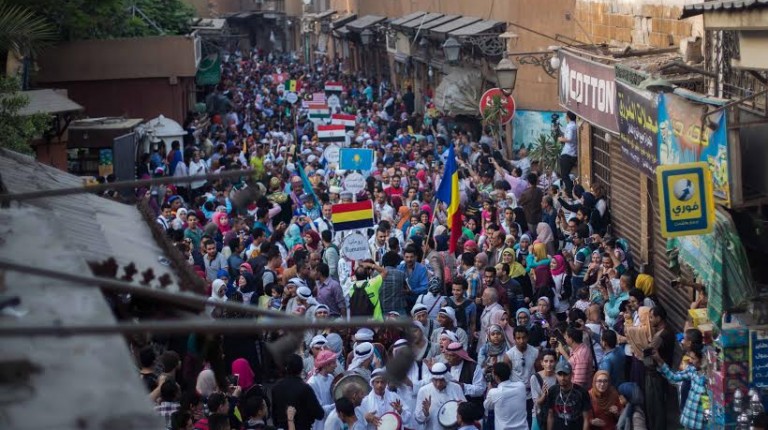 Hoping to revive tourism and to introduce different musical and cultural themes to Egyptian streets and cultural centres, the Ministries of Culture, Tourism, Youth and Sports in cooperation with the Ministry of Planning and International Cooperation have launched the fourth round of the International Festival for Drums and Traditional Arts.

All the shows will be held between 19 and 25 April. India was chosen to be the honorary guest at the festival.

“In the past, drums were mainly used as a method of alerting wars, so to take an instrument which was originally used to accompany fear, worry, and pain and make something out of it that combines beauty, art, and happiness was our main target,” said Seham Ismail, the festival’s executive manager.
The opening ceremony was held at the Citadel under the supervision of Entsar Abdel Fatah, the founder of the festival. A number of historical and cultural places were chosen as the backdrop for hosting the shows, including Sultan Al-Ghuri Complex, the cultural palaces of Banha, Portsaid,  Bahteem, Moez Street, Talaat Harb cultural centre, the children’s civilization and creativity centre, and a number of theatres such as Al-Midan Theatre in the Cairo Opera House.

Organised by the Ministry of Culture with the support of the Ministry of Youth and Sports, the festival mainly aims to promote tourism and create an atmosphere of positivity. “We want to make people happy and raise the happiness vibes in their spirits,” said Ismail.
Over 5,000 people attended the opening, in addition to the 3,000 who stood at the door waiting in case there was more room inside.

Apart from playing music and percussion instruments from different cultural and artistic backgrounds, the festival also sought to introduce the Egyptian and foreign audience to the traditional clothes of each participating country.

The idea of the festival began in 1990; however, it wasn’t until 2012 that Ismail was able to turn his dream to welcome the beauty of international drums art into a reality.

Ismail said the festival managed to do what politicians have failed to do for years: combine the heritage and culture of 22 different countries from around the world and bring them together.
We did not believe the festival could be met with such overwhelming love and care by the audience, continued Ismail.

11mm Football Film Festival kicks off more international than ever