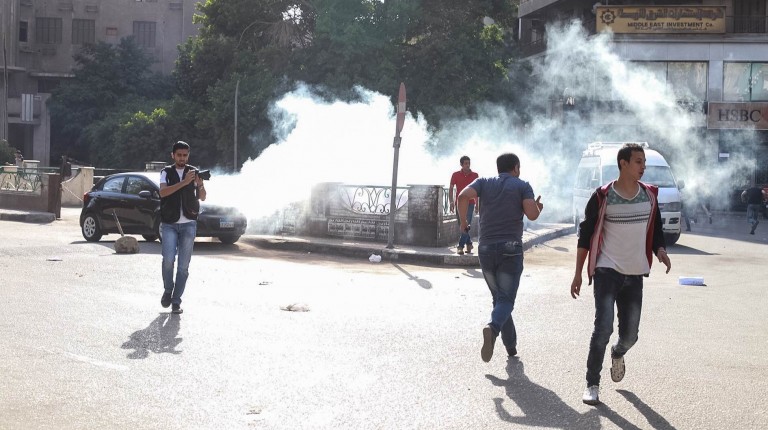 On the night of 23 April, in a small space in the East Cairo prosecution office, everyone had to rely on paper fans for air, amid a scarcity in the cramped room.

Young people were sitting on the floor, most of them waiting to see what would happen to their friends. They were joined by parents of the 13 people arrested from cafes or their homes between Thursday and Friday. Two of them were released, while others were jailed for four days pending investigations. The next day, prosecutors ordered their detention for another 15 days.

Everything began on Thursday evening, at Ghazal cafe in downtown Cairo. Police forces raided the café and arrested some of its patrons, including Mahmoud Zayed, Mohammed Mustafa Abdel-Muttalib (Ausu), Basem Sharaf, and Sameh Hanin among others.

Sameh Samir, a human rights lawyer, was present at Ghazal cafe at the time of the incident. He stopped the commander of the police force and repeatedly asked him to release the detainees. The commander responded: “Stay out of it”.

According to Samir, he then demanded to ride with the detainees in the police car, but his demand was ignored and the force moved on. Samir said the police then roamed downtown until they settled at another cafe.

Fifteen minutes away from Ghazal cafe, a group of friends who all work in the press sat at Al-Fallah cafe on Qasr al-Aini Street. These friends included sports reporter Mohammed Sultan, Al-Masry Al-Youm cartoonist Makhlouf, and photographer Reem Abdulrahman. While leaving the café, they were met by a police force dressed in plain clothes.

The officers directed their words to Sultan, asked him to show his ID, and then arrested him. They did the same with Makhlouf. After that, they told Abdulrahman, who provided the details of this arrest, to “go away now, we’re not taking girls today”.

Makhlouf said, as soon as he entered the deportation vehicle, he found Mahmoud Zayed and Ausu, detainees from Ghazal café. He said all the journalists and lawyers were released near the Supreme Court, except for Sultan.

When Makhlouf demanded that Sultan be released along with the other journalists, the leader of the police force told him: “only those who were released now can go.”

It was 3:30 am when a retired engineer, Nabil Abdel Salam, woke up to heavy knocking on his door in 6th of October City. A 15-person police force, some of them wearing masks, climbed up the stairs leading to his flat. At the building’s entrance, two armed vehicles and a microbus were parked.

One officer asked Abdel Salam about his son, Ahmed, who is a communications engineer with a passion for diving and a busy schedule. After talking with his father, the officers stormed into Ahmed’s room, searching through his belongings, including a camera, mobile phone, and his laptop. They sat down with Ahmed alone for 30 minutes, before taking him to one of the armed vehicles.

Not more than 90 minutes had passed when Abdel Salam received a phone call from his daughter-in-law, who is married to his other son Mohamed, an auditor at Adidas. Mohamed is a father of two, Ziad, aged three, and Farida, five. With her voice shaking, Mohamed’s wife told Abdel Salam that Mohamed was also arrested at his house.

Abdel Salam searched in police stations throughout the city to find his two sons. He first went to the police station in Nasr City—the head officer said neither of his sons were there. On Friday noon, Ahmed called his mother and told her he was being kept at the same Nasr City police station. The family sent him food and beverages, even though the police had not officially admitted he was being held in custody there.

According to Samir, since investigations about Thursday night ended, no official information had been released regarding the location of detainees. This continued until Saturday morning, when they had their first hearing.

The defendants were at first sent to the Supreme State Security Prosecution, which did not affirm its jurisdiction in the cases. They later ended up at the East Cairo Prosecution office, which accused the detainees on nine charges, including incitement, the use of force to overthrow the government, promoting violence through social media, and spreading false news.