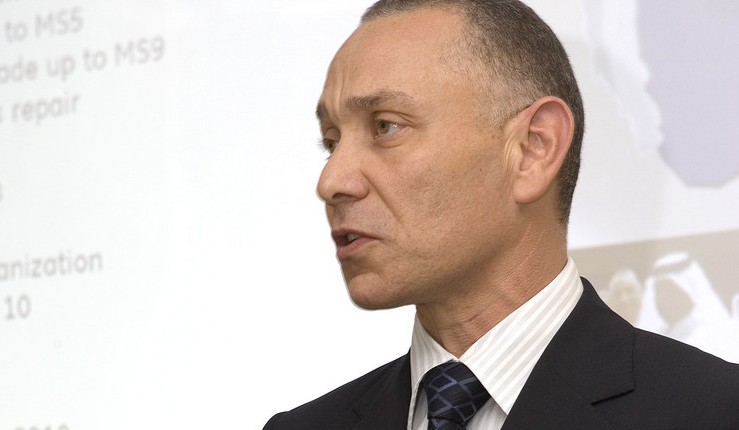 General Electric (GE) plans to invest $340m in the Egyptian market this year, $200m of which will be directed to establish a multi-modal manufacturing and training facility in Suez.

In an interview with Daily News Egypt, GE President and CEO for North East Africa Ayman Khattab said the company is currently in negotiations with a foreign oil company operating in Egypt to participate in the development of the oil field in the Mediterranean.

Can you detail your career and experiences before you were appointed as CEO of GE?

I began my career in 1987 as a field engineer at Schlumberger and assumed several leadership positions at the company in more than 14 countries around the world over 21 years. I joined GE in 2008 as general manager of the Oil and Gas sector in the Middle East, North Africa and Turkey. From 2013 to 2016, I worked for Basin holdings, an investment group focusing on manufacturing and providing services to the emerging companies in the oil and gas sector. I am now the CEO of the company for North East Africa region, which includes Egypt, Libya and South Sudan.

In which areas can Egypt benefit from the company?

We are ready for any business in the field of infrastructure, especially in the energy sector. We have the capabilities to help in the field of oil exploration, and electricity production and distribution, as well as delivering it to houses, in addition to the provision of services in the field of transport and health. For example, we have acquired more than 60% of the engines of EgyptAir’s fleet. The company has significant experience, which can help it provide many technological solutions that suit the Egyptian market.

Moreover, we implemented a project in cooperation with the Ministries of Health and Communication to link six hospitals in remote places to radiology centres in Cairo, to provide citizens with ease of access and for doctors to have support in these diagnoses. Currently, there are about 24,000 devices produced by GR in Egyptian hospitals.

What investment opportunities are there in the Egyptian market?

Egypt is currently filled with many opportunities, especially as the government is looking to improve the services provided to citizens. There are opportunities in the areas of health, transport, and electricity, especially as Egypt needs to increase the efficiency and productivity of its electricity network. In the oil field, of course, there are opportunities in the new gas field, Zohr, in the Mediterranean. The government is jumping on the trend to mix new and renewable energy sources.

GE is in negotiations with a foreign company in Egypt in the oil sector to participate in the development of an oil field in the Mediterranean. Currently, GE has about 550 employees in Egypt, 70% of which are young people.

Are negotiations being held with the Egyptian government or Eni regarding the Zohr field?

There was an agreement with the Egyptian government to revive the urgent plan of enhancing the efficiency of the electricity grid, what are the results of this agreement?

We already signed an agreement with the Egyptian government in December 2014 in order to implement this urgent plan. Within six months of the signing, we were able to install 46 gas turbines in 14 different locations around the republic, in order to add about 2.6 GW of electricity to the Egyptian electricity grid, which is considered a record globally.

We are currently working on developing the combined cycle power plants in Assiut and west of Damietta, in cooperation with an Egyptian company, which will eventually help raise the plants’ efficiency from 1.5 GW to 2.25 GW. This is expected to be completed before summer 2018.

The company has manufactured 135 gas and steam turbines in Egypt, with the capacity to produce 14.8 GW of electricity to the Egyptian electricity grid. This amount is enough to meet the demands of more than 14m homes, and we are ready to continue the urgent plan if there are governmental plans in this aspect.

What are your plans in the field of renewable energy in Egypt?

The Egyptian government’s plan is to increase the share of renewable energy to amount to 20% out of total electric energy used by 2020. This is an ambitious plan that we hope to take part in, especially in the field of electricity generation through wind turbines.

We are negotiating with the Ministry of Electricity to take part in these projects, whether in terms of providing technological, financing, or operational solutions, in addition to negotiations of other projects in the transportation sector.

What are the company’s investments in the Egyptian market?

What are the company’s plans for the centre?

The centre will include production lines to manufacture turbines and the components of wind power plants. It will also include a place for training in order to improve the efficiency of the Egyptian market’s human resources in the areas of energy, health care, and information technology. Moreover, we plan to make it an export centre for the Middle East region.

The centre should be operational in 2017. GE is completing the final procedures to obtain a piece of land in the Suez Canal Area Development Project. The centre is expected to create 500 jobs over the next five years.

What are the results of GE’s partnership with Petrojet?

We established a strategic partnership with Petrojet in 2011, through which we have created a centre to manufacture oil pumps. It is the first time in the company’s history that these pumps manufactured outside the United States, and during the past five years, 1,000 units of oil pumps have been manufactured.

What is the size of the company in the region?

What new technologies will GE focus on?

We are currently working on implementing the ‘Internet of Things’ technology in our equipment through the installation of sensors linked to applications via the internet. This will enable the company to check up on equipment or turbines. Therefore, we can detect potential machine breakdowns before they occur, which helps to reduce breakdowns and guarantees that power plants will remain operational.

Recently, you announced your cooperation with the American University in Cairo. What type of cooperation is this?

We have concluded an agreement with AUC Venture Lab at the American University in Cairo, which aims to support entrepreneurs, mainly entrepreneurship incubator projects, with $100,000, and to help them turn their ideas into real solutions.

We plan to implement this kind of cooperation with other universities so that the largest possible number of young people can take advantage of our experience. We will focus on entrepreneurs working in the energy and electricity sectors.

Moreover, an agreement was signed with the Arab Academy for Science, Technology and Maritime Transport in 2010, through which the Dynamic Positioning Centre has been established to train sailors. This centre is one of only 12 centres in the world that are qualified by the Nautical Institute (NI).

The centre provides a five-day training course at the centre itself, instead of 30 days at sea. Through this cooperation, about 1,000 students have been trained so far.

Has the dollar crisis in the Egyptian market affected GE?

The crisis of providing dollars is temporary. We are not facing the same problems faced by other foreign companies operating in Egypt because we make our products ourselves abroad, so we have the ability to obtain grace periods for repayment.

EIP to set up regional direct investment fund of $100m