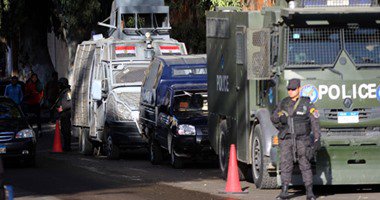 State security forces intensified their presence in main squares and streets in various governorates, following calls for protests on Monday against the maritime border demarcation deal that would transfer Egyptian sovereignty over Sanfir and Tiran islands to Saudi Arabia.

In Minya, police forces received orders to surround churches, military locations, and important institutions, in coordination with the armed forces, in addition to creating a plan to confront any riots or attempts at vandalism, according to state-owned Akhbar Al-Youm.

Meanwhile, according to state-owned Al-Ahram, three members of political parties were arrested for organising a protest on Monday at noon in Mahalla city, which is the largest city in Gharbeya and a hub for frequent protests. Protests in Mahalla in 2008 have repeatedly been cited as one of the triggers of the 25 January Revolution.

In Suez, police forces, in cooperation with armed forces, undertook periodic security patrols amid intensive security presence at the gates of the governorate, according to state-run MENA.

Similarly, security forces intensified their presence in the governorates of Port Said, Assiut and Fayoum.

The Freedom and Justice Party, the political arm of the outlawed Muslim Brotherhood, reported Monday morning the beginning of several protests in the governorates of Sharqeya, Daqahliya, and Kafr El-Sheikh, according to photos on the party’s official Facebook page.

Protesters conducted two small marches in Beni Suef. Despite harassment from security forces, the protesters continued their demonstrations, according to a Facebook page named 25 January 2011.

Muslim Brotherhood-affiliated marches took place at Alexandria’s Al-Raml train station and Montazah district, and in Minya Al-Qamh in Sharqeya and Kafr El-Sheikh, calling for the regime to step down.

Mohamed Ramadan, a lawyer in Alexandria, told Daily News Egypt that protests in Alexandria were supposed to start at 4 pm. However, security forces were deployed across all districts, preventing protesters from demonstrating until they found a safe area.

A lawyer from the Association of Freedom of Thoughts and Expression (ATFE) in Alexandria confirmed to Daily News Egypt that seven people were randomly arrested hours prior to the planned demonstrations.