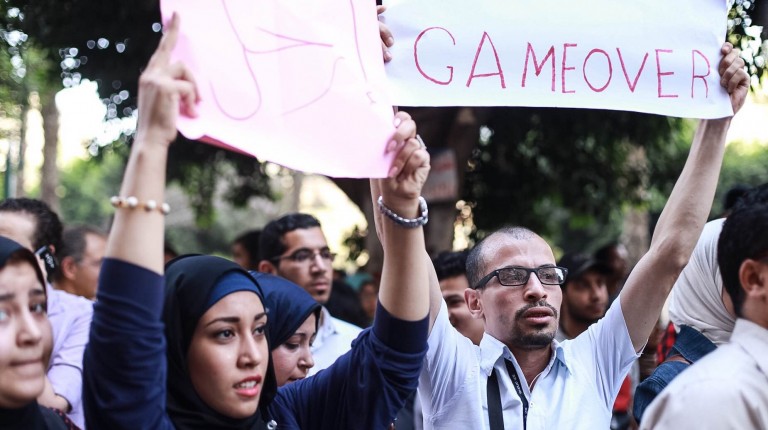 Following nationwide protests on Monday that came in defiance of a security raid, during which police raided homes and arrested people from cafes, the number of protesters detained and their fate remains unknown.

Several reports were published by human rights organisation, including the Front of Defense for Egyptians Protestors (FDEP), which indicated that at least 239 people were arrested in the aftermath of Monday’s anti-government protests.

The protests were held in objection to the maritime demarcation decision that transfers sovereignty over Tiran and Sanafir islands to Saudi Arabia, pending parliamentary approval.

Police forces dispersed protesters with force in Cairo and other governorates, followed with random arrests of bystanders without any follow-up investigations, according to numerous testimonies in a statement issued by Democracy Indicator on Tuesday.

The campaign of random arrests allegedly resulted in the detention of nearly 300 citizens and the dispersal of 10 protests, including those in Nahya and Dokki in Giza, two in Sharqeya and one in each of Daqahleya, Damietta, Luxor, and Aswan.

A report by the Egyptian Commission for Rights and Freedoms (ECFR) alleges that the number of people arrested during Monday’s protests is estimated to be 233, which includes 19 journalists and 40 women.

Cairo topped the list of Egypt’s governorates with the highest number of arrests, with 82 reportedly detained, many of whom were arrested from near the Press Syndicate and in other areas downtown. Meanwhile, in Giza 50 people were arrested, mostly from Al-Mesaha Square in Dokki and Faisal, according to ECRF statistics.

“While we were peacefully demonstrating against the maritime demarcation decision in Al-Mesaha Square, police besieged us and started firing tear gas to disperse the protest. I ran towards a building and the guard allowed us to hide there,” a female detainee who was later released told Daily News Egypt on Tuesday, on condition of anonymity.

“Several plainclothes detectives followed the guard into the building and asked for our IDs and insulted us. They ordered us to get into a minibus with number of girls, among them a French journalist,” she continued.

The female detainee was then transferred with others to Dokki police station, where they were all released later. However, the police forces refused to return their identification cards, she said.

The demonstrations broke out on Monday in Cairo, Giza, Alexandria, Ismailia, Daqahliya, Sharqeya, Damietta, Menufiya, and Sohag, and were met with a strict security clampdown.

The ECRF report indicated that governorates other than Cairo and Giza also witnessed the detention of several citizens in the aftermath of protests. In Sharqeya, 35 people were arrested, while in Alexandria 19 were detained, with 11 in Qalyubia, 10 in Damietta, seven in Sohag, five in Gharbeya, four in Daqahleya, five in Aswan, and two each in Menufiya, Beni Suef, and Ismailia.

A source in the Interior Ministry told Daily News Egypt that no official statement has been made yet regarding the number of arrests over the Monday protests. The source, however, rejected the term “detention”, stating that those arrested were taken due to unlicensed protesting.

Moreover, a number of violations were reportedly committed against several journalists during the protests. This prompted journalists to call for a protest on Tuesday evening in front of Press Syndicate against the closure of the street leading to the syndicate in downtown Cairo and for preventing them from entering it.

In addition, they are protesting the reported detention of 46 journalists who were covering Monday’s protests, according to an event created by journalists on Facebook.

“I was arrested while passing through Tahrir Square, where a police officer informed me that walking in the square is prohibited and asked for my ID and my cellular, which I refused to give him,” journalist Basma Mostafa, who was detained for a short period on Monday then released, told Daily News Egypt on Tuesday.

“The police officer then ordered a low-ranking officer to arrest me and put me in a police vehicle, where I was held alone. They then transferred me to another vehicle with a number of other people who were arrested,” she continued.

Basma said they were transferred to Al-Gabal Al-Ahmar camp in Nasr City, where they were questioned over the nature of their work and the purpose of their presence in Tahrir Square.

“They treated me well, and then they asked us to leave,” she added.

79 protestors referred to trial on Saturday, 48 of them released

In Cartoon: Talat Harb in the Saudi version