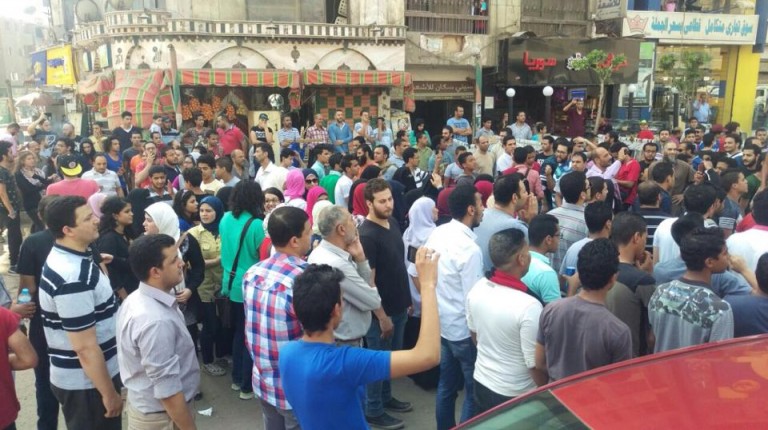 Egypt’s Press Syndicate decided Tuesday to file a complaint to the prosecutor-general against the Ministry of Interior and Cairo’s chief of security, accusing them of mishandling journalists following a series of arrests and attacks during Monday’s protests.

The syndicate strongly condemned assaults on journalists by security forces during Monday’s protests. At least 46 field reporters and photojournalists were arrested while covering protests across Egypt. Six of those arrested remain in detention.

Journalists Shams Nabil, Ali Abdeen, Bakry Hamdy, Mohamed Nagah, Ahmed Mhamed Mostafa, Mohamed Abdel Wahed, and Asser Osama have yet to be released, according to Khaled El-Balshy, deputy head of the Press Syndicate and head of its Freedoms Committee.

On Monday, the police cordoned off the syndicate and its surrounding streets, banning journalists and members of the syndicate’s council from entering the building.

“Security forces commissioned groups of thugs and transported them in buses to the syndicate. They attempted to break in, chanted against journalists with the most demeaning words, and chanted that they were traitors and agents,” the syndicate said on Monday.

The syndicate formed an emergency operations room as reports of journalists being arrested increased on Monday. Eight statements released by the syndicate on Tuesday, counting the detained and denouncing violations against journalists, such as arbitrary arrests and brutal searches.

According to Demo Meter, a monitoring device run by the independent Democracy Index organisation (DI, formerly the International Development Centre), there were at least 53 journalists detained, including 51 Egyptians and two foreigners from 26 different media outlets, of whom 42 were released.

According to reports that unfolded throughout the day, security forces targeted journalists from all types of newspapers and websites–state-owned, private, and party-affiliated–including TV channels. Among them were Al-Akhbar, Al-Watan, Al-Fagr, Al-Wafd, Sawt Al-Umma, ONTV, Al-Mesreyoon, and many others.

However, other credible sources reported higher numbers of foreign journalists being arrested, including those of Danish, Norwegian, and French nationalities.

Two journalists from a news website named Al-Tareeq were detained for a short period. After their release, their accounts were published by the Journalists Against Torture Observatory (JATO). Mostafa Reda, the editor-in-chief of the website, was arrested near downtown Cairo, and was transferred to Al-Gabal Al-Ahmar security camp in Nasr City.

“I was arrested at the same time the police arrested two journalists from Dotmsr website—Basma Mostafa and Mohamed El-Sawy. All of this happened after we were asked to present our IDs and press cards, and the police had made sure we were journalists,” Reda told JATO.

Journalist Hisham Mostafa, who works for the same website, said he had been detained for over an hour and a half inside a prisoner transportation vehicle, which was parked near the Press Syndicate. “I started screaming from inside that I was a journalist until syndicate member Mahmoud Kamel heard me as he was passing by and helped me out,” Mostafa told JATO.

El-Balshy told local TV Tuesday evening that in Dokki police station alone 12 journalists were detained, and El-Balshy himself was banned from entering the station.

El-Balshy runs Al-Bedaiah news website, of which one of its journalists was attacked while waiting for a colleagues in front of the Dokki police station. The journalist, Mohamed Atef, reported that the police used anesthetic spray on his face, which caused him to faint.

Journalists were accosted despite having support from their newspapers to report on Monday’s protests. Ali Abdeen, who works for Al-Fagr news, told JATO that Al-Fagr sent a notice to prosecution authorities confirming Abdeen was assigned to cover the protests, prior to his interrogation.

In other cases, journalists were reportedly threatened by their employers to not get involved in Monday’s events.

Monday’s protests had been called for to object to the Egyptian-Saudi maritime borders agreement that transferred sovereignty of Tiran and Sanafir islands to Saudi Arabia. The protests, limited in numbers, were quickly dispersed by police, who used teargas and force.

In Pictures: Journalists turn out in large numbers for syndicate conference