The Egyptian government has reopened the issue of the property tax law and, in 2014, announced that it seeks to amend it. The processes of implementing the tax law and its progress have, however, remained shrouded in secrecy ever since.

Arguments over the law’s efficacy have become more frequent, as the majority of Egyptian homes are not registered in the Egyptian Real Estate Registration Office.

The estimated value of property taxes is EGP 2.4bn, according to the minister of finance’s adviser for taxes Amr El-Moneir.

El-Moneir added that this figure is still under study and must be approved by parliament before becoming effective. The ministry expects to collect EGP 1.1bn of the aforementioned figure, the minister’s aide said.

He added that previous estimates set for collected taxes were exaggerated. 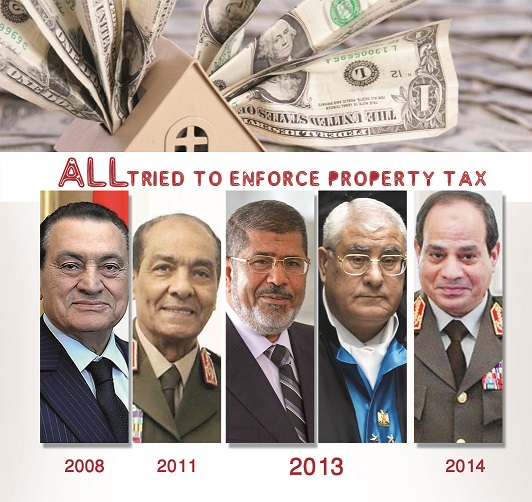 Efforts to impose the property tax law have been recurrent but the actual ability to enforce it has proved challenging.  The first attempt to apply the property tax law, or the real estate tax law, was in 2008 but the legislation’s implementation has been delayed several times since it was issued.

Parliament’s 2008 law was heavily criticised and therefore was never applied.

Property taxes were addressed again in 2011, following the 25 January Revolution, with the Supreme Council of Armed Forces (SCAF) proposing a law and saying it would be applied in January 2013.

The law was never applied. However, following his appointment to office, former president Mohamed Morsi proposed his own tax law and said the law would be implemented by fiscal year (FY) 2013/2014.

Morsi’s proposed tax law was amended to include commercial and industrial units as well as residential units.

The ousted president’s government also decided that non-profit organisations, hospitals, orphanages, and schools would be exempted.

Once again, the proposed law was never applied, as Morsi was ousted before the date for the law’s implementation had arrived.

In November 2013, with an interim government leading the country, talks on the law’s application re-emerged. The government’s version of the law was a close reflection of the one proposed by ousted president Morsi.

The new introduction would promise 50% of collected taxes to marginalised areas.

“The previous law exempted the owners of residential properties worth EGP 500,000, disregarding the collective value of the number of homes owned by one person, and this did not achieve social justice,” a statement from the ministry said at that time.

The property tax law was scheduled to take effect in July 2013, but was postponed due to political turmoil in the country.

In March 2014, then interim prime minister Ibrahim Mehleb announced that the government approved a draft law to amend the 196/2008 property tax law.

Mehleb said that committees would be established in every governorate to determine property tax values by surveying and evaluating properties’ rental values according to the condition, geographical location, and associated facilities.

In July 2014, the Egyptian cabinet announced that it passed the new tax law. The cabinet asserted that applying such a law would help increase tax revenue by 25%.

The increase in collected revenue would be allocated to the development of marginalised areas, the cabinet said. The cabinet-approved law exempted residents who owned properties valued at less than EGP 2m.

On 20 September 2014, the Egyptian Tax Authority announced that it starting collecting taxes for 1.5m residential and non-residential units. By March 2015, 6.3m tax notifications were sent to residential units, and 1.8m commercial, industrial, and service units, including approximately 1,000 factories.

“I have instructed the heads of the Real Estate Tax Authority and its affiliate directorates to take all measures necessary to facilitate dealings with the public and resolve any problems that may occur by applying tax law and its amendments on newly-built real estate units,” then finance minister Hany Kadry Dimian said.

How is the current property tax calculated?

The former minister of finance’s advisor for property tax Tarek Farag explained that the current law applies to all but “those with properties valued at EGP 2m or less”.

“If an owner has one private residential unit that is used for him/her or his/her family, worth over EGP 2m, he/she will pay the taxes,” Farag continued, explaining that if the annual rental value of a property is less than EGP 24,000, there will be an exemption.

“If an owner has several residential units, say three villas, he will pay taxes for all of them but he will still receive the EGP 24,000 exemption for the unit he mainly resides in,” Farag went on.

For commercial units, the law applies an exemption to those who own a unit with an annual rental value of EGP 1,200 or less.

Will the property taxes meet expectations?

“We have been trying to apply it for more than two years and the budget anticipates expected revenue from the property tax to be between EGP 3bn to 3.5bn,” said parliament member and former head of the ETA Ashraf Al-Araby.

Al-Araby added that, following the first year of its application, collected property tax amounted to EGP 350m, about10% of the estimated EGP 3bn.

In the second year of its application, the real estate tax collected is around EGP 1bn, about 33.3% of the anticipated EGP 3 bn.

With a high population of 91 million, the cost of property tax collection can be high.

“The expenditure on collecting the tax is higher than the collected tax,” Al-Araby went on. “If this continues then we would be wasting our time.”

Al-Araby said that if the cost of collecting the tax continues to exceed the value of collected tax then the tax applied should be revoked.

The reason for such a high cost of collection is due to the dependence on humans to do all the work, Al-Araby added. He explained that the tax collection system should be electronic.

“The fact that the government was able to collect EGP 1bn is a positive thing,” she said, highlighting that the system implemented to collect real estate tax is “extremely expensive”.

On whether or not the government would need to pass a law that obliges citizens to list their properties in the Real Estate Registration Office, Al-Araby said that “it will not be necessary”.

“There is visual evidence that the property units exist,” he said. “The law does not address the individual; it is more concerned with the property.”

The tax is still facing resistance from citizens, however.

“There are still no clear criteria for evaluation and the vision remains unclear so naturally people continue to reject the tax,” Al-Araby said.

El-Moneir said the government is currently studying means to lower the cost of tax collection.

Taxes will not increase, methods for tax collection will be modified: Finance Minister