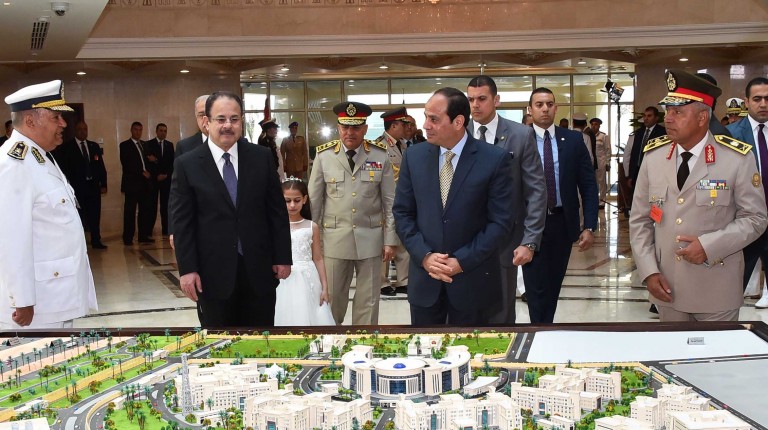 President Abdel Fattah Al-Sisi inaugurated Wednesday the new headquarters of the Ministry of Interior in New Cairo, transferring the heavily secured institution from the middle of the crowded capital to its outskirts.

Al-Sisi was accompanied by Minister of Interior Magdy Abdel Ghaffar and Prime Minister Sherif Ismail during the inauguration.

Several divisions and departments in the older headquarters have already been transferred to the new ministry building.

Close to the Police Academy, where most of the high profile trials take place, the new headquarters stretches over 20,000 sqm, including a whole building for the minister of interior, as well as departments of technology, public relations, officer affairs, media and communications, as well as bunkers for conscripts.

The vicinity of the complex also contains two important apparatuses of the Central Security Forces and Homeland Security.

Officials at the ministry gave a presentation of the new headquarters to the president.

Al-Sisi, however, voiced his objection to 1,000 conscripts who are assigned to secure the vicinity. He told the minister of interior, as well as police and army officials accompanying him in the visit, that “this is too much of a cost”.

He asked: “Why did we leave [the old building] if we have 1,000 conscripts to secure the area. Those 1,000 might cost EGP 12m. We should depend on technology and security cameras.” He advised that there should be trained individuals to intervene in the case of any danger instead of “making a person be stationed in his place for 24 hours”.

As the inauguration took place, songs by the Emirati singer Hussain Al-Jasmi were playing in the background.

The new headquarters was constructed over a two-year period by the Egyptian army’s Engineers Corps. The cost of the construction, however, was not announced.

The latest transfer is part of the government’s strategy to remove state institutions from downtown and transfer them to the outskirts of Cairo.

Last January, the Governorate of Cairo announced that the bureaucratic Tahrir Mogamma will be shut down while alternative venues for its departments are provided in other areas.

The Ministry of Interior was previously located in downtown on Al-Shiekh Rehan Street. The building has been heavily fortified in recent years, due to its proximity to Tahrir square, which has been a centre for protests since the reign of former president Gamal Abdel Nasser.

On the roof of the ministry building in downtown, snipers were stationed by the police, who were later accused of killing protesters in 2011. However, no officials or police officers were trialed for the violation, with the ministry denying the existence of a sniper division in the apparatus.